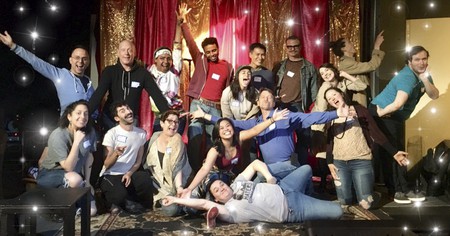 The cast from ‘The Gang’s All Queer,’ one of the Pride-themed plays featured during the 2018 season of Pint Sized | © Rob Ready

Anyone looking for a cheap yet quality night of fun in San Francisco should consider heading over to PianoFight in the Tenderloin. The bar’s Pint Sized Plays series offers affordable entertainment and a unique night out in the city with mini theater performances that take place right in the bar.

There is only one rule for Pint Sized Plays: each play must take place in a bar and end by the time one of the characters finishes a beer. The idea started in 2010 as an annual festival at Nob Hill’s Café Royale under the aegis of local playwright and director Stuart Bousel. In 2016, co-founder Rob Ready helped move it to the bar at PianoFight and turned it into four series of six plays a year.

PianoFight is a theater powerhouse. In addition to the bar-restaurant that hosts Pint Sized, the venue boasts 50-seat and 100-seat theaters. Some 25 programs are regularly scheduled throughout the week, offering everything from burlesque to drag, magic, clown shows, video-game tournaments, live podcasts and every kind of music imaginable. 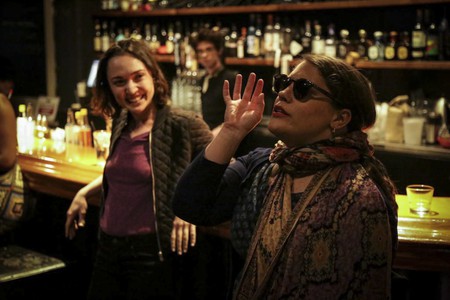 Pint Sized injects the PianoFight roster with a rawness and immediacy. While the typical script might take years to coalesce from print to stage, Pint Sized Plays are thrown together in just one or two months.

The truncated timeline allows playwrights to engage with the zeitgeist and focus on local issues. Ready says, “The speed of the process lends itself to picking up on whatever people are thinking about right now. Three years ago, we didn’t have a lot of Donald Trump stuff. And, of course, now we do. A few years ago, not much about #MeToo. Now, a bunch of stuff about #MeToo.” 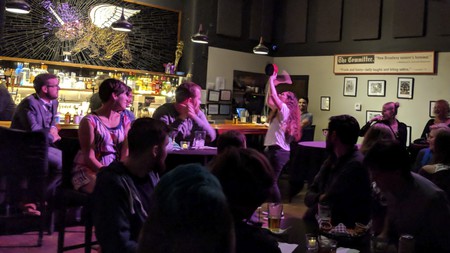 Siobhan Doherty, one of the show’s key producers and a company member at PianoFight, says, “There’s a lot of freedom for responding to the current moment. Being in the Tenderloin helps to bring home some of the issues that our city has, especially wealth disparity and what it means to be a community, and how to keep the arts going.”

The series produces new works by a range of voices from beginning and established writers. Often, their subjects are told as comedies, with writers likely feeding into the lighthearted energy of the surrounding pub space. Doherty and the other producers ensure that each iteration of the series offers a balanced roster of plays. Musical numbers and serious works are folded into the mix to keep the evening dynamic and flowing.

“We try to find ways to break it up,” says Doherty. “Some submissions seem to get stuck on the fact that the play is taking place in the bar, so some topics come up over and over, like a beer-drinking competition or blind dates. We get enough submissions, though, where we can break up those patterns.”

The 2018 selections were given a new twist with the addition of themes for each series. February’s plays, for instance, all had an aspect of being “Drunk in Love,” à la Beyoncé. April homed in on “Choose Your Own Adventure” stories, while June was all about “Pride.” 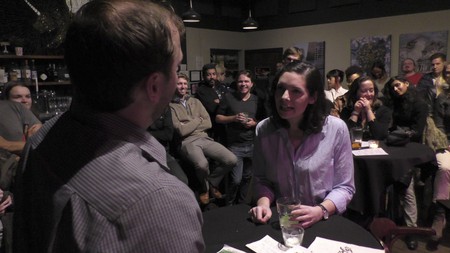 The Pint Sized environment offers freedoms that might seem alien to more casual theatergoers. If another part of the bar has a better view, audience members are welcome to (quietly) migrate. Absconding for the restroom is also far easier to achieve without being an annoyance. Shy folks should know ahead of time that there’s a chance that a character will briefly pull them into the story. While audience-interaction bits are more likely to happen at Pint Sized than in a more usual play setting, it’s done tastefully and avoids veering into the obnoxious. 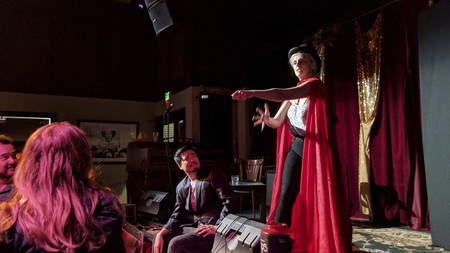 Ultimately, the atypical nature of the evening is the point. Pint Sized is the embodiment of one of PianoFight’s core values: democratizing theater. Ready says, “It’s all about showing people that theater can be something you and your buddies do for fun on a random weeknight. That’s also why it’s important to us that it remains free.”

Doherty says, “PianoFight and Pint Sized mean a lot to me, personally. We don’t want anyone to feel like they can’t participate.”