Everything You Need to Know About California’s Slab City 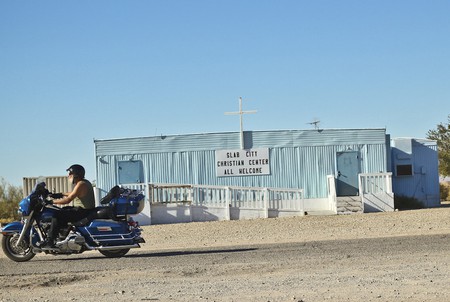 On the ruins of a former military base, Slab City is home to off-the-grid snowbirds and artists, some of whom refer to it as “the last free place in America.”

Slab City lies in Imperial County, California, east of the Salton Sea, about an hour’s drive north of the Mexican border. The desert community tends to remain barren in the scorching summers but attracts some 2,000 snowbirds escaping chillier climates come winter. Year-round, about 150 people call Slab City home. Sometimes they call it The Slabs instead. There are no public utilities, so residents typically live in RVs and rely on solar power and generators. For gasoline and provisions, residents can drive to the nearby town of Niland, which only has a population of about 1,000.

The town’s history dates back to World War II. In 1942, the Navy Department set up a U.S. Marine Corps base on over 600 acres in the Sonoran Desert. According to the Military Museum, they built about 30 structures, 8.2 miles (13.1 kilometers) of paved road, and various utilities. WWII would end in 1945, and the Department of Defense returned the land to the State of California in 1961. The military buildings were torn down, and only the concrete slabs remained. Thus, those that would come to settle the area later began referring to it as Slab City.

The first people to live in Slab City may have been a group of workers hired to harvest creosote leaves in the 1960s; they set up trailers in the area. Others soon followed, until Slab City became a known desert haven for curious and creative drifters, retirees, artists, dissenters, and others. The conditions might be harsh at times, but for some, eschewing the trappings of society for sun-bleached freedom is a fair trade. 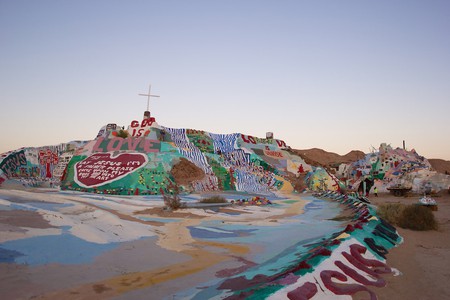 One of the most notable landmarks of the community is Salvation Mountain. The massive, colorful sculpture was the years-long work of late artist Leonard Knight, who built it from adobe and straw. Charlie Russell, a friend and collaborator of Knight’s, founded East Jesus.

East Jesus is an arts community where visitors will find a vast collection of assemblage art made from refuse and other re-purposed materials. Visitors can camp in East Jesus for a couple of days at a time, assuming they pony up the $15/night donation and agree to a list of strict rules enforced for both their own safety and the serenity of East Jesus residents. These rules include a note about how, given the lack of sewage or plumbing in the area, human waste is composted.

The Range is Slab City’s venue, its stage home to a variety of musicians and performers. Visitors might catch a Saturday night show, or, if they’re lucky, the annual Prom. In the spring, hoards of music festival-goers at Coachella’s annual Southern California-based desert event flock to the neighboring Indio Valley, often making pit stops in the illustrious Slab City during their weekend-long journeys. 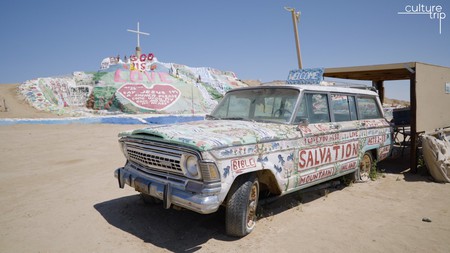