The Fascinating History of Levi's

Heritage is a word that’s thrown around in the fashion industry, often by brands that have no real history to speak off. One company that deserves the title is Levi’s, who invented the first blue jeans in 1873. In fact, they’re so authentically cool that the San Francisco headquarters at Levi’s Plaza sits next to the buried remnants of a gold rush era ship. Nancy Garcia meets Levi’s archivist to learn more about this fascinating company. 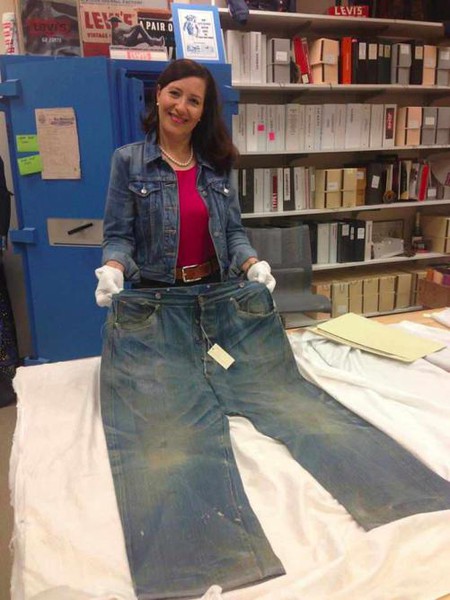 The history of how Levi’s went from supplying work wear for miners, to one of the most iconic fashion brands in the world is fascinating. The story is told in part by their archive; an extensive collection of vintage denim and historical documents that number over 5,000 pieces, and is overseen by Levi’s enthusiastic historian, Tracey Panek.

The lobby of the Levi’s building houses an exhibition space called the Vault. This area, which is open to the public, has revolving displays of Levi’s denim worn by celebrities such as Beyonce, as well as historical garments.

For our interview, Tracey takes me inside of Levi’s private archive. In the back is an enormous safe, which holds a half a million dollars worth of artifacts. The Levi designers use the archives as a reference point for the Levi’s Vintage Collection, which meticulously reproduces historical garments.

NG: Tell us about the Archive.

T: The most important garments are kept in a fireproof safe, because they’re irreplaceable. In addition to having a monetary value, they tell the cultural story of the brand, and by extension – the story of the American West.

[Tracey invites Nancy to don a pair of white gloves, and they carefully unwrap the oldest pair of blue jeans in the world. They are worn to soft blue perfection and completely intact – it’s hard to believe they’re over 140 years old.] 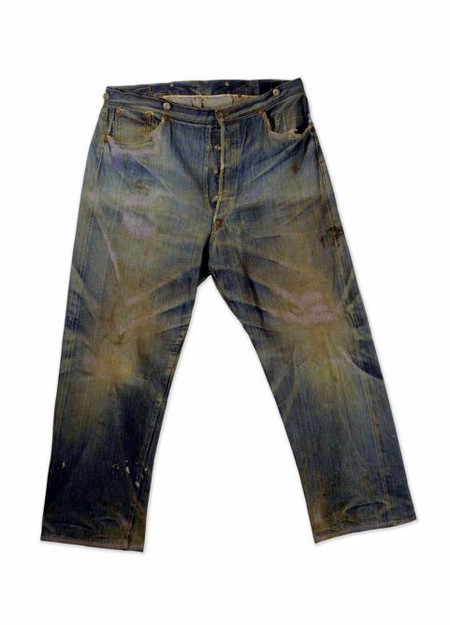 NG: Wow – Tell us about this piece.

T: This is the most important and oldest piece in the collection. It’s is a pair of jeans we call the XX (double X), they date to 1873.

T: That’s right. At that point in history, they weren’t called jeans – they were called waist overalls, and were intended for work, not leisure. They were intentionally cut full, too – for the laborers and miners who bought them. These pants were meant to be worn over your clothes, and the buttons at the waist were for attaching suspenders – this was before belt loops. Say you were working in one (a mine), you would pull these over long underwear, or even pants. At the end of the day, workers often left them overnight in the mines.

NG: California’s population increased enormously with the gold rush. Did that create a market for work wear?

T: Absolutely. Levi Strauss & Co. started out as a dry goods and furnishings business. In 1873, he (Strauss) took out a patent with Jacob Davis for the copper rivets, which reinforced the seams better than any other pant on the market at the time. He decided to use heavy denim, a traditional work wear fabric to create the world’s first blue jeans. Those jeans were like cardboard when new. Real work gear. Back then; the tag line was “Cut Full – Honestly Made.” 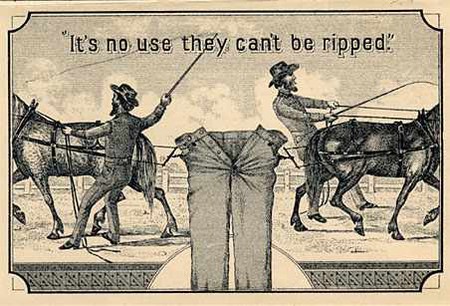 T: The early success of the Levi’s brand came from using copper rivets to reinforce the seams in the pockets and the crotch. The elements that make up the first jean were: the button fly, a watch pocket, the rivets bearing the patent date, the cinch in the back and buttons for suspenders. The leather patch with the two horses. And on the pocket – you have the iconic Levi’s sewn-on mark, called the “arcuate.”

NG: It’s very interesting that the arcuate isn’t sewn perfectly – the double stitching is crooked. Is that because of early sewing machines?

T: Back then manufacturing was very uneven. Early production was not made entirely in plants (factories). We’ve even seen advertising in San Francisco directories of the time for home sewers – some manufacturing was made in plants, some given to home sewers. You see it most noticeably in the arcuate, because of the curve. The design is slightly different on every garment. Back then, there were only single needle sewing machines, too. Production is so perfect now, the machinery so advanced. It’s incredible to see a commercial garment sewn imperfectly – you really see the hand of the maker imprinted on it, it’s so special.

[Tracey takes another pair of jeans from their muslin cocoon. There’s a lot of wear at the stress points, but the rivets have kept it all together. Some of the samples she’s shown are more like bits of fabric clinging to copper rivets.] 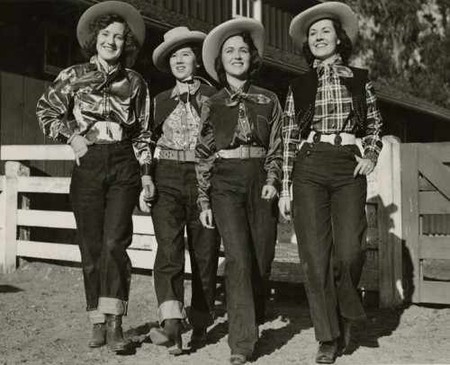 T: This is called the Calico. For a while, this was the oldest pair we had. A woman who found them when she was a teenager donated them to us, and there’s an interesting story behind it. In 1945, a young woman named Barbara Hunter Kepon was hiking the high desert in California, near the historic Calico mine. She must have been a very curious person, because despite not having a flashlight, she went deep into an abandoned mine shaft. At one point she “felt air coming up on her feet”, and started digging out dirt and rocks, until she found the opening into a room. Inside, there was a pile of men’s jeans. Barbara dusted off a pair, took them home and wore them for years during high school.

NG: She wore them?

T: Yes! She had no idea of their age. She said they were “the thing” in her high school. Until she noticed what was written on our early label – “for over 17 years ours jeans have been before the public – this is a pair of them.” That’s when she realized she must have had a very early pair of jeans, and luckily for us, she contacted the company to ask if we wanted a donation.

NG: How do you know all this?

T: She got in touch with us again last year – and came in recently to visit her teenage jeans – she is in her 80’s now. The whole story, with photos and her original letter is in the vault right now, on display. 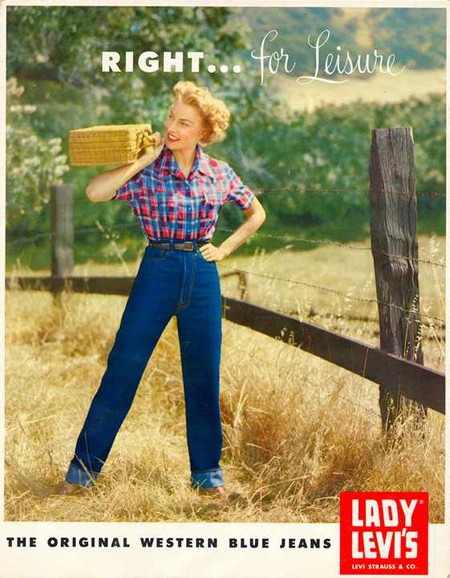 NG: What a wonderful story. She wore men’s jeans throughout high school in the forties – so this is the original boyfriend jean! I guess there weren’t jeans for women then.

T: No, all of the jeans so far in Levi’s production were the evolution of the 501, men’s jeans. Even women working on ranches wore men’s jeans – until we came out with the 701 Lady Levi’s in 1934 – the first women jeans. I’m going to show you an original pair of these.

NG: Wow – they’re so high waisted – and the waist size is tiny. But I guess garments in the 30’s were very high waisted, especially pants. Did mostly women in the west living on farms wear these?

T: We were mainly selling in the west, except in a few locations, but something very interesting happened in the thirties. Dude ranches suddenly became the rage, and people in the east would travel to the west to stay at working cattle or dude ranch. So they wanted to have a western experience and they wanted to dress the part. We even have a Vogue magazine from 1934 I’m going to show you.

[Tracey pulls out a magazine]

Here’s a feature article in Vogue about what to wear when visiting a Dude ranch, and it says right here: “The thing to wear is a pair of Levi’s, cuffed; cowboy boots, a Stetson and a bandana.” And it says you must “wear it with an air of bravado.”

NG: So Levi’s were available in the East after that?

T: Yes. As a matter of fact, on this pair you can see an added label with the owner’s name – Harriet Atwood — and a store label that says Best & Co. That department only existed on the East Coast back then. By the time we got to that era, we had sizes on the patches. But as you can see Harriet didn’t want her size known, so she cut the label off. 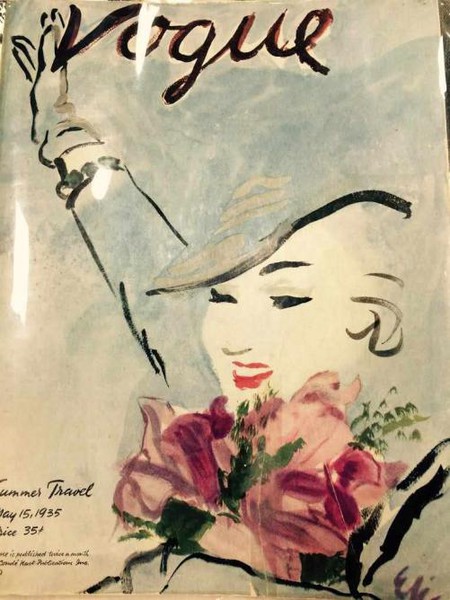 NG: So Levi’s went from work wear to fashion in this way?

T: Yes, the development is that Levi’s started creating fashion by responding to fans and consumers. The fits changed dramatically through the years, and they started experimented with finishes.

NG: This history is fascinating, can you tell us a bit about the Levi’s Vintage Clothing program?

T: This archive not only preserves and builds our vintage collection; it also serves as inspiration and as a record for our design team. The LVC reproduces the fits, fabrics and details of a bygone era, and makes them available in our retail stores for the consumer. The detailing is incredibly accurate. The design team puts out two ‘vintage’ collections a year, and when I get an important acquisition for the archive, I always make sure to share it with the designers. It’s very exciting to see our history reproduced in these garments, and made available to the Levi’s connoisseur.

The Vault is open to the public at Levi’s Plaza at 1155 Battery Street, San Francisco, CA, USA