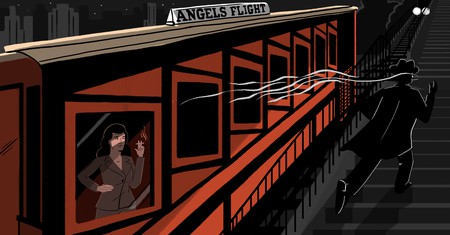 The former glory of Los Angeles’ Bunker Hill neighborhood, once a star of film noir, has been all but forgotten. But its history survives at Angels Flight Railway, the area’s last remaining downtown landmark.

In film, Angels Flight has been the site of first kisses, murders, escapes and identity crises, but the narrow-gauge funicular, which bills itself as the world’s shortest railway, is also one of the few remaining ghosts of the lost neighborhood of Bunker Hill.

Initially built by Colonel James Ward Eddy in 1901, Angels Flight shuttled passengers the 298 feet (91 meters) between downtown Los Angeles and Bunker Hill. Until the equally iconic 2nd Street Tunnel was finished in 1924, Angels Flight was the most direct path to and from the residential hamlet.

At the turn of the 20th century, Bunker Hill was populated by LA’s early elite. Their homes, called Queen Anne or Gingerbread mansions, were known for Easter-egg colors and elaborate ornamentation. Angels Flight was an extension of the signature aesthetic; the station has intricate detailing and a distinct color palette of orange with black trimming.

The incline railway transported Angelenos to another realm of the City of Angels as it shuttled them uphill in one of its two railcars, named Olivet and Sinai. But by the 1920s Bunker Hill’s sheen began to fade. Residents moved out of the area to more desirable locales like the hills of suburban Pasadena and the beaches of the Westside.

It is hard to ascertain exactly why residents decided to leave but history professor Elsa Devienne of Paris Nanterre University, who studies the development of LA’s Westside, offers a few theories: “I would venture that this was due to the general loss of attractivity of the downtown area in the late 1920s-1930s, which was plagued by congestion, and the emergence of new business and retail centers in other parts of the city, including the Wilshire Boulevard area [on LA’s Westside], which was easier to access for shoppers with automobiles.”

The mansions were bought by landlords who rented rooms to city workers, most of them single men. As a result, the area that had been one of the most fashionable neighbourhoods of Los Angeles in the 1880s was identified as an area of “blight” by the 1930s.

“What is really important about the definition of blight is that it actually referred to the racial diversity of the community,” says historian Anne Gray Fischer of Indiana University, Bloomington. “Official documents on Bunker Hill noted that ‘subversive racial elements predominate,’ as proof of the area’s blightedness.”

What was seen as a blight to city developers was the perfect inspiration for novelists – among them John Fante and Charles Bukowski – and screenwriters looking to capture the darkness lurking beneath the perpetual sunshine. The Hill, once perched like a jeweled crown atop downtown, had fallen into disrepair. Colors faded and rooms rented out at the cheapest rates, its mansions became a fitting metaphor for fleeting youth, unfulfilled promise and the corruption of greed. Angels Flight was the gateway to this vague memory of Bunker Hill’s more prosperous past.

An ideal shooting location because of its stark imagery, Bunker Hill – and Angels Flight by extension – became a fixture of film noir by the 1940s. Characterised by gritty characters and crime-ridden plot lines, the noir genre also furthered the negative perception of urban communities, as explained in Mike Davis’s book City of Quartz (1990). According to Davis, the noir genre created a “dystopianization of Los Angeles,” perpetuating social fears about the dangers of urban life well into the 1960s when residential Bunker Hill was officially dissolved.

Evidence of this fear can be seen in the film Angel’s Flight (1965), in which Liz, a white woman who grew up in Bunker Hill, is transformed into an unapologetic exotic dancer and serial killer after a date attacks her on the stairs of the funicular. Her attacker, represented only in artistic renderings, is “the only figure that seems recognisably racialised,” says Fischer.

According to Fischer, who researches race and sexual policing between the fall of Prohibition in the 1930s and the 1980s, Liz represents the “angel of white womanhood,” morally corrupted by the sexual nature of her attack and her willingness to date a person of color in the first place. Wariness of urban centers became directly linked to the idea that women and children needed protection from moral corruption found in cities. Liz is neither good nor bad, rather, as Fischer explains, “the tension of whether she is an angel or a criminal is very representative of prevailing white-male anxieties about the dangers of city life.”

Areas of blight, like Bunker Hill, were used in pop culture to represent the moral danger communities of color posed to American society, as Eric Avila explains in his book Popular Culture in the Age of White Flight (2004). Urban redevelopment projects that aimed to remove blighted areas disproportionately focused on communities of color, which became a point of tension during the Civil Rights Movement of the 1960s and 1970s.

Over the course of a decade, Los Angeles’ Community Redevelopment Agency oversaw the demolition of Bunker Hill. By 1969, the old neighborhood was replaced with construction sites for the high-rises and corporate plazas that define the area today.

“Bunker Hill residents were relocated and many probably lost their sense of belonging and community, as was the case in many instances of urban renewal,” says Devienne, “By demolishing Bunker Hill, the municipality and their allies in the business sector destroyed a vibrant residential neighborhood, which included cafés, restaurants, drugstores.”

Today, a few of the Gingerbread mansions still stand, refurbished and on display at Heritage Square in Montecito Heights, four miles (six kilometers) away from where they once decorated a hill that has since been leveled.

After nearly three decades in storage, Angels Flight was reopened a half-block away from its original location in 1996. The historic landmark sits across the street from the foodie heaven Grand Central Market and was added to the National Register of Historic Places in 2000.

Over the years, railcar derailments have led to multiple extended closures of Angels Flight, but thanks to new safety features, action from preservation societies and a petition directed at Mayor Eric Garcetti from the Angels Flight Friends and Neighbors Society, it is currently in operation. For one dollar a ‘flight’ – 50 cents if you use a Metro TAP card –you can briefly experience a part of everyday life in long-lost historic Bunker Hill.