The sparsely populated stretch of land known as the Big Sur has inspired the likes of Henry Miller and Jack Kerouac, new-age 1960s philosophers, and adventurers looking for the freedom of the open road. The Californian road trip is as much a cultural trope as it is an experience, but the stop-offs along the way are enough to satisfy any traveler. We take a tour through Big Sur’s cultural offerings.

The boundaries of the Big Sur are vague at best, and lying just before the main beaten track, in the direction up the coast from Los Angeles to San Francisco, is Morro Bay, marking the beginning of the inspiring landscape that flanks both sides of the road. The small seaside town is most striking for ‘the Rock’ – a towering volcanic plug that juts out of the ocean on the horizon – and the diverse wildlife that can be spotted from the beaches, including sea otters, elephant seals and majestic whales. Gladys Walton, the iconic silent movie star of the 1920s, made a home for herself in the village, naming it ‘Glad’s Castle’ and welcoming guests into her eclectically designed house. Morro Bay’s Art Center hosts a regular ‘Art in the Park’ festival, showcasing local talent and capturing the small-town community culture that can only be found in such places.

Just over half an hour’s drive up the coast is the deservedly popular stop at Hearst Castle; built between 1919 and 1947, the landmark is rather more modern than the ancient castles of Europe, but magnificent nonetheless. The estate, lying at the midway point between Los Angeles and San Francisco, was developed by and for the influential newspaper owner William Randolph Hearst, and the mansion at its heart was designed by architect Julia Morgan in Spanish Revival style, complete with a neo-hellenistic Neptune pool and a Gothic-arched library. Perched high atop a hill above the San Simeon national park, the grounds welcome many visitors who flock to see the roaming exotic animals in the private zoo, the grandiose bedrooms, and the gaudy fusion of old-world art and artefacts with American consumerist culture, best epitomised by the European antique dining table, often set with Heinz ketchup at formal occasions. 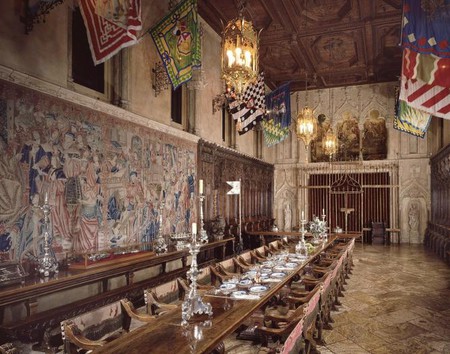 The New Camaldoli Hermitage, a monastery nestled in the hills, offers bookable silent retreats for those seeking ‘the sanctity of Jesus Christ through the heritage of Saint Benedict’. For an alternative scene, head instead to the Esalen Institute, on the site of what was once the home of the Native American Esselen tribe. The institute was established as the educational and spiritual centre for the Human Potential movement of the 1960s, and has since played host to the Big Sur Folk Festival in its sprawling grounds. The institute also provided a young Hunter S. Thompson with a much-needed job as a security guard, before he went on to write the counter-cultural journalism that earned him the status he enjoyed as a popular cultural figure. Even deeper into the mountains lies the isolated Tassajara Zen Meditation Center, the oldest Japanese monastery in the United States, promoting Buddhist teachings and practices for those seeking to restore their balance and journey into acceptance. 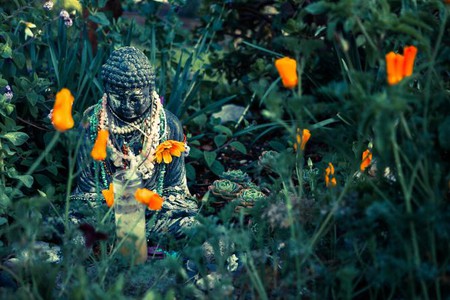 The literary legacy of the Big Sur is enduringly represented at the next stop – the Henry Miller Memorial Library. Henry Miller lived just up the road for almost 20 years, and wrote Big Sur and the Oranges of Hieronymus Bosch as an ode to his haven. The reference library that now bears his name is less a library and more an eclectic bookshop, housed in the wooden cabin that was once home to Miller’s great friend Emil White. This Big Sur literary destination celebrates the prolific work of one of America’s most controversial writers, whose work was as divisive for its provocative themes as it was celebrated. The library and its peaceful gardens brim with travellers browsing the collections all through the day, in the bohemian atmosphere that has been carefully preserved, delighting visitors with the illusion of having stepped back 50 years. 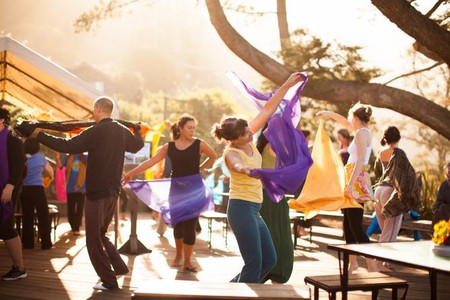 Just minutes up the road, the traveller will come upon the Spirit Garden, a centre dedicated to international art, music and multicultural education. The gardens are adorned with exotic sculptures at every turn, and populated with human-sized ‘bird nests’ — indulgently comforting twig seats filled with soft pillows — in which visitors curl up to watch live performances and concerts in the grounds. The complex contains a gallery of contemporary art and sculpture from around the world, including intricate mosaic art, African sculptures, Haitian painted art, and photographic prints thematically representing life and culture of the Big Sur.

Supplementing the vibrant art scene are the restaurants and cafes famed for their gastronomical treats and for the introverted writers and cultural figures who once graced their tables. Visitors still gravitate en masse towards Nepenthe bar and restaurant, just as some of the greats of the beat generation had done years before. A well-circulated tale describes one of Kerouac’s infamous drinking binges at Nepenthe, where he inadvertently spent an entire night whilst Henry Miller sat at home, expecting his company well into the late hours. The redwood building set on the cliff, its balcony bathed in sunshine that shifts through pastel colours as sun sets, was once Miller’s home, though it changed celebrity hands a number of times, originally gifted from Orson Welles to actress Rita Hayworth.

Another favourite eatery is the Big Sur Bakery, where the pace is leisurely, the decor rustic, and the food celebrated. Here travellers can enjoy a baked scone for afternoon tea or choose a light meal off the menu that includes wood-fired pizzas, warm salads, and a range of roasts and grilled meat and fish. For upscale dining, the Sierra Mar restaurant at the exclusive Post Ranch Inn, overlooking the coastline from its stunning cliff-edge location, offers a choice between a four course and nine course set menu, comprised of innovative combinations and regional specialities from Chef John Cox.

Where to Stay in Big Sur

Although the Big Sur can be completed in just a few hours, the overnight options are teeming with history and culture, such as Deetjen’s Big Sur Inn, the collection of cabins in the forest set up by the Norweigan immigrant and Big Sur personality who would come to be known as ‘Grandpa Deetjen’. Each cabin is a unique miss-match of design and furniture, impressing on visitors the quirky charm that has delighted bohemian guests for almost 80 years, earning the inn recognition on the National Register of Historic Places. For those seeking an environmental experience of a different kind, the retro, 1960s-chic motel, Glen Oaks, is built with natural walls, and uses only recycled and renewable stone, Peroba wood, bamboo, resin, wool carpets and organic cotton to create a luxurious and sustainable natural environment. 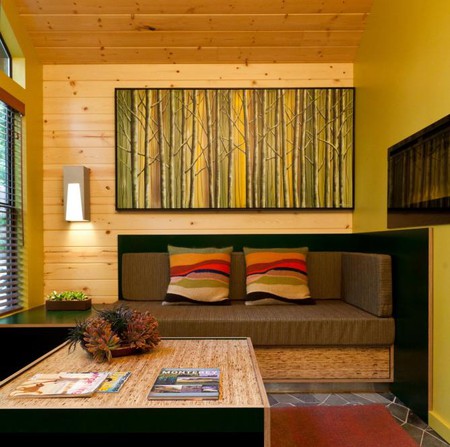 After a well-rested night, travellers drive on towards Carmel-on-Sea, through the Point Sur State Historic Park, where the lighthouse built in 1889 is still playing an active role on the coastline, also serving as an educational visitors’ centre. Before approaching Carmel, all must cross the iconic Bixby Creek Bridge, which has also become an aesthetic of the Big Sur in its own right. The reinforced concrete arches constitute one of the tallest single-span concrete bridges in the world, and the bridge has featured as a recognisable landmark in many publicity campaigns, television shows and even songs. The bridge, or rather, the canyon and beach beneath, is also a site of pilgrimage for those searching for signs of Jack Kerouac’s Big Sur, since it is Bixby Creek that hosted Kerouac in poet Lawrence Ferlinghetti’s isolated cabin, and here that he meditated on the ragged coastline that inspired his poem ‘Sea’. Pilgrims rarely make it down to coast, since the ill-advised walk is precarious at best and impossible at worst.

Over the bridge, and onto the final stretch of the drive, which crosses the Big Sur boundary and culminates at Carmel-by-the-Sea – a vibrant village that has historically thrived off its strategic location. In addition to a pretty beach and a number of quaint inns and cafes, the village has two important historical and cultural landmarks: Mission San Carlos Borromeo de Carmelo, considered to be the finest example of Spanish colonial period design in all of California, and Tor House and Hawk Tower, built by 20th-century poet Robinson Jeffers as a gift to his wife. The stone house and tower evoke romantic and nostalgic sentiments all who visit, whether or not they have come to pay homage to the great bard of the Californian coastline.

Originally an artists’ colony, Carmel–by-the-Sea still hosts a disproportionate number of art galleries, ranging from the Carmel Art Association, with a long legacy of showcasing local artwork, to the more contemporary Gallery EXPOSED, exhibiting a full range of photography from different genres.

Leaving Carmel, and the Big Sur behind you, the cultural tour is by no means complete.

John Steinbeck’s Salinas is less than an hour’s drive ahead, and further up the coast San Francisco’s influential Beat legacy remains to be discovered.