It’s no secret that California is home to some of the USA’s most beautiful coastline, from its urban areas to the rugged northern reaches of the state. Here are some of the state’s best coastal bike routes, from Los Angeles’s beach communities to northern California’s rugged redwoods. 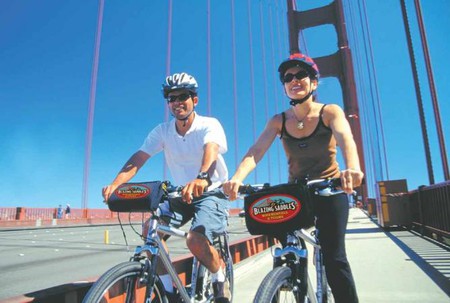 Bike rental company Blazing Saddles offers a number of tours in and around San Francisco, but its most popular is the Bike the Bridge route through the charming bay side towns of Sausalito and Tiburon. Starting at Fisherman’s Wharf, the route takes cyclists through scenic Presidio National Park and across San Francisco’s most iconic landmark, the Golden Gate Bridge, offering panoramic views of the Bay Area. From there, the route winds down to lovely Sausalito and to historic Old Mill Park before ending in the picturesque fishing village of Tiburon. Hardy cyclists can trace the route back to its starting point or, for a more relaxing alternative, hop on the ferry from Sausalito or Tiburon back into the city. 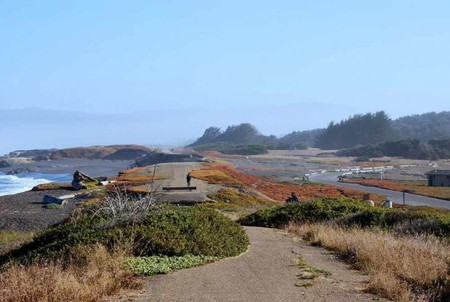 An old haul road, formerly used to transport lumber into Fort Bragg, offers a scenic, three-mile route through Mendocino County’s beautiful MacKerricher State Park. Beginning just north of downtown Fort Bragg, the haul road takes cyclists over Pudding Creek Trestle – a historic rail bridge dating back to 1916 – traveling northwards via beautiful coastal bluffs to Laguna Point, a prime spot for whale-watching and seal-spotting where cyclists can take a quick detour before continuing on their journey. North of Laguna Point, the haul road travels past the beautiful Lake Cleone, a tidal lagoon home to more than 90 species of bird, before the accessible trail ends at the Inglenook Fen-Ten Mile Dunes Natural Reserve.

Voted ‘Best Bike Trail’ in the Eureka Times-Standard’s Best of the North Coast Awards, the Hammond Trail is a picturesque route traversing some five miles between the Mad River and Clam Beach in Humboldt County. Cyclists start their journey crossing a steel truss bridge offering gorgeous views of the Mad River, passing along the western edge of the town of McKinleyville and scenic Hiller Park. Continuing north, Hammond Trail features spectacular views of the Pacific Ocean before coming to its endpoint at the sandy stretches of Clam Beach County Park, popular with surfers, campers, and picnickers. 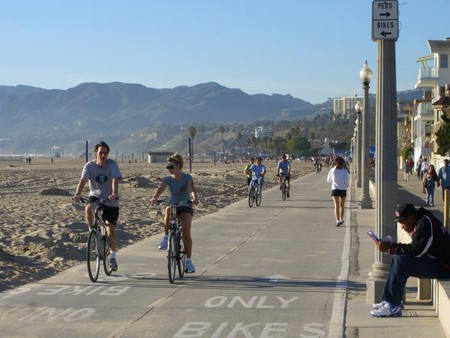 The Marvin Braude Bike Trail runs just over 20 miles alongside the Pacific Ocean, between Will Rogers State Beach and the city of Torrance in Los Angeles. Starting at its most northerly point in Pacific Palisades, the trail takes cyclists along the shoreline via some of Los Angeles’s best-loved beach towns, including laid back Santa Monica and quirky Venice Beach. At Marina del Rey, the route loops around the seaside community’s scenic harbor before emerging back onto the shore and traveling southward to its terminus at Miramar Park in Torrance, a couple of miles south of Redondo Beach Pier. 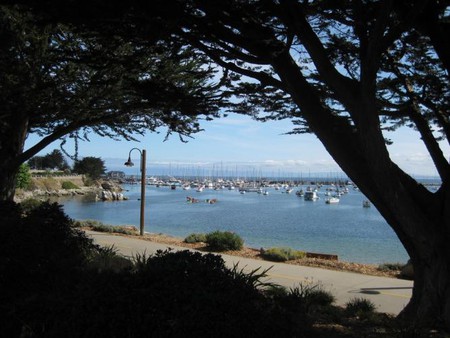 The trail at Monterey | © sarspri/Flickr

Undoubtedly one of the best ways to experience the pretty seaside community of Monterey and its surrounding areas, the Monterey Bay Coastal Recreation Trail meanders along the coastline between Castroville in the north and Pacific Grove in the south. Along the 29-mile trail, which follows the route of the old Southern Pacific Railway, cyclists are treated to some of northern Monterey County’s best spots, including the beautiful Fort Ord Dunes State Park, the scenic rocky promontory at Lovers Point Park, and historic Cannery Row, immortalized in John Steinbeck’s classic novel of the same name. 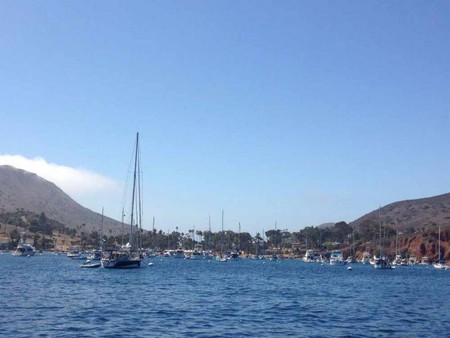 Located 22 miles off the coast of Los Angeles, Santa Catalina Island is a peaceful haven away from the hustle and bustle of its busy neighbor. The island’s forty miles of biking trails traverse the island from tip to tip via Santa Catalina’s rugged interior and are perfect for more experienced mountain bikers; a slightly less taxing route along its northwestern coast is great for the more casual cyclist. Starting out at the tiny town of Two Harbors, the route hugs Santa Catalina’s coastline, passing beautiful bays and scenic coves before ending at the secluded, rugged beach at Parsons Landing. 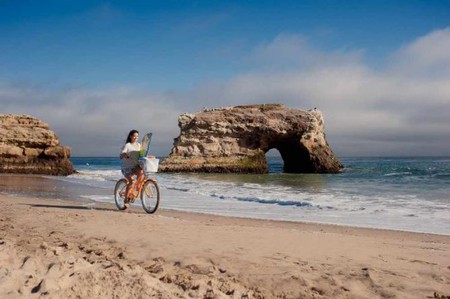 A gentle, ambling route through Santa Cruz’s coastline, West Cliff Drive is an ideal trail for less experienced cyclists, and at just three miles long, it can easily be made into a round trip. From the city’s lively Municipal Wharf, West Cliff Drive takes cyclists past surfing hot spot Steamer Lane and the neighboring Santa Cruz Surfing Museum at Lighthouse Point – a perfect spot for a mid-route break and for indulging in some whale- and dolphin-watching. From there the route travels alongside the coast, ending at the beautiful Natural Bridges State Beach, a state-designated preserve home to wintering monarch butterflies. 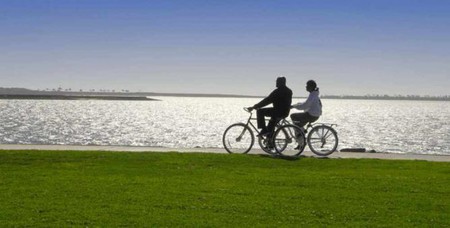 A circular route around San Diego Bay, the Bayshore Bikeway is one of the southern California city’s most iconic bike paths and a must-try way of seeing the sights. Starting at the Coronado Ferry Landing, the 24-mile-long Bayshore Bikeway passes along the narrow, sandy stretches of Silver Strand State Beach to Imperial Beach. Next on the map is Chula Vista, home to the Living Coast Discovery Center and some of the best Mexican food north of the border, before the trail leads cyclists into bustling downtown San Diego. 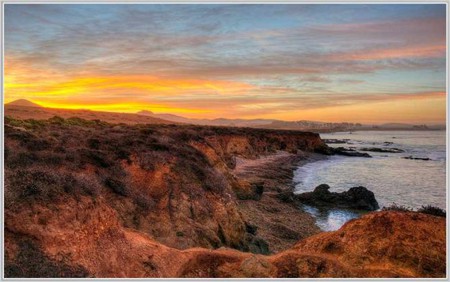 The coast near San Simeon | © tdlucas5000/Flickr

A beautiful journey along 20-plus miles of San Luis Obispo County’s coastline, this route – recommended by the San Luis Obispo Bicycle Club – follows the Cabrillo Highway between Cambria in the south and Ragged Point in the north. From Moonstone Beach Park, cyclists ride past the scenic coastline at Hearst San Simeon State Park before coming to the town of San Simeon where the nearby Hearst Castle offers a beautiful detour. Northward, Piedras Blancas offers elephant seal–spotting opportunities and rugged coastal views before the route comes to an end at the rustic Ragged Point Inn, where a wine bar awaits for a refreshing post-ride treat. 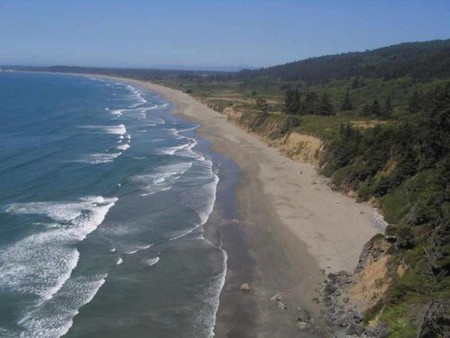 Part of the epic California Coastal Trail, a 1,200-mile route along the entire length of the state, the Last Chance Section takes mountain bikers through the westernmost reaches of Del Norte Coast Redwoods State Park. From Crescent Beach Overlook at the northern end of the route, the Last Chance Section sends bikers southward on a high adrenaline ride past towering redwoods and rocky, rugged coastline. Route highlights include the rocky and remote stretch of sand known as Enderts Beach and beautiful wildflowers at the trail’s terminus near Damnation Creek Trail.