British Artist Danny Fox: Los Angeles ‘Has Changed the Colors I Use’ 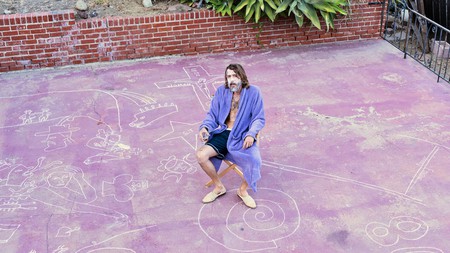 Most people’s journeys toward the City of Angels involve a search for glitz, glamour, fame, fortune and all those skin-crawling words so often chased and so rarely caught in Los Angeles. Danny Fox, on the other hand, wanted a place to paint; he found Skid Row, took it for all its grime and grit and allowed it to bleed into his work. The rest, for him, was history.

It was art that took Danny Fox to Los Angeles. The British painter arrived in the Californian metropolis on New Year’s Day 2016 to track down an artistic inspiration. “I came,” he says, “in search of the painter Henry Taylor, and I stayed because he opened his door to me.” 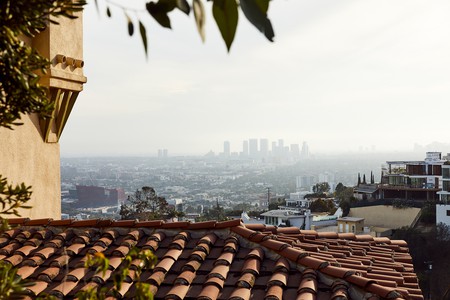 Fox is no stranger to drastic changes of scene. He was born in Cornwall in 1986 and grew up in St Ives, a small, seaside town whose light-capturing bays have attracted a surprising surfeit of artists from Barbara Hepworth to Bernard Leach. After several years spent working low-paid dishwashing jobs around the region, he moved to the capital in 2004, where he spent a period of instability living in South London’s infamous, now demolished St Agnes Place squats. He eventually found work in the antiques trade and traveled around the country. Once Fox was able to devote himself to painting, his star steadily rose. 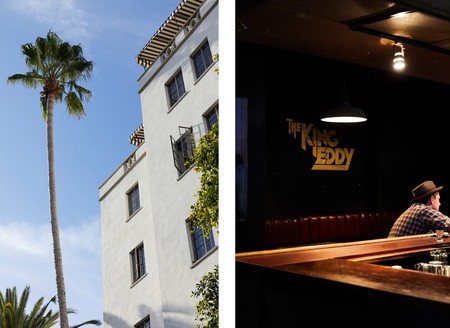 Fox now lives and works in Skid Row, an area of Downtown LA long synonymous with urban decay. It hosts one of America’s largest homeless populations, whose tents line the area’s low-rise, post-industrial streets. Also known as The Nickel, it has continued to resist the gentrification that has transformed adjacent localities like the Art and Fashion Districts. “I like it,” says Fox, “because it is harsh, lawless, real, unpredictable – and somehow beautiful.” 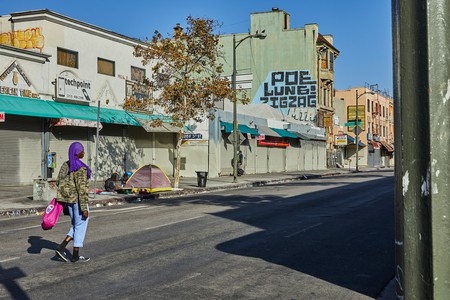 Skid Row, in its desolation and desperation, serves as a point of inspiration for Danny Fox | © Ryan Young / Culture Trip

These extremes have seeped into his work, which often takes the form of large, thickly painted canvases with bold figures and a flattened perspective. The paintings sometimes seem to flit between Fox’s observation of life and a heightened realm of recurring symbolic motifs such as flowers, palm trees and empty cans of beer. A self-taught artist, Fox learned to paint by devouring books, and his canvases often allude to the history of art, whether through genres like the equestrian portrait or referential echoes in specific figures or objects. His catalogue A Cut Above the Eye, which collects his work from 2011 to 2018, features contributions from Henry Taylor and Rose Wylie, both of whom might be described as kindred spirits in their instinctive approach to painting.

When it comes to viewing art in LA, Fox likes to start at the source. “I’m lucky enough to be friends with some of my favorite artists,” he says, “so I can just go to their studios to see new work.” He presently admires multimedia artist and curator Ariana Papademetropoulos, who “makes caves and whole ghost worlds you can climb into.” 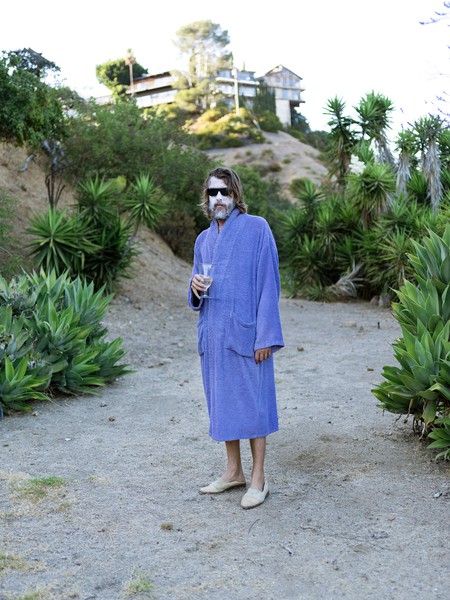 To encounter the old masters, Fox heads to Pasadena, northeast of LA proper. Here, the Norton Simon Museum hosts an 11,000-strong collection that boasts Asian artworks, numerous masterpieces from the history of European art and a hefty contemporary American selection. In nearby San Marino, he frequents The Huntington Library and Art Collections. “There are,” he explains, “tropical and Japanese gardens, and blue boy up in da club” – referring to The Blue Boy (c. 1770), a portrait by British artist Thomas Gainsborough, which in 1921 became the world’s most expensive painting when it sold for $640,000 (approximately $9 million in 2019 dollars). 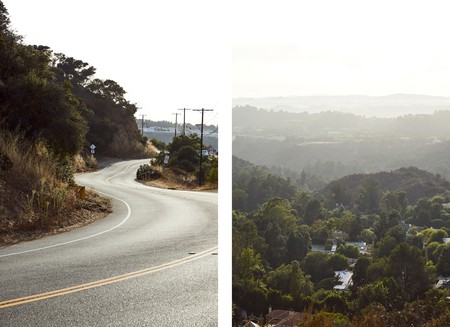 A low-density, polycentric grid that sprawls over 88 incorporated cities, Los Angeles is the paradigmatic metropolis of the automobile. For Fox, this humongous network of roads is one of the city’s great pleasures. “I don’t socialize much,” he says, “so to relax I just like to drive through the city in the evenings, maybe down Sunset Boulevard or up Mulholland Drive.” The former is a 22-mile (35-kilometer), multi-lane avenue that stretches from Downtown LA to the waterside Pacific Palisades, passing the famed hotel Chateau Marmont and the bars and billboards of the Sunset Strip, while the latter winds across the Santa Monica Mountains to Downtown’s northwest, providing panoramic views over the cityscape below. 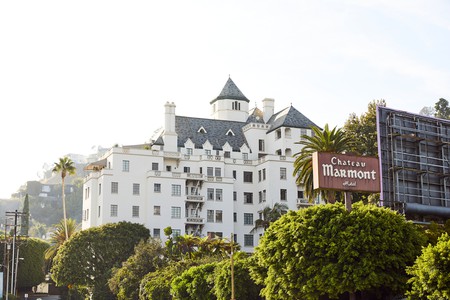 When he does go out for a drink, Fox favors The King Eddy, “the bar at the end of the street.” One of the oldest establishments in downtown LA, it began in 1906 as a hotel bar. During Prohibition it continued as a speakeasy beneath a piano shop, and later on it attracted proto-Beat writer John Fante and poet Charles Bukowski as patrons. Today, it retains the windowless interior, neon decorations and checkerboard floor of the no-frills Skid Row tavern. Fox’s preferred place to eat, meanwhile, is Sonoratown, which “does the best tacos downtown.” Named for a lost area of Downtown LA once home to northwestern Mexicans, it opened in 2016 and specializes in charcoal-grilled beef and handmade flour tortillas. 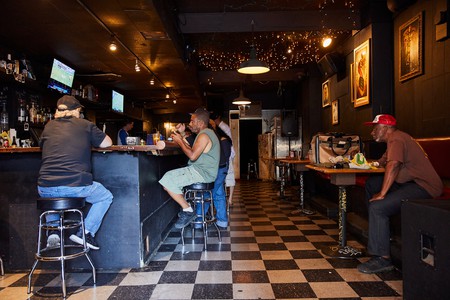 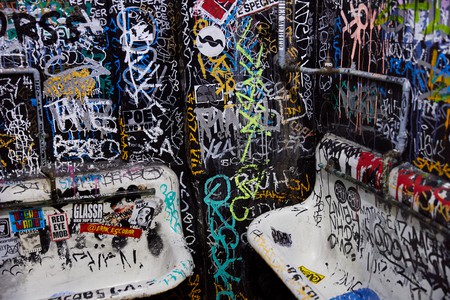 The move to California has proved transformative for Fox’s practice. “LA has changed everything about my work,” Fox explains, “but mostly the colors I use. Everything is bleached out and dusty but bright and joyful at the same time.” It has also seeped into his subject matter: an exhibition this summer at Copenhagen’s Eighteen Gallery saw him present a mixed-media tribute to America’s strip malls. 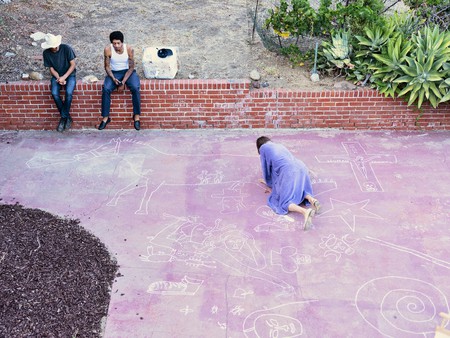 As he has become more acclimated to his new home, Fox has found his impressions of it change. “When I first moved here,” he recalls, “I said it felt like the first day of spring every day. But now I’ve been here for four years, it feels more like the last day of summer every day.” A place of brightness and joy, then, but one tinged with the expectation of melancholy.