San Francisco, city of many famed and golden-gated splendors, is also home to an urban wilderness of fruit ripe for the picking. Blackberries grow wild through dozens of parks, streets and local backyards. Take public transit to any of these popular four San Francisco attractions, and top it off with a small urban harvest of the City’s enduring natural bounty. 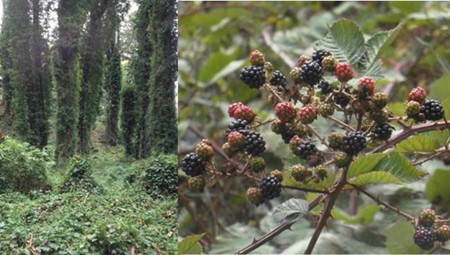 Mount Sutro Open Space Reserve is forever in the fog belt. Sixty-one acres of dense, glistening green nature call for a ramble through its damp paths and puddles. The mist envelopes and refreshes. Listen to the eucalyptus creak, the woodpecker echo, and step aside for mountain bikers.

As the fog condenses, it feeds the towering eucalyptus trees and drips down to nourish the English ivy and sprawling understory of non-native Himalayan blackberries. The flowers of the Himalayan blackberry have fatter white petals than the native Pacific type, and the green leaflets come in fives, not threes. They are flavorful and abundant, but do watch out for drop-offs. Many plants grow at the edges of ravines and cliffs.

There is an ongoing campaign to reduce fire danger in the forest and welcome back the area’s native biological diversity by removing a percentage of the imported trees and invasive understory. Before Adolph Sutro introduced the eucalyptus in 1886, this 900 foot hill was covered by sand and native grasses. The current redevelopment plan would give millions of long-dormant seeds another chance to flower in their native home. But songbirds and animals also love blackberries, and those seeds easily scatter from one place to another. Mowing, bulldozing and even burning wouldn’t necessarily control the hearty weed, which will inevitably re-sprout from fragmented roots and stems.

Getting There: View the trail map to locate any of several entry points into the forest. The closest MUNI stop is near the 17th and Stanyan Street entrance. Take the 37 Corbett, which will drop you off at 17th and Cole. From there, walk west on 17th for a couple of blocks until it dead-ends into Stanyan. The stairs that enter Sutro Forest are between two private homes, just a few steps south of the 17th and Stanyan intersection.

Disney and Dalí: Architects of the Imagination

Disney and Dalí: Architects of the Imagination is a new exhibit at the Disney Family Museum that explores the personal and professional relationship between Walt Disney and Salvador Dali. They were born thousands of miles apart, but led parallel lives as artists and visionaries. Both embraced emerging art forms and new technologies, expanded the possibilities of optical effects, and blurred the line between reality and dreams. On display are story sketches, conceptual artwork, original paintings, correspondences, archival film, photographs, and audio recordings.

The Spanish Surrealist felt the two had a “common destiny,” and in 1945 he and Disney began collaboration on an experimental film, Destino. Production notes and detailed drawings outline a bold and bizarre project in which the character of Chronos tries to “avoid the slavery of time, but it grips his legs and sticks his feet to thousands of watches.” Story and symbol fought for priority. Though Disney and Dali remained friends, their creative visions were irreconcilably different, and Destino was not finished in their lifetimes.

Getting there: Take the 43 or 28 bus through the Presidio and get off at Letterman and Lincoln. It’s a pleasant half mile walk down Lincoln to the museum at 104 Montgomery St. Ample scenic views of the Golden Gate Bridge appear as you get closer to the museum.

Getting back: On the walk back to the bus stop, pause at the grassy island at Letterman and Presidio for a few berries, then continue to the Letterman and Lincoln MUNI stop, where you can find many more blackberry bushes, right under the trees behind the bench.

Twin Peaks is at the top of a steep and winding residential neighborhood. Skip most of the 922 foot climb by riding MUNI’s 37 Corbett, a humming diesel electric hybrid bus, up to your stop at 74 Crestline Drive. Before hiking the last quarter mile by foot, take a look behind you to find a long, concrete staircase that cuts right back down through the houses. There may even be a blackberry branch or two peeking through as a clue to the riches below. After climbing one (or both) of the Twin Peaks above, plan to take that same staircase down to a small parking lot with many more berries in plain sight.

The path leading to the summits of both peaks is just across the street from the bus stop and is clearly marked. Wide wooden stairs cut into the side of the mountain and invite you to take big steps up to the top. The wind gets stronger the further you climb, until you are buffeted on all sides by the swirl and strength. The peaks are undeveloped mounds of sand and rocky gravel that offer a majestic view of the city all the way round. Visitors point out the sights in many languages. The new Bay Bridge expansion, the remains of Candlestick Park, the fog wafting through the Golden Gate Bridge, and everything down Market Street, from the rainbow flag to the Ferry Building.

Having taken a few photos, a good long look, and enjoyed that balance of being at once pushed and supported by the wind, follow that same trail back. Remember those signpost berries across the street? Let them lead you further down to a small parking lot with many more.

Getting back: From the blackberry parking lot, it’s another staircase down and a few steps to the return trip MUNI stop at Parkridge Drive and Burnett Avenue. The 37 Corbett will return you to Market Street and further connections. 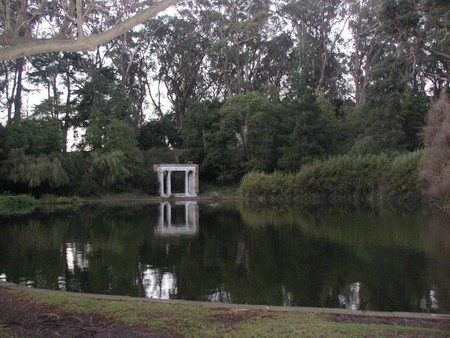 Portals of the Past on Lloyd Lake / | © Dennis Brumm

Portals Of The Past

Portals of the Past is an evocative moniker that entices for good reason. The marble portico once served as the doorway to the mansion of railroad tycoon Alban Towne. Before his home was destroyed by the 1906 earthquake and fire, these six white marble columns gleamed among the doomed Nob Hill estates of Crocker, Stanford and all the rest. In the wake of the disaster, this lonely ruin was immortalized by photographer Arnold Genthe as a symbol of the end of an era. Over the years, the Portals of the Past have come to serve as a reminder of perseverance through tragedy.

Moved from its original location on California Street in 1909, the picturesque portals are now located at Golden Gate Park’s Lloyd Lake, at JFK and Crossover Drive. Hitchcock put Kim Novak’s character in a trance while she gazed at the portals in Vertigo, but this tranquil lake setting, among ducks, shady trees, and a path to blackberries, is more likely to invite contemplation, peace and wedding planners.

Getting there: The shortest walk from MUNI drops you off at the north side of Golden Gate Park. Take the 5 Fulton to 22nd and Fulton. The path into the park is between 22nd and 21st, and it’s only a five minute walk to the lake, with blackberries along the way.

There is no city policy against picking a few berries on public land. Provided you know the risks and follow the recommendations, the benefits will be sweet. San Franciscans may claim to have their favorite “hidden” spots, but blackberries are not on the endangered list. Everyone from hikers to commuters can take their pick.