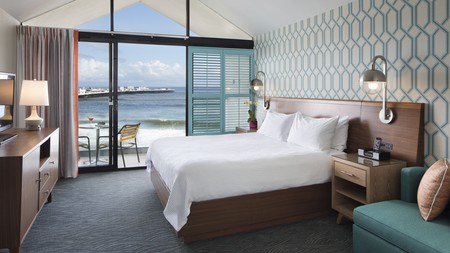 Santa Cruz is a great beach town at the top of Monterey Bay, with a boardwalk, wharf, amusements arcade and, of course, miles of golden sand. It’s fun to be self-sufficient on a holiday like this, and an apartment with a kitchen, and maybe even a private balcony or patio with ocean views, will be a welcome place to retire to after a long day at the beach. Here are the best rental apartments in Santa Cruz. 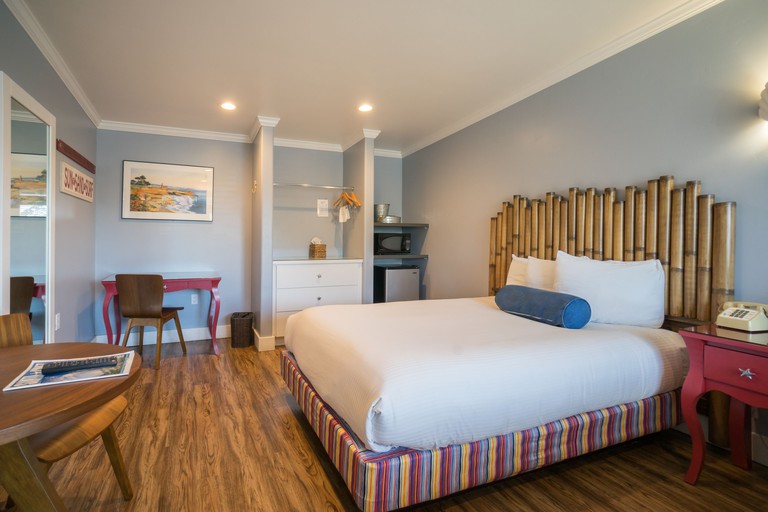 Courtesy of Beach Street Inn and Suites / Expedia
Once a 1940s motel, Beach Street Inn and Suites has since been transformed into a mini-resort. It overlooks Main Beach and Cowell Beach, two of Santa Cruz’s most popular, as well as the Santa Cruz Wharf, lined with shops and eateries. The rooms are bright and cheerful, with lots of ocean blues and nautical touches such as crossed oars on the walls. The ocean view balcony room has a kitchen, while the two-bed cabana suite opens out onto the pool deck, which includes a heated pool, firepit and hot tub. Guests can enjoy complimentary coffee, cocoa and espresso in the guest lounge.
Open In Google Maps
125 Beach Street, Santa Cruz, California, 95060, USA
+18314233031
Visit Website
Give us feedback

Casablanca on the Beach 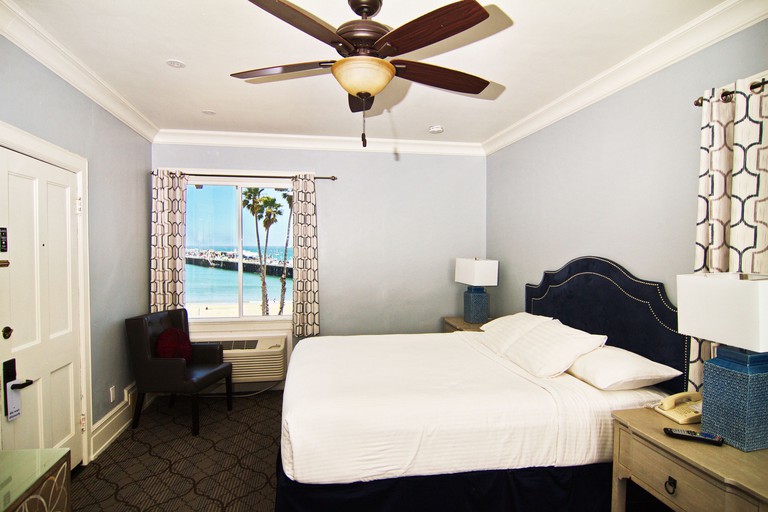 Courtesy of Casablanca on the Beach / Expedia
View Rooms
This converted mansion just a few paces from the Santa Cruz Beach Boardwalk has a Mediterranean vibe and great views across Monterey Bay. There’s beach volleyball and soccer right in front of you, and the wharf is a short stroll away. The rooms have coffee makers, organic bath products and either shared or private balconies overlooking Main Beach. Bowling at Boardwalk Bowl and all the amusements at Cocoanut Grove are a short walk away, including minigolf, laser tag and the casino arcade.
EVERYTHING YOU NEED TO KNOW 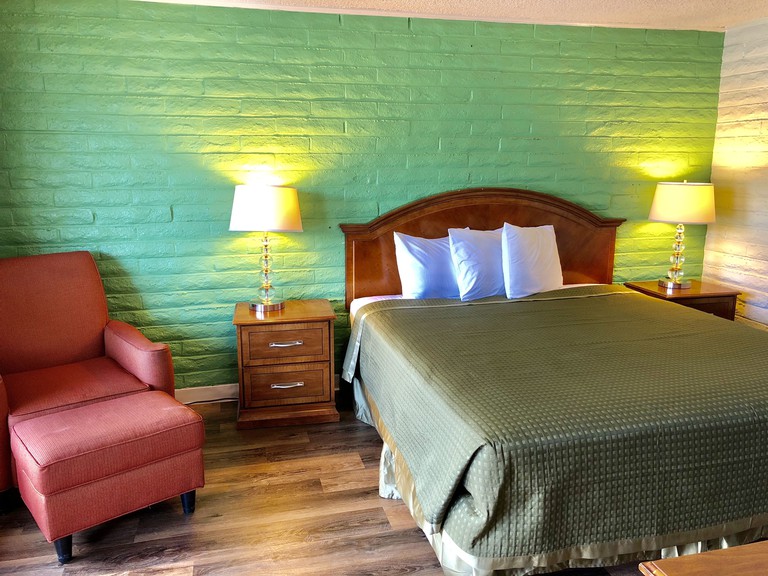 Courtesy of Hitching Post Studios Inn / Expedia
View Rooms
You’re in a tranquil spot a little away from the beach here, and the closest beach is a good one, Seabright, overlooked by the Santa Cruz Museum of Natural History. You should try walking to the beach through mellow Arana Gulch Open Space Park, past Woods Lagoon and Santa Cruz Small Craft Harbor. Some of the rooms at this cheerful motel feature a kitchenette, and all have complimentary coffee. If you’ve a hankering for Mexican food, family-owned Taqueria Agave is just across the street, serving Jalisco-inspired fare such as enchiladas with a choice of meat, rice, beans, cheese, sour cream, guacamole, lettuce and tomatoes.
EVERYTHING YOU NEED TO KNOW 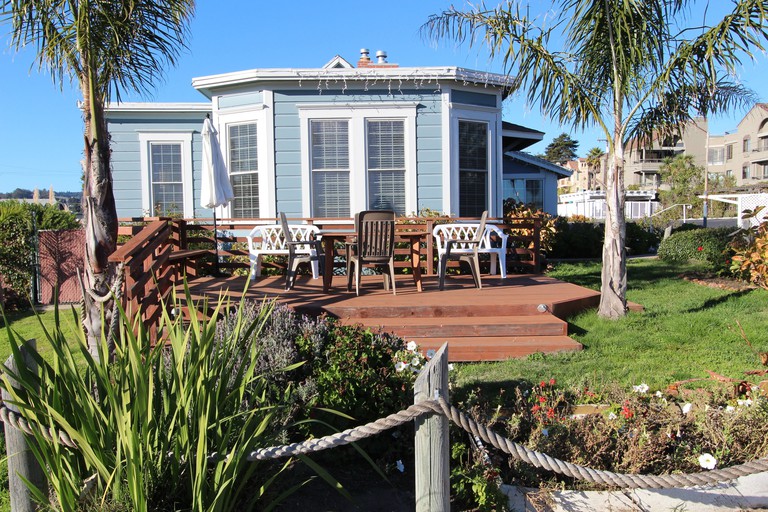 Courtesy of Edgewater Beach Inn and Suites / Expedia
View Rooms
Edgewater Beach Inn and Suites is set back a little from Main Beach, with great access to and overlooking Monterey Bay National Marine Sanctuary. All suites have kitchens and wood-beamed high ceilings; some boast jacuzzis and shared patios. There’s a swimming pool and an outdoor seating area where guests can barbecue. Lighthouse Field State Beach is a 20-minute walk along the coast and is fun to explore, along with Santa Cruz Surfing Museum, housed in the preserved lighthouse.
EVERYTHING YOU NEED TO KNOW 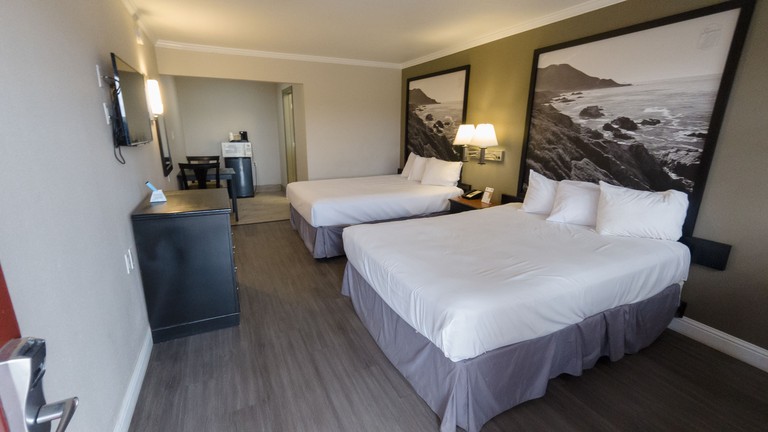 Courtesy of Super 8 by Wyndham Santa Cruz, Beach Boardwalk East / Expedia
View Rooms
This fun motel is just yards from the Santa Cruz Riverwalk, and a mellow stroll will take you down the San Lorenzo River to Main Beach and the boardwalk. If you don’t fancy the beach, there’s a pool, and the jacuzzi suite has a jetted tub. Cross the river and you’ll find scenic Riverside Gardens Park and Mike Fox Skate Park, with full bowls, pipe and rails. Jump on Ocean Street and you can be at the Mystery Spot in less than 15 minutes by car, a popular visual illusion tourist spot.
EVERYTHING YOU NEED TO KNOW 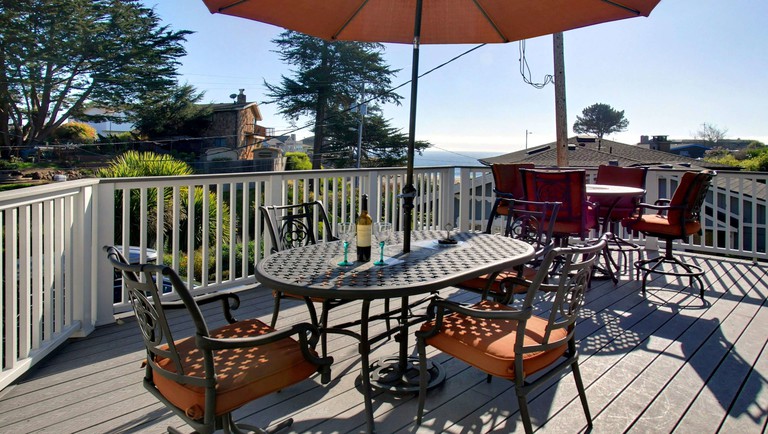 Courtesy of Ocean Echo Inn and Beach Cottages / Expedia
View Rooms
Sunny Cove Beach is mere steps from Ocean Echo Inn and Beach Cottages – and a beautiful patch of sand it is too, with a more intimate and relaxed vibe than the busier beaches to the west, closer to the centre of Santa Cruz. This boutique inn’s range of cottages sleep between two and six guests and all have kitchens, plus there are propane grills for your barbecuing pleasure and an ocean-view terrace to enjoy views across Monterey Bay. A complimentary light continental breakfast will set you up for the day.
EVERYTHING YOU NEED TO KNOW 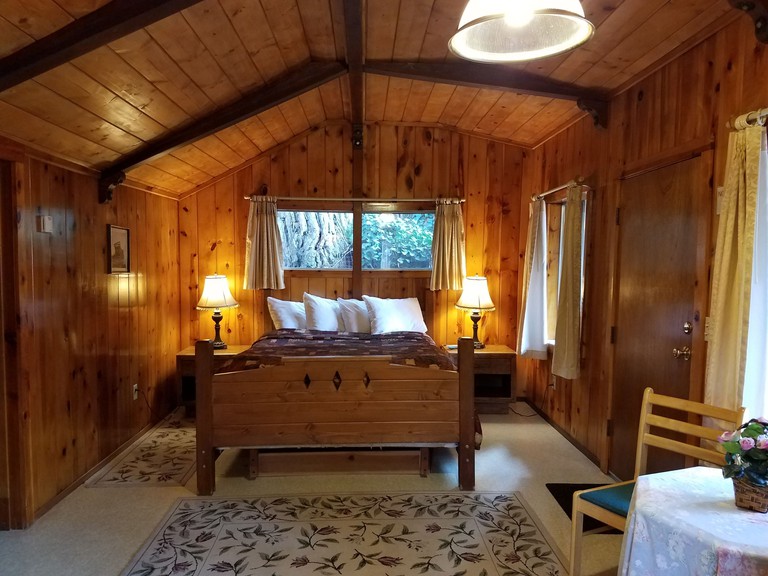 Courtesy of Fern River Resort / Expedia
Book Now
Follow the San Lorenzo River a few miles upstream from Santa Cruz and you’ll come to Fern River Resort, with its array of wood-panelled cabins amid the redwood trees. The majority have kitchens, so you can be self-sufficient, and all have a campground-style pedestal barbecue. There’s a private sandbank on the San Lorenzo River called River Beach for use by guests, with a mix of rocky and sandy areas. Swimming holes further down the river can be hiked to via Henry Cowell State Park. Other amenities include a campfire ring, badminton court, tetherball, ping-pong table, basketball hoop and horseshoe pit. There’s also an outdoor kitchen which can be booked for events.
Open In Google Maps
5250 Highway 9, Felton, California, 95018, USA
+18313354412
Visit Website
Give us feedback
Give us feedback