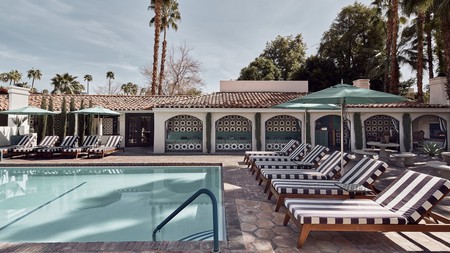 Palm Springs has its fair share of giant resorts. But there are also plenty of characterful boutique hotels offering a more personal experience. That means a pretty retreat built by a 1950s Hollywood actor, a hotel based on top of a natural spring and a pair of restored historic villas, surrounded by gardens budding with citrus blossoms, olive trees and bougainvillea bushes. We highlight the top boutique stays in Palm Springs, bookable on Culture Trip. 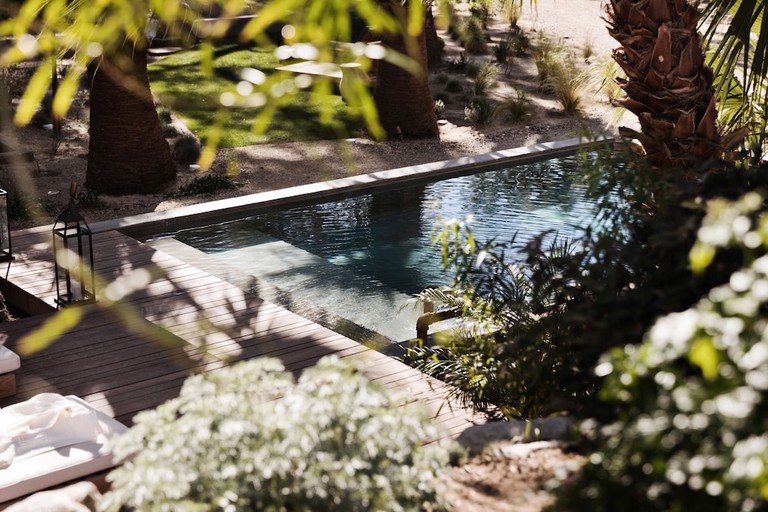 Courtesy of Two Bunch Palms Spa Resort / Expedia
View Rooms
On the other side of the Coachella Valley from Palm Springs, off Route 62 rather than 111, is this contemporary wellness escape, built in 1857 on the spot where a settler discovered natural springs. Soak in a sunken pool of the spring water, avail yourself of some spa treatments or chill in the grotto, lithium bath or a hammock slung between two palm trees. The hotel even has two Capone suites with private teak-and-concrete soaking tubs, named after rumored former owner and feared Chicago gangster, Al Capone.
More info 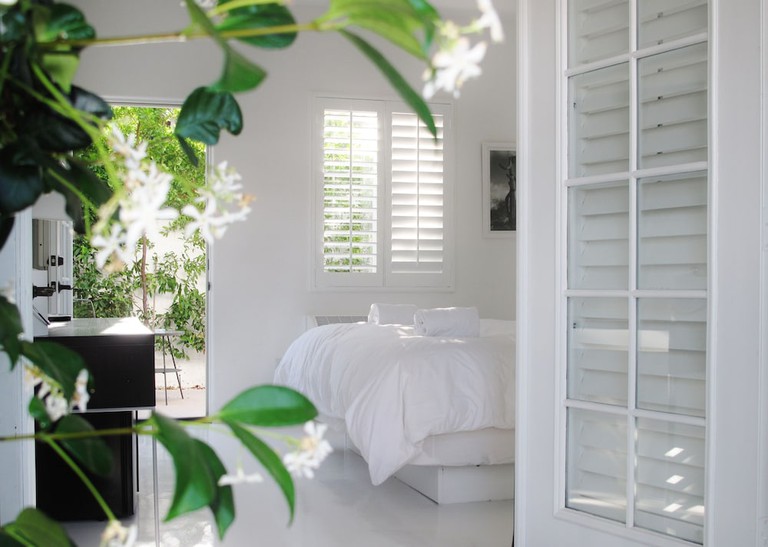 Courtesy of Alcazar Palm Springs / Expedia
View Rooms
Price Drop
Now from $174 per night
The whitewashed buildings of this 34-room boutique hotel really stand out against the blue of the Southern California sky in the retro Uptown Design District. The vibe is all modernist and minimal, with imported Italian linens, fireplaces and poolside patios. Attached is Cheeky’s, a popular breakfast and brunch destination known for its bacon flight – a selection of different kinds of bacon – and its potent bloody marys.
More info

The Avalon Hotel and Bungalows

Courtesy of Avalon Hotel and Bungalows Palm Springs / Expedia
View Rooms
Price Drop
Now from $319 per night
The Avalon has a sister hotel in Beverly Hills, and there’s plenty of Hollywood glamour to these manicured grounds, Spanish-style studios, private villas and cabanas arranged around three pools, all just one block from the Design District. Pool servers stand ready to supply food and drink by the water. Check out the Avalon Breakfast at Chi Chi restaurant: two eggs (your way), Nueske’s bacon, potatoes and rustic sourdough, washed down with a turmeric latte to get you going in the morning.
More info 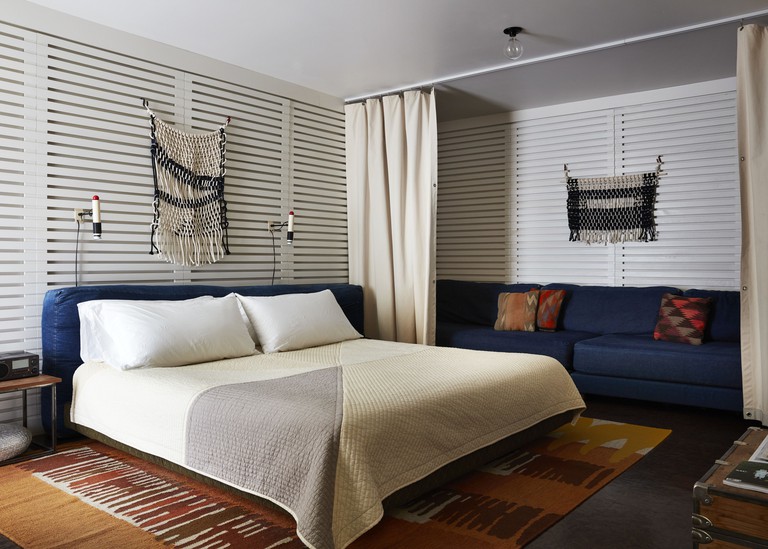 Courtesy of Ace Hotel and Swim Club / Expedia
View Rooms
This uber-cool desert hangout used to be a cheap motel with a Denny’s attached until it got an upmarket makeover. The vibe now is organic and bohemian, which means a vintage photo booth, record players and vinyl in some rooms (you can play the records and even take them home if you pay for them), caramel popcorn in the minibars and communal fireplaces throughout the hotel. There are also two big pools, a spa and the lively Amigo Room bar, with DJs, live music and bingo.
More info 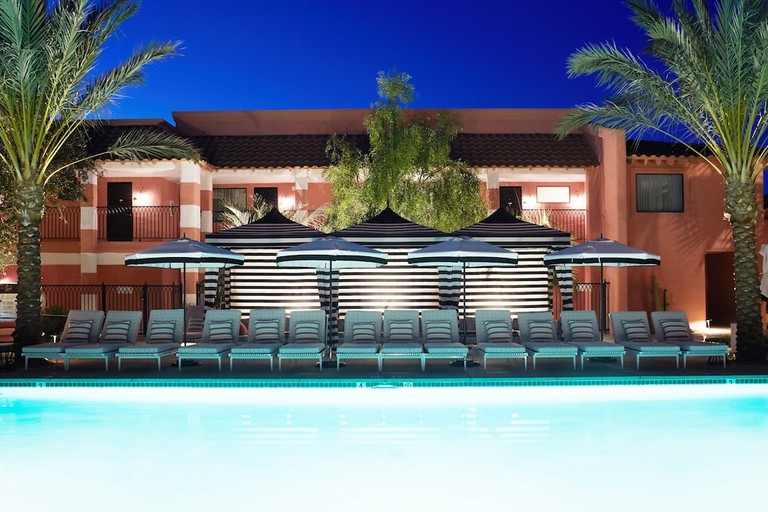 Courtesy of Sands Hotel and Spa / Expedia
View Rooms
Price Drop
Now from $213 per night
There’s a Moroccan feel to this designer adults-only hotel, spliced with classic mid-century Palm Springs. There’s a spa and the cucumber-cool Pink Cabana restaurant and bar, which is billed as a modern take on the great tennis and racquet clubs of the 1950s and ’60s in Palm Springs and styled by Brit designer Martyn Lawrence Bullard in baby pink shades with plenty of gold trim and an eye-drawing art wall.
More info 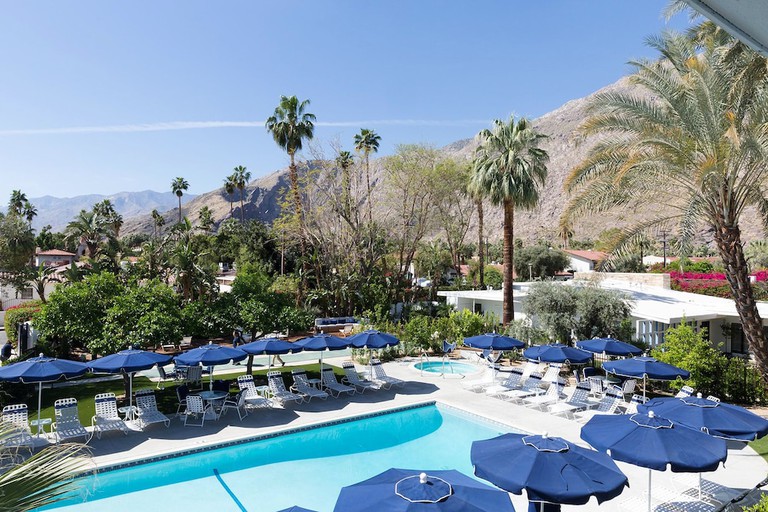 Courtesy of Holiday House Palm Springs / Expedia
View Rooms
Price Drop
Now from $250 per night
This downtown 28-room boutique hotel originally opened in 1951 and was designed by self-taught architect Herbert W. Burns, whose desert-modernist style has become synonymous with Palm Springs. There’s some lovely tilework throughout and art by David Hockney and Roy Lichtenstein. Guests must be over 21, and there are no televisions in the rooms “in order to create a communal environment.” The Pantry serves a unique take on classic Americana, all prepared with produce from across the Valley.
More info 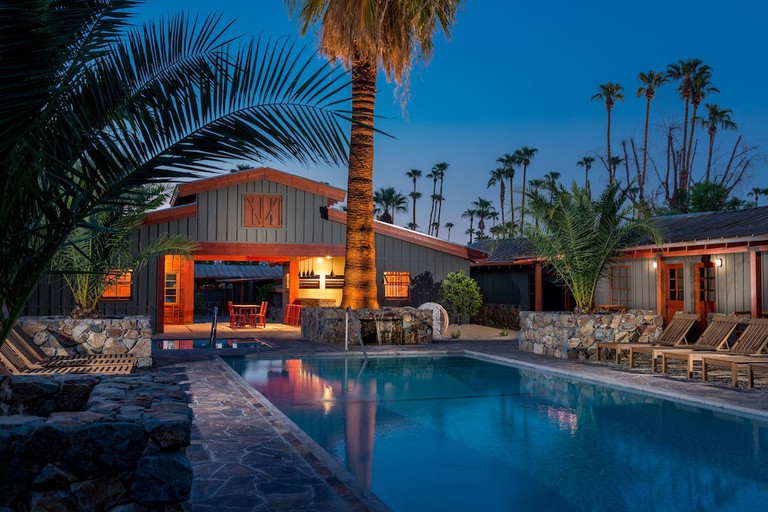 Courtesy of Sparrows Lodge / Expedia
View Rooms
Price Drop
Now from $284 per night
Originally built as Castle’s Red Barn in 1952 by MGM actor Don Castle along with his wife Zetta, this was a popular getaway for many a Hollywood type. The Lodge was restored in 2013, with many of the Red Barn’s original buildings still in use. The vibe is rustic and outdoorsy, with a communal barn, outdoor fire pit and vegetable garden. The 20 rooms have exposed beam ceilings, russet red walls, pebble-inlaid floors and butterfly chairs. There are rain showers in the bathrooms, and many include horse troughs as bathtubs. Most rooms have private patios, and there’s an open-air massage tent with two treatment areas.
More info 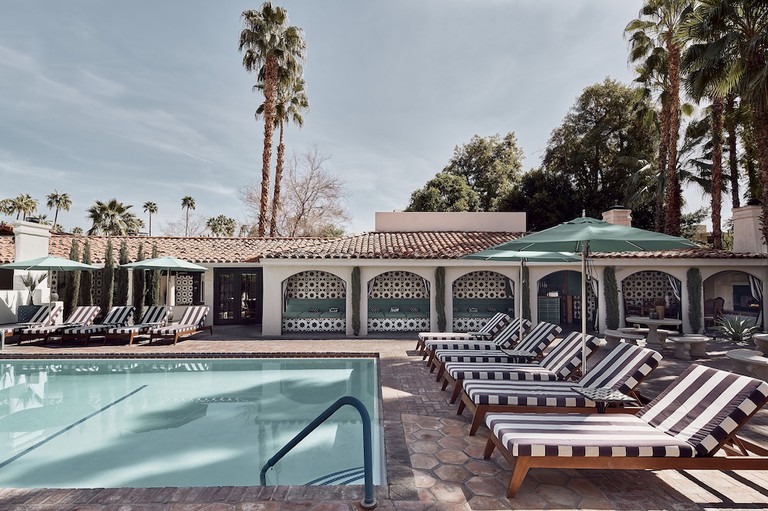 Courtesy of Villa Royale / Expedia
View Rooms
Price Drop
Now from $360 per night
Terracotta clay roofs studded with flowering local flora give a real desert charm to the villas at Villa Royale, which was built in 1947. There are vibrant murals on the walls of the grounds and a host of portraits both there and in the rooms, including of icons such as Lana Turner, Clark Gable and Debbie Harry, all painted by a trio of artists who lived and worked at Villa Royale for weeks at a time. Bar and restaurant Del Rey serves Mediterranean tapas-style food and cocktails.
More info 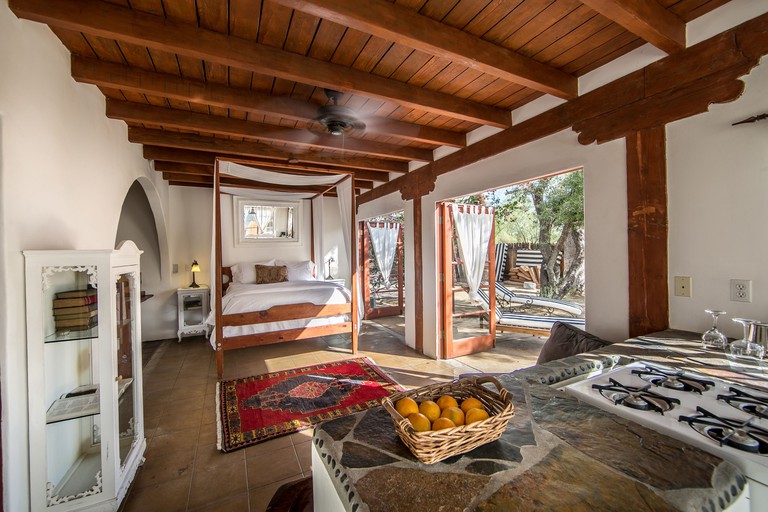 Courtesy of Korakia Pensione / Expedia
Book Now
Restored in 1989, Korakia is another boutique hotel with a Mediterranean-meets-Moroccan feel. It’s housed in two historic villas set in 1.5 acres (0.6ha) of gardens, including bungalows, guesthouses and pools. There are citrus blossoms, olive trees, date palms, bougainvillea bushes, Moroccan fountains and a stone waterfall spread across the main courtyard. One villa was originally owned by Scottish artist Gordon Coutts, who welcomed other artists, musicians and actors into his Moroccan hideaway, and the other was owned by silent-film star J. Carol Naish. There’s a library, where Coutts displayed his paintings, as well as massage, yoga, meditation, Moroccan tea and classic films projected on the wall as the sun sets.
Give us feedback