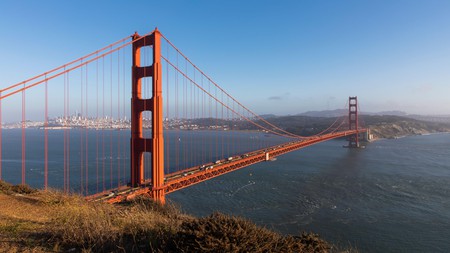 Seasoned cyclist or weekend cruiser – explore the real San Francisco on two wheels. Whether you prefer easy urban trails or leg-burning climbs, you can visit the most beloved spots in the city and take in unbeatable views with our cycling guide.

While San Francisco has a well-earned reputation for inclines, there’s so much more to cycling here than killer hills. Journey through historic neighborhoods, discover urban oases and cruise by landmarks. Keep yourself going by soaking up the eclectic San Franciscan energy that seeps from every street corner – the rewards are certainly worth it.

Sometimes the well-trodden paths really are the best. Think of San Francisco and you think of the Golden Gate Bridge, making this landmark a perfect starting point for cyclists of all abilities. The suspension bridge is an easy 2mi (3km) route with a dedicated cycle lane separated from vehicles, from which you can take in breathtaking ocean and mountain views across the bay.

The straight-shot cycle should only take around 20 minutes at an easy pace, but can be extended by following the route north to Sausalito, where you can look back on a picture-perfect city skyline. A word of caution: keep an eye on the weather. Rolling fog is common and, while it can make for an altogether magical experience, this route is best suited to sunny mornings when you can really appreciate the far-reaching vistas on all sides. 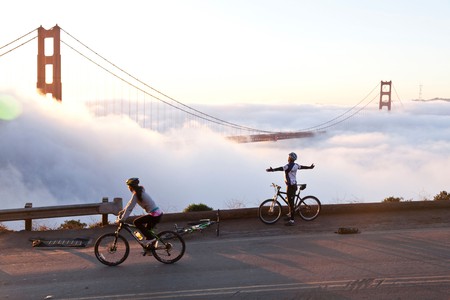 Ready to tackle one of the best-known hills in San Francisco? The Twin Peaks is a manageable intro, albeit one that’s a proper workout. Snaking north from the gloriously unspoilt Glen Canyon Park gorge all the way up to peaceful Ashbury Heights, this route transports you from the city bustle into a nature-lover’s haven. The 34 acres (14ha) of the Twin Peaks parkland is home to the beautiful Mission blue butterfly – an endangered species that has sought refuge in the undeveloped hills. Keep an eye out while exploring the clearly marked pathways.

The ascent doesn’t ease off until you reach Christmas Tree Point, so stop along the way and take in views over northern San Francisco. From here, it’s a welcome downhill cruise until you reach the residential Ashbury Heights neighborhood. If you’ve still got energy, take a short sprint around Buena Vista Park, a quiet spot often overlooked by tourists with distant views of the Golden Gate Bridge. 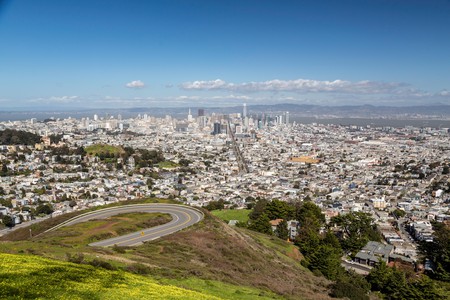 The Twin Peaks route is an intro-level climb, but one that will definitely feel like a workout | © AP Photography / Alamy Stock Photo

Although you can cycle around the Mission District in less than an hour, it’s worth spending as much time as you can soaking up the energy of this eclectic neighborhood. The colorful street murals here reflect the changing history of the city, where the politics and activism of old San Francisco collide with newer gentrification. Take advantage of the sunny microclimate created by the shelter of Twin Peaks to the west and start your route at the namesake landmark – Mission San Francisco de Asís (or Mission Dolores to the locals). This chapel dates to 1776, making it the oldest building still standing in the city. With impressive architecture, lush gardens and a historic cemetery, it’s a spot well worth exploring.

Cruise down Shotwell Street next, where craft breweries and new American restaurants rub shoulders with taquerias and community markets. Head over to Balmy Alley to get up close with the rich array of political street art in the area before circling back to the magnificent murals across The Women’s Building. Depicting historical women of importance, it’s one of the must-see attractions in the city. 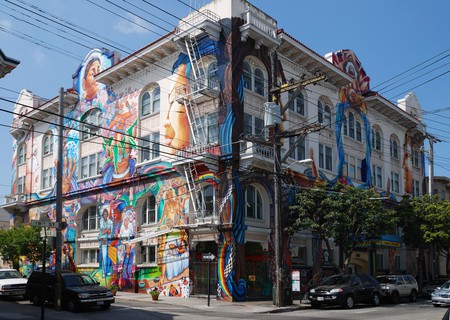 One of the most cycle-friendly stretches of coast in San Francisco, this 3mi (5km) long roadway delivers as many city landmarks as it does sublime bay views. Keep an eye out for the early-20th-century piers, once alive with commerce, from which the avenue derives its name (embarcadero is Spanish for pier).

Pedal from South Beach to Fisherman’s Wharf and you’ll pass Oracle Park, home of the San Francisco Giants. Slow down at the monuments to baseball titans, including Willie Mays and Juan Marichal. Continue past Rincon Park, and its stunning views across San Francisco Bay, and onto the Ferry Building, which opened in 1898 and is an emblem of the city’s economic growth. You’ll be hard pressed to find a gentler, more pleasing ride than this, especially if you combine cycling with good old-fashioned sight-seeing. 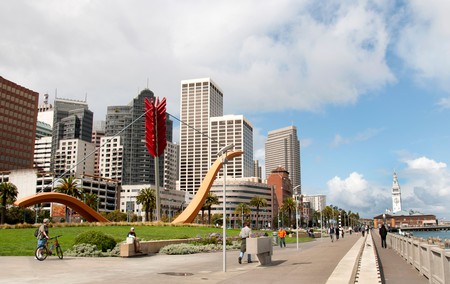 If flat roads are calling your name, try the Wiggle, a well-signposted 5.4mi (8.7km) route charting the most historic corners of the city, from Market Street to the edge of Golden Gate Park. Conveniently dodging the steepest hills, the Wiggle makes for an undemanding day of sightseeing, exploring both lesser-known and major spots in equal measure.

Start your journey heading west from Duboce Park, on the edge of the Mission District, along tree-lined residential boulevards and past cafes. Roll gently through the fashionable neighborhoods of Haight-Ashbury and the Panhandle, full to the brim with trendy bars and restaurants that mingle with brightly painted Queen Anne homes. Your final stop is the Golden Gate Park along with its pristine gardens, beautiful Conservatory of Flowers and fully functioning Murphy Windmill. 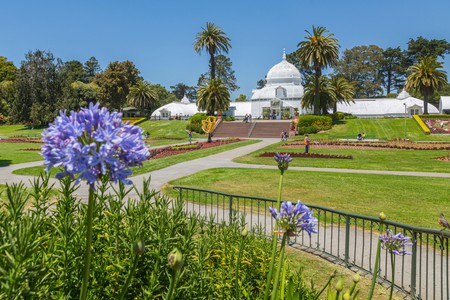 One for the sightseers, the Wiggle takes in the beautiful Conservatory of Flowers | © Frank Fell / robertharding / Alamy Stock Photo

Find out more and start planning your trip now by visiting sftravel.com