Andrea Fraser: Too Shocking for a US Retrospective 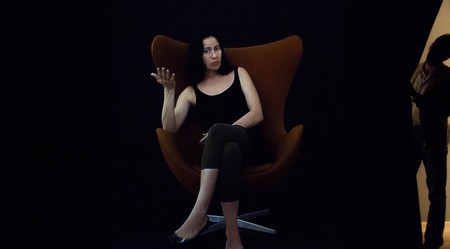 American performance artist and practitioner of institutional critique Andrea Fraser has created an impressive body of work that examines the political and economic structures of the art world. In 2013, Fraser’s work was the subject of a major retrospective at the Ludwig Museum in Cologne where she was also awarded the prestigious Wolfgang Hahn prize. We examine why Fraser, a successful artist in her own right, has been deemed by the American art world as too shocking for a US retrospective. 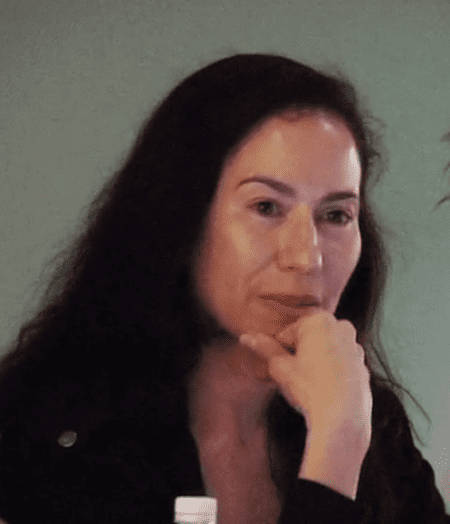 Controversial, provocative, shocking. Those are just a few words used to describe the work of Andrea Fraser, Montana-born and California-raised performance artist and proponent of institutional critique – an artistic practice that critically analyses the way the art world works through art itself.

Her main body of work, produced between the mid-1980s and the present, has critiqued many aspects of the contemporary art world. In her video piece Museum Highlights: A Gallery Talk (1989), Fraser subverted the art museum tour, posing as art world docent ‘Jane Castleton’ – a made-up persona through which she parodied bombastic art jargon, at one point lauding a water fountain to levels of artistic genius.

In Fraser’s photographic series White People in West Africa (1989/1991/1993), comprised of found images and her own photographs, she employs institutional critique in a wider socio-political sense to examine white tourism within the contexts of colonialism and neo-colonialism. Viewers see common interracial discourse in the images – a benevolent female tourist befriends African children; a male tourist overlooks an African village from a hilltop position; white children occupy the forefront of an image while native Africans are consigned to the background.

Kunst muß hängen (Art Must Hang) (2001) sees Fraser re-enact, word-for-word and gesture-for-gesture, a speech by the late, provocative German artist Martin Kippenberger. Made in 1995 while he was intoxicated, the speech, in Fraser’s words, was laden with homophobia, misogyny and xenophobia – viewpoints she suggests that Kippenberger affected as a caricature of the German art scene at that time, her re-enactment becoming an institutional critique of Kippenberger’s own critique.

Yet Fraser’s provocative and wry observations, while perhaps an uncomfortable truth for those participating in the art world, are not necessarily entirely new or polemical.

In 1970 Hans Haacke exhibited Information at the Museum of Modern Art in New York which mimicked a poll asking museum goers their opinion on then governor of New York and presidency candidate Nelson Rockefeller’s controversial policy stance. Rockefeller also sat on the museum’s board of trustees at that time, thus Haacke brought under critique the involvement of a politician in the museum’s activities and direction.

As part of an exhibition at the short-lived Claire Copley Gallery in Los Angeles in 1974, conceptual artist Michael Asher removed a wall separating the gallery space from the company’s offices, portraying the gallery’s business dealings as art, or part of art, itself.

Interestingly, Fraser, despite numerous exhibitions in her homeland and her appointment as a Professor in New Genres at UCLA’s Department of Art, has commonly found a more accepting art audience in Europe. It was a German institution, the Ludwig Museum in Cologne, that gave Fraser her first major retrospective in 2013.

Again, it was a German organisation, the Gesellschaft für Moderne Kunst (Society of Modern Art) that awarded Fraser her highest accolade in conjuntion with her retrospective – the prestigious Wolfgang Hahn Prize which recognises contemporary artists who have consistently developed their art and achived inetrnational acclaim.

As the Economist noted, ‘Ms. Fraser is well represented in public collections in Britain, France and Germany, but considered too daring for an American retrospective.’

What exactly is it about Fraser artworks that the American art world finds ‘too daring’? Is it simply that American art museums and galleries find it hard to tolerate Fraser’s institutional critique? Perhaps. Though Fraser’s turn towards body-based performance in the early 2000s, what the Kemper Art Museum calls her ‘provocative performance that focuses insistently on the body of the artist herself’, that has earned her work descriptions of daring, shocking and controversial.

In 2001 Fraser performed Official Welcome which was commissioned by the MICA Foundation in New York and executed during an opening speech for the unveiling of the foundation’s new art piece at a private event of one of its members. During Official Welcome, Fraser mimics art personalities and patrons, before stripping down to just her underwear and shoes, proclaiming, ‘I’m not a person today. I’m an object within an artwork.’

In the same year, Fraser created a videotaped performance titled Little Frank and his Carp (2001). Filmed via hidden cameras at the Guggenheim Bilbao in Spain, the piece sees Fraser adopt the persona of art museum visitor and is recorded listening to the museum’s audio tour guide. As she wanders the museum, the audio guide prompts her to admire the architecture of the building, designed by Canadian-American architect Frank Gehry (the ‘Little Frank’ of the artwork’s title), failing to mention the art collections featured in the museum. Fraser reacts as she is prompted to – enthralled she takes in the museum’s architecture. She starts to caress the museum walls, overcome with emotion and fascination, and in a moment of architectural paraphilia, hitches up her dress and begins humping one of the museum’s pillars while fellow museum goers look on bemusedly.

Watch Little Frank and His Carp by Andrea Fraiser (2001):

Fraser, while edging towards more controversial elements of nudity and sexual display, had yet produce her most controversial work to date. That came in the form of Untitled (2003), a video piece exhibited at the Friedrich Petzel Gallery in New York City in 2004. In the hour-long video, Fraser has sex on screen with an art collector who paid $20,000 to participate in the artwork.

Perhaps unsurprisingly Untitled caused ripples within the art world and beyond. New York Times reporter Guy Trebay wrote a feature on the exhibition, which Fraser felt was unintentionally misogynistic – certainly Trebay’s terming of Fraser as ‘hooker with the heart of gold’ didn’t add to the video’s legitimacy as artwork. The New York Daily News also picked up the story, seeing fit to include it in the newspaper’s gossip column, calling Fraser a ‘consummate artist’.

Fraser, defending her work in an interview with the Brooklyn Rail, said, ‘Well, yes, it’s art, and the question I’m interested in posing is whether art is prostitution – in a metaphorical sense, of course. Is it any more prostitution because I happen to be having sex with a man than it would be if I were just selling him a piece?’

And as controversial or provocative as Untitled may be, framing the exchanges made within the art world and showing how art has become a commodity, Fraser again expertly executes her critique over the art world, and the players within it, herself included.

Whether audiences or art critics view Fraser using her body as daring or unethical, Untitled nevertheless raises important debates as to the mechanisms of the art world and how an artist can be considered ‘free’ when she is criticised for engaging controversial subject matter. As Jan Verwoert wrote in Frieze Magazine, ‘Her works make you experience the full force of the ideologies and power structures that govern the art world, asserting the autonomy of critical art by increasing the disenchantment with the concept of artistic freedom.’

Though Fraser, while maybe exiled from the American art world to an extent, and consigned to a more accepting European audience, is nonetheless pleased with her most controversial work: ‘For me, one of the clearest signs that Untitled is a successful piece is that it didn’t only upset people outside of the art world, but a lot of people inside the art world as well.’