An Introduction To N.W.A. In 10 Songs 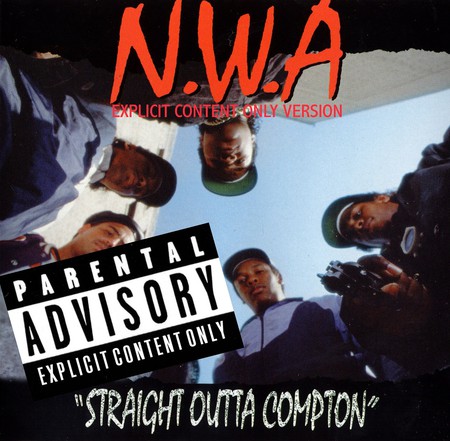 Short for ‘N*ggas Wit Attitude’, N.W.A is best known for popularizing the subgenre that exploded in the late 1980s and early 1990s known as ‘gangsta rap’. The 2016 movie that shares its title with their first album, ‘Straight Outta Compton’, depicts their rough rise to success, refocusing attention on the social unrest that swept the nation and its parallel movements today such as the Black Lives Matter protests. While outsiders deemed their music as hardcore, the members dubbed their own sound ‘reality rap’, because it primarily illustrated their tough childhoods in South Central Los Angeles. Meanwhile, middle class suburban kids across the country shockingly went wild for it as well, and NWA proved so influential in the short time they were together that their pursuits forever altered the landscape of hip hop music. The group was comprised of Eazy-E, who co-founded the label they produced on, Ruthless Records, along with Dr. Dre, Ice Cube, DJ Yella, and MC Ren.

One of the most incendiary songs in music history, Fuck Tha Police infamously got N.W.A into trouble with law enforcement and earned the group cease and desist letters from the FBI. Ironically, it was the FBI’s actions that helped cement the group’s popularity when their refusal to cease and desist earned them widespread attention.

This was the lead single from their eponymous first album, and it was fitting as it offered a pitch-perfect introduction to their energetic, indignant attitude as Alpha males from the hood. Verse by verse, Ice Cube, MC Ren, and Eazy-E respectively went head to head introducing themselves as powerful, dangerous men. They clearly wore the label with pride and this song is all about establishing their dominance as ‘a crazy motherfucker from tha street’.

A song that is now remixed and used innocently in Pepsi commercials, it goes without saying that Dr. Dre’s catchy beats and melodic rap on this track have an enduring appeal that transcends its original message. The tune itself is actually not an N.W.A original; their version of the song emphasized the title ‘express yourself’ with a profound message about freedom of speech in the music industry and overruling the strict limits of what kinds of pop music were considered acceptable for commercial radio play. Ironically this song became one of their most mainstream hits.

Following with the theme of social commentary within their own communities, N.W.A took on the dark cycle of drug use and sales in South Compton. They criticized both the dealers, who were controversially idolized, and also the addicts who bought from them and enabled them to gain power. While they rapped about criminal activity themselves, their refusal to align themselves with the turmoil drug use caused their communities set them apart, and the frustrations they rapped about in this song gave voice to the feelings of many other discouraged individuals.

After their first album and a successful tour, Ice Cube caused disruption when he left the group over financial squabbles. His departure meant losing possibly their most powerful lyricist, but it did inspire a series of ‘diss songs’ aimed at insulting him. This was the most obvious attempt to discredit his influence, calling him a traitor and asserting they were better off without him.

For true gangstas like these, ‘Life ain’t about nothing but bitches and money’. Always promising to keep it real, N.W.A has no qualms telling it like it is, and at times reducing their realities to caricatures of their lives on the streets. Nevertheless, Ice Cube is truthful about both the dangers and the pleasures of being a gangster as he spits this song along with Eazy-E.

This was one of the singles from their highly anticipated second album called ‘N*ggaz4Life’. All the remaining members of the group had something to prove with this song. The ensemble rap included Ren, Dre, and Eazy each simply destroying the lyrics just like they talk about destroying everything else in their wake.

This was the first track recorded after their debut album, and after Ice Cube left the group. Dr. Dre had to step up from producing and rap on the song along with MC Ren and Eazy-E, but his mix for this song is also incredible. The lyrics are all about what it’s like to run from the police, and the rhythms give the feel of feet desperately pounding the pavement trying to achieve escape.

This song truly showcases Eazy-E’s signature rapping style and inimitable drawl. His almost conversational tone tells his story of life in the hood, once again written by Ice Cube. This song is an autobiography, and Eazy is one of the most captivating natural storytellers to ever charm an audience with tales of drinking too much malt liquor.

Boyz In The Hood

While technically not an official N.W.A song, this is the rap single that launched the group and their careers. It’s raw lyrics were written by Ice Cube and convincingly delivered by Eazy-E. From the opening line ‘cruising down the street in my 6-4, jockin the freaks clocking the dough’, the world was hooked on their philosophy of being legit, even if that meant breaking some rules.