An Introduction To Iggy Pop In 10 Songs 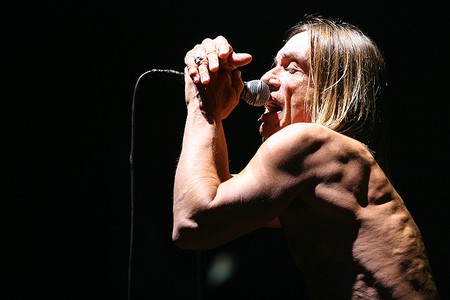 The musical life of Iggy Pop is a gold mine. Frontman to The Stooges, who were inducted into the Rock and Roll Hall of Fame in 2010, he’s performed solo and even collaborated with David Bowie and Green Day. He remains known for a wild kind of unpredictability in his stage presence that keeps crowds entertained and in love. The legacy of Iggy Pop lives on through his timeless influence.

One of two singles, this track comes from the first studio album of The Stooges, produced in 1968. The Stooges were Iggy Pop’s entrance into the world of studio-produced music, after previously playing in a high school band. ‘I Wanna Be Your Dog,’ off of the self-titled album, made its impact through its three-note riff that carries through the entirety of the song, along with its uses of heavy guitar and sleigh-bell sounds. The song established itself as the kind of sound that would place The Stooges on a heavy metal/punk pedestal, and its popularity has cemented a spot as one of the greatest songs of the time, according to multiple magazine charts.

Another track to be ranked by Rolling Stone as one of the ‘500 Greatest Songs of All Time,’ ‘Search and Destroy’ comes off of The Stooges’ third album, Raw Power. The song was originally released in 1973, and mixed by David Bowie, but was remixed in 1997 by Pop and Bruce Dickinson. The title comes from an article about the Vietnam War, and in its remix, the song becomes a more aggressive version, fit to the destruction of its titular theme.

Pop departed from The Stooges in 1977, and released a debut solo studio album, called The Idiot. The album is a collaboration between David Bowie and Pop; ‘Nightclubbing’ was written by the pair, recorded in Berlin, and features Bowie on the piano. Its lyrics are about the haunting feeling that can come from the night. The song is considered one of Pop’s biggest successes, coming off of an album that is often regarded as one of Pop’s best works.

‘Lust for Life’ comes from the album of the same name, which continued to be a collaboration between Pop and Bowie as Pop produced solo albums. The album is Pop’s most commercially popular album to date, and the titular track has its own place on Rolling Stone‘s ‘500 Greatest Songs of All Time’ list. For this track, Bowie wrote the music and Pop, the lyrics, with a rhythm inspired by the Armed Forces Network call signal. The opening drumbeat received praise as well, and was imitated in Jet’s, ‘Are You Gonna Be My Girl.‘

‘Sister Midnight’ was performed live first, and then put on The Idiot the following year. It’s another collaboration between Pop and Bowie, and when the two retreated to the French castle of Herouville, and began putting together The Idiot. The album’s recurring funk influence can also be found in ‘Sister Midnight,’ which pulls from futuristic and dream-like places of inspiration.

While this track isn’t one of Pop’s original works, his version of it became wildly popular. Originally called ‘Wild One,’ by Johnny O’Keefe, Pop reproduced it on his seventh studio album, Blah Blah Blah, which came around after a four-year hiatus. Bowie served as a collaborator on this album as well, but it would prove to be the pair’s final collaboration. The cover was released as a single, and was Pop’s first track to hit top ten in the UK.

‘Candy’ comes from Pop’s ninth solo album, Brick by Brick, and shows Pop performing a duet with B-52’s Kate Pierson. It was the second single off of the album, and became Pop’s biggest mainstream hit. It’s a story of a grieving man and his heartbreak, alternating with Pierson’s verses in which she is the woman around the heartbreak, telling her side of the story, and ultimately her own feelings of loss.

In 2001, Pop self-produced his album, Beat ‘Em Up – the first album he self-produced. The album held echoes of Pop’s long ago album, Raw Power, which made it popular with long-standing Pop fans because it felt so much like the very origins of his works. The album also saw Pop take part in the band, The Trolls, who received credit on the album. ‘Mask’ is Pop’s place within the album to ask where the human soul is, and it’s a question he answers in a later song, ‘Sterility.’ ‘Mask’ was performed on tours, and once on the Late Show with David Letterman, with its popularity and positive response assuring that Pop would forever be a rock favorite.

9. Little Know It All

The long and illustrious career of Iggy Pop refuses to go down quietly – or go down at all. Pop released his latest album on January 22, 2016, titled Post Pop Depression. It’s his seventeenth studio album, and ‘Gardenia’ was the single to come off of it. The song was received warmly, and made it onto multiple top charts in different countries. The album itself was recorded in secrecy, and offers collaborations with bands like Queens of the Stone Age. The song is a representation of what Pop is now, and after over thirty years, what the track mostly proves is that Iggy Pop still knows how to rock.