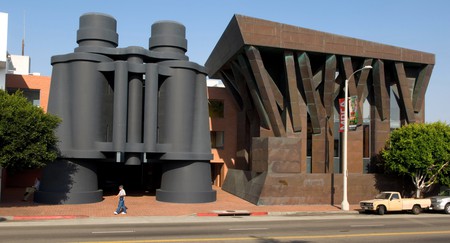 Los Angeles’ architecture is a feast for the eyes, and as diverse as it is fascinating. While the city’s Art Deco masterpieces get the most glory, the many mid-century modern homes and Postmodern offerings – advanced by architects like Frank Gehry – should not be overlooked. Discover the best of the city’s Postmodern buildings on this architectural tour.

Designed by Frank Gehry and opened in 2003, the Walt Disney Concert Hall in downtown Los Angeles is on the list of must-visit attractions in LA for architecture buffs. Particularly recognisable for its trademark Postmodern futuristic style and fragmented structure, the building is one of several on the LA Music Center campus, and it’s also the home of the LA Philharmonic and the Los Angeles Master Chorale. According to the Library of Congress, the building is covered in over 12,000 stainless steel panels, which, if laid end to end, would stretch for 49 miles (79 kilometers). 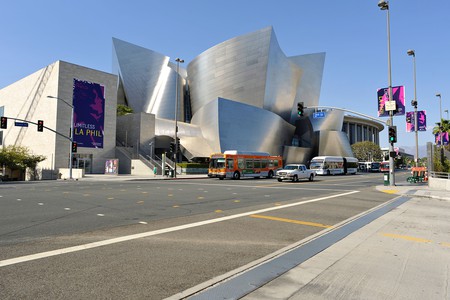 The Loyola Law School was designed by Frank Gehry in the late 1970s, then built over the next several years. Gehry was hired for the project before he was a big name in architecture, on the suggestion of Professor Robert Benson. According to the LA Conservancy, Gehry created the design by “drawing on classical settings like the Roman Forum to visually evoke the history and weight of the legal profession.” The campus consists of multiple buildings and a parking garage, the most visually arresting being the Fritz B Burns Academic Center – the campus’ largest structure and a vibrant yellow in color.

The Bunker Hill Steps are 103 in number, and are cut in half by a sloping water feature that connects a fountain at the top to a basin at the bottom. They were designed by landscape architect Lawrence Halprin and constructed in 1990. Christopher Hawthorne writes in the LA Times, “In romantic as much as literal terms, Halprin’s design is meant to recall the Spanish Steps in Rome, a debt that makes this project a textbook example of Postmodernism in landscape architecture.” 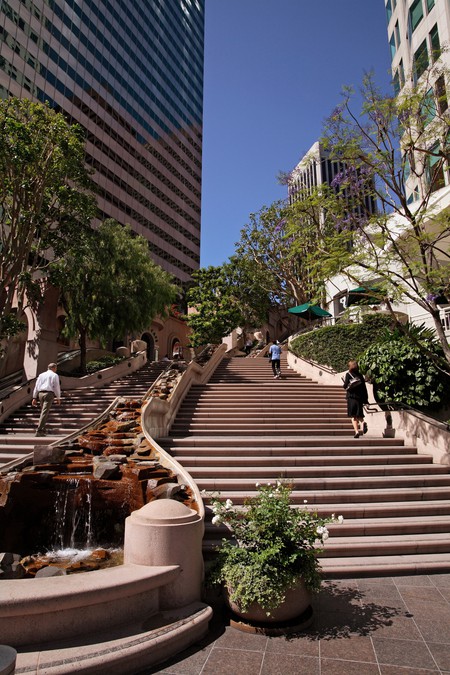 Located in Van Nuys, this water-treatment plant has doubled as Starfleet Academy in Star Trek, thanks to its sleek, futuristic design. The plant was built in 1984 and designed by architect Anthony J Lumsden, while the Japanese garden was designed by Koichi Kawana. The idea for the garden came from the plant’s namesake, Donald Tillman, who thought a garden that used reclaimed water from the plant would be a positive design element to incorporate. The beautiful garden is consists of three separate areas and a tatami mat teahouse. It is open to the public, and general admission costs $5.

The Museum of Contemporary Art (MOCA), designed by Japanese architect Arata Isozaki, opened in downtown Los Angeles in 1987. It is a distinct reddish color, with pyramids rising out of the top. Though it is surrounded by high-rises, much of MOCA is actually below street level. Outside, visitors can find Nancy Rubins’ monumental sculpture entitled Chas’ Stainless Steel, Mark Thompson’s Airplane Parts, About 1,000 Pounds of Stainless Steel Wire, and Gagosian Beverly Hills Space. 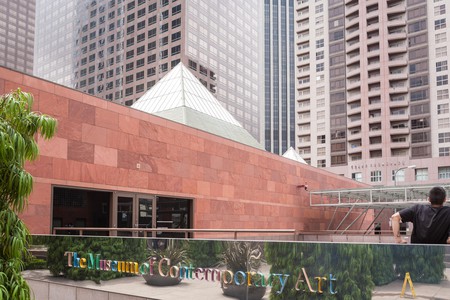 One of the oddest examples of Postmodern architecture in Los Angeles is a Kentucky Fried Chicken joint located on Western Avenue in Koreatown. Built in 1990 – by which time Postmodernism had become a prominent style after its emergence in the 1960s – it looks like a KFC from a dystopian future where everything is run by corporations: a large, gray bucket with fins, topped by a cube with the colonel’s face. From some angles, it looks somewhat like a robotic chicken. The building was designed by architect Jeffrey Daniels of Grinstein/Daniels Inc at the behest of franchisee Jack Wilke, who had asked Daniels’ partner, Elyse Grinstein, to help put his KFC on the map. According to the LA Times, this was “the first architecturally avant garde Kentucky Fried Chicken outlet in the United States, and the famous franchise’s first break with its own rigid formal tradition.”

The Westin Bonaventure is hard to miss, given that it comprises four looming, reflective cylindrical towers. Built in 1976 and designed by architect John Portman, the LA Conservancy called it, “a postmodern icon, isolated from the larger metropolis and operating by its own strange spatial rules.” Inside, water features and glass elevators share space with a lobby bar and a number of shops and restaurants. It’s possible to get a cocktail, dinner and a haircut here. The hotel has also played itself in a variety of TV shows and films, perhaps most notably in True Lies (1994), in which Arnold Schwarzenegger rides a horse into one of the building’s elevators while pursuing a bad guy on a motorcycle. 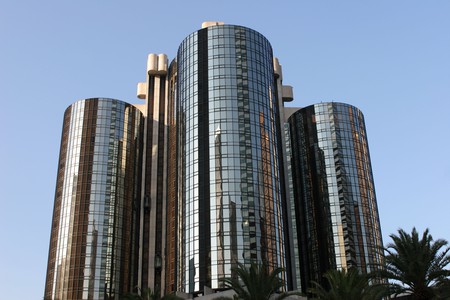 The 777 Tower is one of the tallest buildings in Los Angeles. It is a 53-story, neutral-toned skyscraper that, according to the LA Conservancy, “epitomizes the Postmodern use of a stretched skin style with reimagined Classical details in a simple and elegant design.” It was designed by architect César Pelli and built in 1990.

Yet another Frank Gehry building, this one features something the others certainly do not: a giant pair of binoculars. Located in Venice and built over the course of the ’90s, this office building features a slanted awning that protrudes from a dark-brown fortress, together with a white, boxy building, with the binoculars connecting the two. Cars must drive between the lenses of the binoculars to access the parking garage. 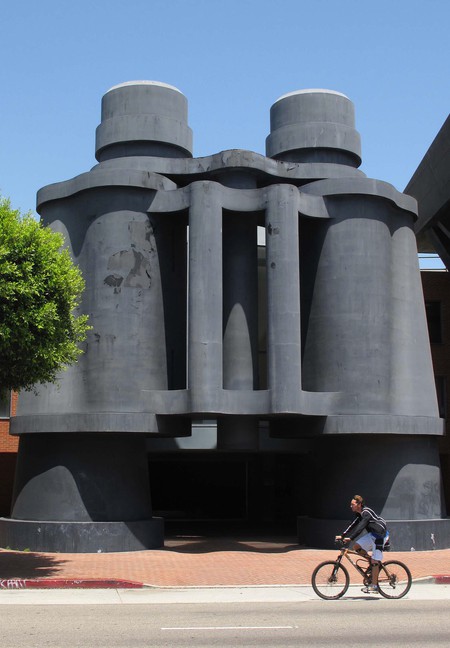