The Shrine At Patricia's Green: A Temple For The Community 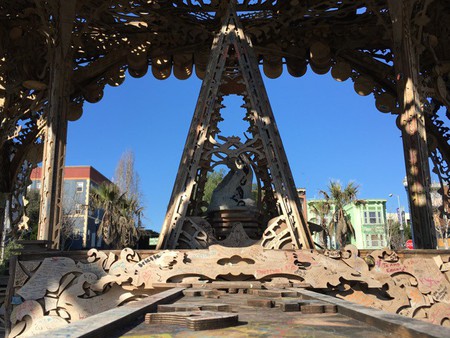 Art has always been an integral part of San Francisco’s greater community. From film festivals in the Castro to the MOMA downtown, the city has diverse taste. But what gives San Francisco soul are the external works and installations, the pieces that disrupt quiet parks and the architecture of old buildings. The temple at Patricia’s Green is one such artwork and has come to transform the neighborhood’s perspective on connection. 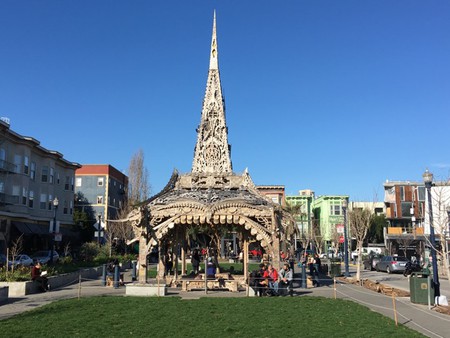 Sitting in the small garden of Patricia’s Green, it is difficult to imagine a freeway once ran through the area. Nearly 30 years ago, the small park in Hayes Valley was a much rougher area. After the earthquake that shook the city in 1989, the damage done to the freeway left the small area in disarray. The destruction left room for seedy behavior and made for an unsafe neighborhood. In the early 1990s, Patricia Walkup founded the Hayes Valley Neighborhood Association to help clean up the area and rebuild the space into a public park. The park was then founded in her name. 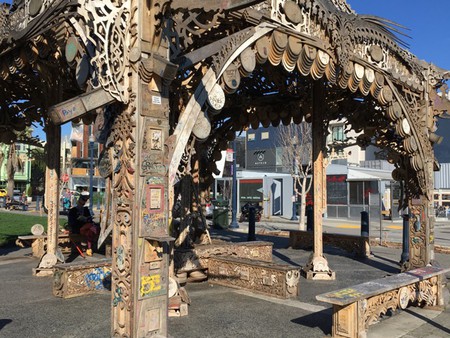 Several years later, in 2005, the San Francisco Arts Commission and Black Rock Art, a Burning Man affiliate, collaborated to bring Patricia’s Green to life with an art installation. David Best’s art was the first choice. Best is a San Francisco native and sculptor best known for his extravagant temples constructed and burned at the Burning Man Festival in Nevada. He built an interactive temple, which quickly became a treasured centerpiece to the new park. Ten years later, the San Francisco Arts Commission could think of no better way to commemorate Best’s temple than with a new one. However, this temple is on a much grander scale.

The current temple, set up and completed in June 2015, stands at 37-feet high and 15-feet wide. And it is magnificent. The installation is made almost entirely out of wood and is an intricate collage of designs. On the outside, the temple has an ominous appearance with its spiked architecture. Much of the wood is placed so that each entry appears to have a pair of menacing eyes and an wide opened mouth to match. Underneath the temple, it opens into an elaborate and beautiful shrine. At the center hangs a giant pendulum that nearly grazes the lower pyramid that rests at the base of the temple. Each corner is decorated with complex wooden chandeliers, and the posts are layered with wood pieces giving it an almost 3D appearance. 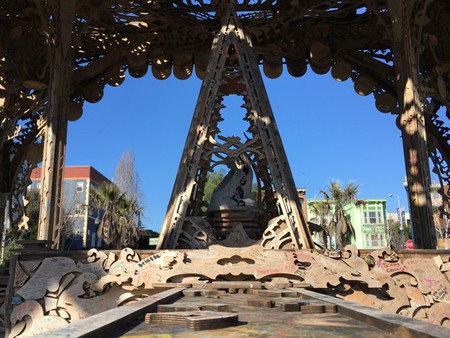 But the temple isn’t just Best’s work of art, it belongs to the entire community, to visitors from downtown and out of town, in the square and down the street. The community has been asked to share in Best’s work and be vulnerable in a space that is open to everyone. Best has said that the temple is nothing but an empty building, ‘it has no life until the community brings that life to it.’ So visitors are encouraged to write on the temple and share personal messages to loved ones. The entire temple is a canvas for other artists to contribute their work. Nearly all of the wood has been covered in drawings, words of hope, and prayers for loved ones. 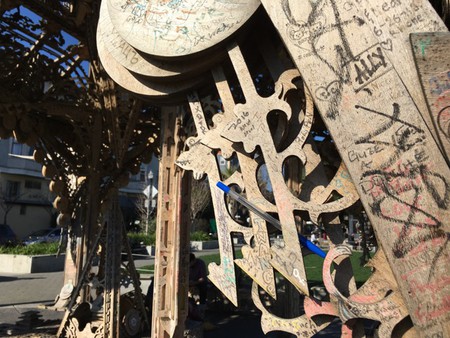 It’s breathtaking standing among so many stories. There are few places where graffiti, art, writing, and storytelling are encouraged. The temple, like any shrine, cathedral, or church, has the unique ability to connect people. It allows people to be a part of something larger than themselves. Even parks have a way of bringing people together. This art installation is a collaboration of the mundane with the spirit of nature and community. It attracts the lost and the curious and the skeptical because it is unique and contrasts with its surroundings. The temple is gritty and dirty and beautiful, just like our city.

Although much of the temple is covered in art and messages, much of it is still blank. It can only be a matter of time before a daredevil, or someone with a ladder, will fill in the empty space and add to the impressive structure. The temple will be up for one year, so make sure to visit several times if you can. You never know what it will look like the next time you see it.