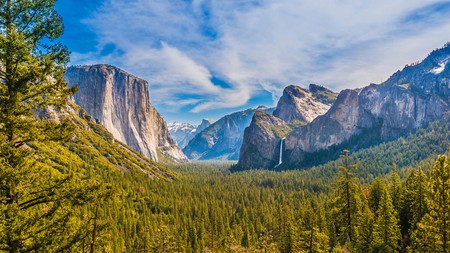 Yosemite National Park is California‘s living natural museum. Famed for its iconic Tunnel View upon entering the park, Yosemite is a nature lover’s destination with over 747,000 acres (302,300ha) of wilderness to explore, unique geological formations, and a diverse biological makeup with one of the largest intact habitats in the High Sierra. With parts of Yosemite reaching into the Sierras, this region plays host to numerous landscapes, including waterfalls and streams, valleys, meadows, lakes and rivers, mountains, giant sequoias, and granite peaks carved by glacial erosion millions of years ago.

Yosemite National Park has been a protected area since 1864 when naturalists, including Galen Clark, lobbied to preserve Yosemite Valley – President Abraham Lincoln signed the protection into law later that year. At the end of the 19th century, explorer John Muir advocated for the inclusion of the surrounding forests and mountains of Yosemite Valley, establishing the Yosemite National Park in 1890 and paving the way for the National Park Service, created in 1917. An area of vast wilderness, forests, and mountains, Yosemite is most famous for its granite peaks and deep valleys that bear witness to an era once characterized by glaciers. The park has been recognized internationally as a World Heritage Site since its designation in 1984, and today, it brings in over 3.5 million visitors a year. 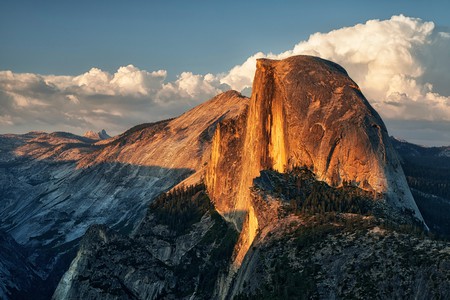 Across its 1,200mi (1,931km) of wilderness, Yosemite has plenty to explore; however, most visitors spend their time in the Yosemite Valley. Popular sights include Mariposa Grove, an area filled with ancient sequoia trees (closed for renovations until 2017); Tunnel View, the iconic vista of El Capitan, Half Dome, and Bridalveil Fall; and Glacier Point, one of the most breathtaking panoramic views of Half Dome, Yosemite Valley, and the Sierra Nevada mountains. Other must-see sights include Tuolumne Meadows, a vast meadow surrounded by mountains, domes, and a winding river; Yosemite Falls, one of the tallest waterfalls in the world; Half Dome and El Capitan, large granite rock formations (visible from various viewpoints); and Hetch Hetchy, a glacial valley and reservoir. There are also a number of other rock formations, waterfalls, meadows, and forests along with numerous viewpoints.

Outside of hiking and backpacking, visitors can also take advantage of other activities, including horseback riding, picnicking, biking, bird-watching, camping, rock climbing, fishing, swimming, boating, and rafting – there are even things to do during the winter. Yosemite is also a popular destination for artists, painters, and photographers as a center for remarkable imagery and breathtaking views. For the less athletically inclined, there are guided tours, the Yosemite Museum, the Ansel Adams Gallery, the historic Wawona, and shopping in Yosemite Village. 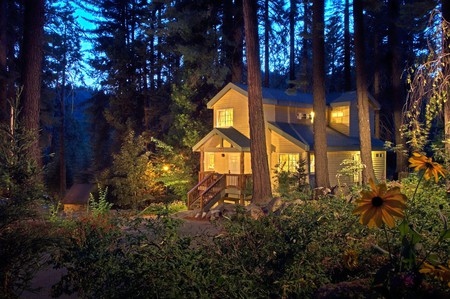 For lodging within the park, there are 13 campgrounds to choose from – many of which can be reserved and accommodate RVs – along with other budget-friendly options like Yosemite Valley Lodge or the Half Dome Village; or opt for a more lavish stay and head to Ahwahnee Hotel, the Tenaya Lodge at Yosemite, or the Little Ahwahnee Inn. For more middle-of-the-range stays, check out Wawona Hotel, the Redwoods in Yosemite vacation rentals, or Yosemite West Condos. For lodging outside the park, there’s the Mariposa Lodge and the Yosemite Bug Resort, both budget-friendly; for more options, check out the neighboring towns of Coulterville, Groveland, El Portal, and Mariposa.

Keen to visit but not sure where to start with planning your trip? Consider joining Culture Trip’s specially curated seven-day Northern California trip, which includes several other fantastic destinations as well as Yosemite National Park.