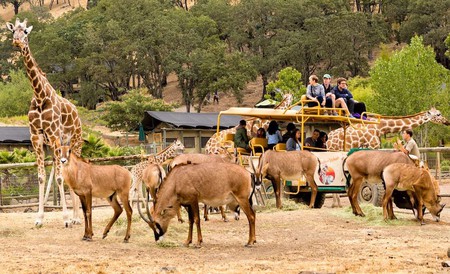 Between fields of grapevines and rustic restaurants in Northern California’s wine country is a herd of African wildebeests. These large antelopes, native to eastern Africa, live at Safari West—a 400-acre wildlife preserve in Sonoma County’s Santa Rosa. The reservation houses 40 species of mammals and 73 species of birds, in a park designed to feel like an African savannah in the middle of California.

Unlike a traditional zoo, Safari West’s animal residents roam throughout the grounds (okay, a few carnivores are kept separate to keep them from eating their neighbors).

According to park spokesperson Jared Paddock, the park service team isn’t there to bring the animals to you, but rather bring you to the animals. “We meet them in their homes and on their terms,” Paddock said. “As a result, we see things that simply can’t happen elsewhere, from natural competition and courtship to surprising displays of affection and play.”

Nancy and Peter Lang founded their unexpected animal oasis back in 1993. Before that, it was a love of animals that first brought the two together: Peter grew up with exotic animal actors hanging around the sets of the TV shows and movies his father, Otto Lang, directed (the elder Lang was involved in shows like Flipper and Daktari). Nancy is a former curator of the San Francisco Zoo’s avian collection. The couple met, appropriately, on safari in Africa.

Sonoma was the perfect place for the Langs’ passion project, Paddock said, because the temperate and Mediterranean-like climate and landscape of the area isn’t far off from the animals’ native environment. “The hills of the Mayacamas Mountains provide an ideal setting for the species we house in the Safari West collection,” he said. “Many of our species have evolutionary origins in environments not unlike ours, which makes them well-suited for life here. In addition, the variation in features and terrain within the large enclosures allows the different species to capitalize on unique niches.”

The aoudad (a mountain goat-like mammal), for example, tend to hang out in the eastern canyon area of the park’s “Hundred Acre” enclosure, while the cape buffalo and wildebeest, who prefer the plains, usually stay closer to the hills on the area’s west side. 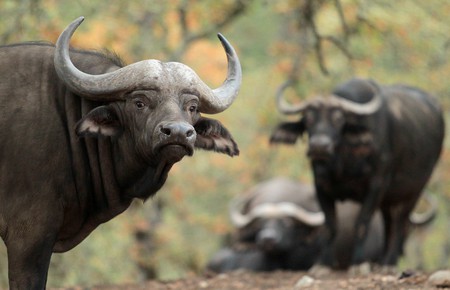 Visitors to Safari West can choose to go the classic safari Jeep route and observe the animals alongside a trained naturalist guide, or they can take advantage of one of the park’s more specialized offerings. There are private tours, tours focused on more academic topics, behind-the-scenes experiences such as acting as a keeper for a day, or spending the night in one of the park’s upscale tent camps. And yes, there is a wine and safari tour, and yes, it is called Winos and Rhinos. This is Sonoma, after all.

“Each day, our guides and guests go out exploring, and we never really know where we’ll find the herds or what they’ll be up to when we do,” Paddock said. “Some visitors might get an up-close-and-personal visit from a too-friendly giraffe, while others might witness the birth of our newest wildebeest. Every day is truly an adventure.”

Although its setup is a little different than that of a traditional zoo, the park is part of the Association of Zoos and Aquariums and works closely with other local facilities like the San Francisco, Oakland, and Sacramento Zoos, the Aquarium of the Bay, and the Monterey Bay Aquarium. Conservation and educational work attract teams from around the country to the preserve, Paddock says, and they partner with conservation groups dealing with similar species in Africa as well. 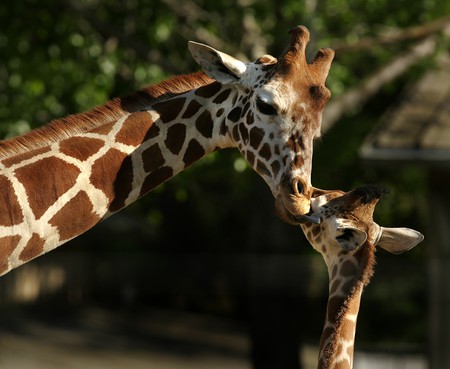 Like so many homes and businesses in Santa Rosa, Safari West withstood some damage in 2017’s deadly wildfires. But considering the park’s size and scope, things could have been much worse. Despite the preserve being in the path of the flames, the large hill beside it largely kept it safe. No animals were injured, and facility damage was minimal. While the fire hit the Langs’ home, Peter Lang focused on keeping the more than 800 animals out of harm’s way, according to a video update posted on the preserve’s website.

“Having put these animals here in the first place, you just can’t run off for your own well-being and forget them,” Lang said in the video. The flames also took out the site’s osteology lab, where researchers had been studying the anatomy and taphonomy of the hoofed ungulate. For now, that work is on hiatus.

“At this time, we’re just wrapping up repairs in the wake of the 2017 fires and indeed, only reopened our tent camp this month,” Paddock said. “Now that life has returned to normal, there will no doubt be new projects taking off soon.”