The Ferry Building on San Francisco’s Embarcadero, once the gateway to the city, is now a destination for foodies; dozens of stalls and high-end restaurants serve up the diverse flavors of this cosmopolitan city. Illustrator Tanta Vorawatamakul goes in search of the soul of a historic landmark that has secured its future through culinary innovation.

You see the Ferry Building long before you reach its entrance; its 245-foot clock tower is visible for miles. Once the gateway to San Francisco, with 50,000 commuters passing through it every day in the first few decades of the 20th century, it is today the best all-year market in the city.

In addition to specialty food purveyors, who run the gamut of culinary experiences from rustic authenticity to fine dining, visitors will discover trusted local brands selling books, handcrafted ceramics and even gardening tools for urbanites.

The best times to visit are on Tuesday, Thursday and (especially) Saturday mornings, from 10am during the week and 8am at the weekend until 2pm, when the CUESA’s Ferry Plaza Farmer’s Market is on. This San Francisco tradition began as a one-off event in 1992 and quickly evolved into a regular event, bringing together locals, tourists and vendors with the best produce of any market in the city.

When it was built in 1898, the Ferry Building was somewhere to hurry through on your way on or off a boat or cable car, albeit while marveling at the tilework and double-height skylighted ceiling; now, it’s a destination in its own right.

Tanta Vorawatamakul explores the sights, sounds and flavors of this San Francisco landmark in a series of original illustrations. 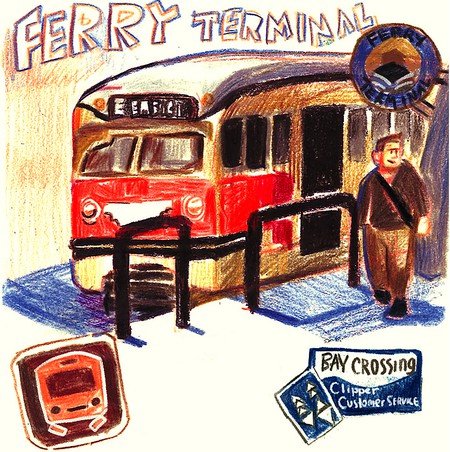 Whether you approach on foot along the Embarcadero, in a cable car down Market Street or by ferry from across the Bay, the Ferry Building catches your eye and holds your gaze from miles away.

To stroll through it is to experience a San Franciscan symphony. The patter of feet on century-old tile mixes with the echo of customers chatting with vendors, of friends laughing together; this most human of music shrinks the 660-foot expanse of the Grand Nave to a warm, welcoming living room. There are no strangers here, it seems. 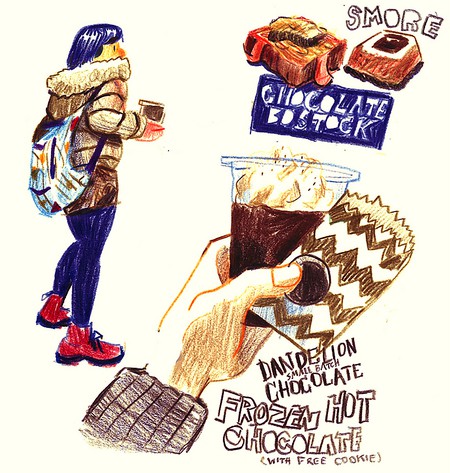 Sight and sound might be the first senses stimulated by the Ferry Building, but it’s to satisfy their appetite for one-of-a-kind flavours that most San Franciscans come here. Don’t forget to try the unexpected depth of the frozen hot chocolate at Dandelion Chocolate. 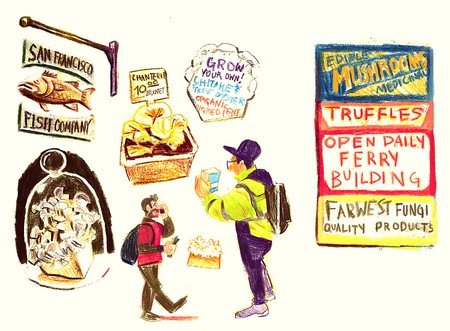 Everywhere you go, the air is imbued with the rich fragrances of savory and sweet food being prepared in dozens of stalls and restaurants. The award-winning artisanal, local and organic cheese at Cowgirl Creamery and champiñones (mushrooms) and small bites at El Porteño Empanadas are prominent notes in the medley. 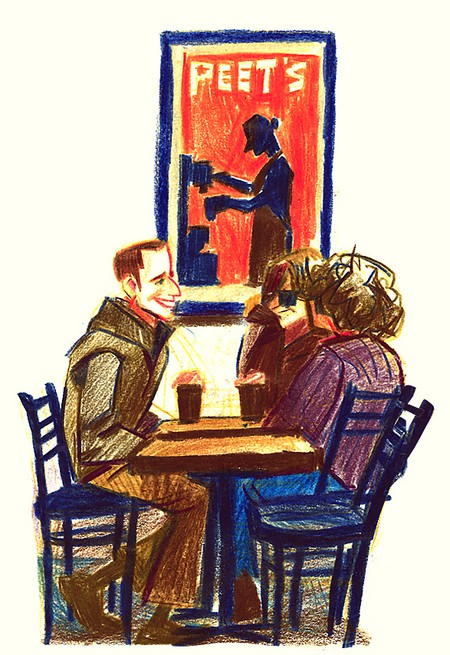 For a taste of the sea, head to the Hog Island Oyster Company; its shellfish is hand raised further north along the coast in Tomales Bay. The Slanted Door serves up modern takes on recipes devised on the far side of the Pacific Ocean: Vietnamese classics such as pho and spring rolls.

Once one of the busiest commuter hubs in the world, the Ferry Building suffered from the proliferation of personal automobiles and the construction of the Bay and Golden Gate bridges. In the second half of the 20th century, it fell out of people’s minds, filled with humdrum offices and overshadowed by a since-demolished freeway.

In 2003, it reopened to the public after a four-year renovation project. Now, once sated by everything the marketplace has to offer the senses, you can amble along the waterfront; on clear days, you can see past the Bay Bridge and Treasure Island to the shores of Berkeley. In the ferries still bustling back and forth across the Bay, you can see into the past of this building, of this ever-changing city.