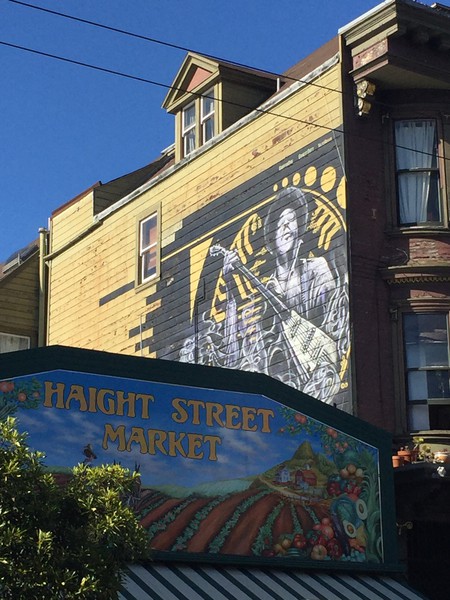 San Francisco’s star-studded rock ‘n’ roll history is no secret. But what may be a secret, even to some natives, is that many of its iconic music spots dating back to the early 20th century are still around today. Follow Culture Trip’s self-guided tour for the best of rock ‘n’ roll’s venues, recording studios, and the residences of its stars.

Start in the heart of the Summer of Love, the birthplace of long-haired, free-spirited hippies: Haight-Ashbury. Unsurprisingly, the former homes of many Woodstock greats are located in what is now an upscale neighborhood. First head over to 710 Ashbury Street, the former residence of The Grateful Dead that is now a private home. But standing outside the magnificent Victorian home, it is easy to imagine the musical genius that was once housed within its walls. Look down at the sidewalk in front of the house for a small portrait of Jerry Garcia.

Walk a few houses down to 635 Ashbury Street, the most famous home of Janis Joplin. The pink, ornate Victorian dates to 1905 and is a private residence. Then turn and you’ll be on the corner of Haight Street and Ashbury Street, the intersection that started it all. Just three buildings down Haight Street is 1524a, or the ‘Red House,’ the former apartment of Jimi Hendrix, located above a tobacco shop. Two beautiful murals are located on the building’s façades, including an all-purple mural of Hendrix, guitar in hand, that was erected by three Bay Area artists ahead of the Summer of Love’s 50th anniversary in 2017. 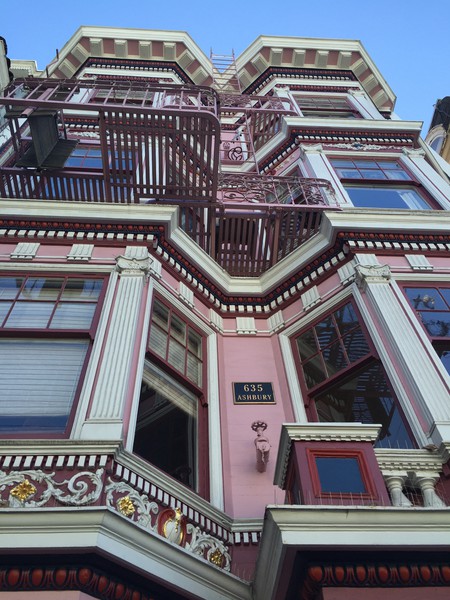 Walk down Haight Street until it meets Stanyan Street at Golden Gate Park and turn right. In five blocks, you will hit Fulton Street, the location of ‘The Airplane House,’ also known as ‘The Mansion.’ The former home of the psychedelic rock group Jefferson Airplane, located at 2400 Fulton Street, is a sight to behold, with its colonial revival style Roman columns stretching above the entrance. Though it is now a quiet, residential home, The Mansion was legendary for its wild parties with band members, groupies and fans alike.

Drive or take the short Muni Ride to the Fillmore District, the historic entertainment hub of the city. After the 1906 earthquake, this area was quickly established as the entertainment district, and some of the venues built in that era are still standing today. One of these venues is The Fillmore, on the corner of Geary Boulevard and Fillmore Street. Once known as Majestic Hall, the building opened in 1912 as a dance academy and served as a dance hall and a roller rink until finally becoming a premiere venue for African-American rock ‘n’ roll artists in the 1950s, hosting greats like Ike and Tina Turner, James Brown and the Bobby ‘Blue’ Band. Then, as San Francisco became the counterculture capital, it launched the careers of the Grateful Dead, Jefferson Airplane, Big Brother and the Holding Company, Carlos Santana and countless others. To this day, the venue is still a premiere intimate setting to see both up-and-coming and popular acts.

Head east along Geary Street and turn right on Polk Street. On the corner of O’Farrell is the elegant Great American Music Hall. Built in 1907 as a symbol of resilience after the earthquake, the venue feels like a blast from the past, with its ornate, elaborate balconies and columns. Rolling Stone Magazine ranked it 6th in its Best Clubs in America list, and with reasonable prices, it is definitely one of the best venues in the city. 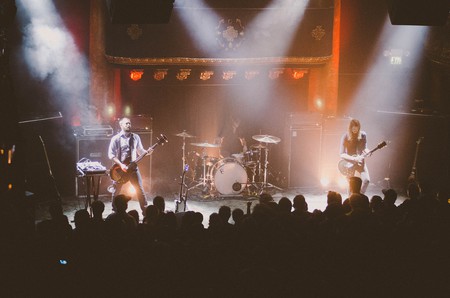 Walk four more blocks down Polk Street and turn left on Eddy Street, where you will find the location of the infamous Phoenix Hotel, popular with some of rock music’s greatest stars. Formerly known as the Caravan Lodge, it was founded in 1960 and has been frequented by Neil Young, Buddy Hackett, David Bowie, REM, the Red Hot Chili Peppers, Pearl Jam, Norah Jones and the Killers, among others. The hotel is filled with strange, psychedelic décor, and the pool is actually a national historic landmark. In the 1990s when the lodge was revitalized and renamed the Phoenix Hotel, the owner, Chip Conley, commissioned artists to paint the pool, but the city informed him halfway through the project that all public pools had to be painted white. So, Conley worked with legislators to devise a bill making the pool a national landmark, meaning its artwork could not be painted over.

Continue down Eddy Street for two more blocks until you reach Hyde Street, then turn right. On your right is Hyde Street Studios, the Bay Area’s longest-running multi-room recording studio. The studio was founded in 1969 as Wally Heider Recording, and Crosby, Stills, Nash & Young recorded their famous album Déjà Vu there shortly after. In its early years, the studio produced recordings by the Grateful Dead, Carlos Santana, Jefferson Airplane, Creedence Clearwater Revival, and others. In the 1980s, it changed ownership and became Hyde Street Studios, which became an epicenter for the flourishing punk and hip-hop scenes, recording albums by the Dead Kennedys, Tupac Shakur, Green Day, Digital Underground and others.

Walk down Hyde Street and turn right at its end onto Grove Street. Situated in the Civic Center Plaza is the Bill Graham Civic Auditorium, named after the notorious rock promoter Bill Graham, who virtually single-handedly made the psychedelic rock movement flourish in San Francisco. The venue, which seats up to 6,000, was built in 1915 as a part of the Panama-Pacific International Exposition and is one of its only surviving buildings. Originally known as the San Francisco Civic Auditorium, it was named after Bill Graham in 1992 following his death. It has hosted The Grateful Dead, The Red Hot Chili Peppers, The Who, Janis Joplin, Jefferson Airplane and others, but it has more than just concerts in its history – in 1920, it hosted the Democratic National Convention, and it was the home of the Golden State Warriors between 1964 and 1966. 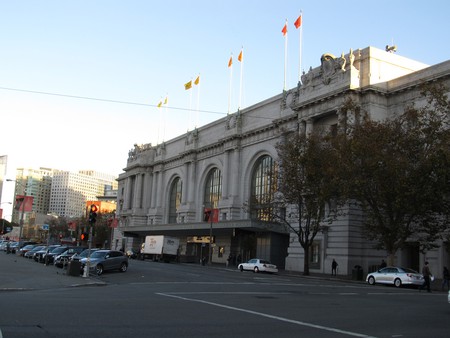 Head back towards Market Street and walk down three blocks to the intersection of Market and 6th Street, the site of another famous theater – the Warfield. Originally built in 1922 as a vaudeville theater, the Warfield became a rock venue in 1979 when Bill Graham Presents booked Bob Dylan to perform there for a set of shows. The theater, which seats 2,250, has an ornate interior similar to other performance venues built during the era.

Finally, either walk 1.2 miles or take the BART or Muni Metro to the Embarcadero stop. At Market Street’s end, you will reach Justin Herman Plaza on your left, across from the Ferry Building. On November 11, 1987, U2 decided that morning to give an impromptu ‘Save the Yuppies’ free concert in this plaza, where about 20,000 people assembled within a few hours. During the band’s performance of the song ‘Pride (In The Name Of Love),’ lead singer Bono painted graffiti on the plaza’s Vaillancourt Fountain reading, ‘Rock ‘n’ Roll Stops Traffic.’ The incident, which was featured in U2’s movie Rattle and Hum, caused a huge controversy, and Bono was issued a citation for misdemeanor malicious mischief. Though the graffiti has since been painted over, standing in the plaza imagining 20,000 spectators cheering for the iconic band is a sight to behold. 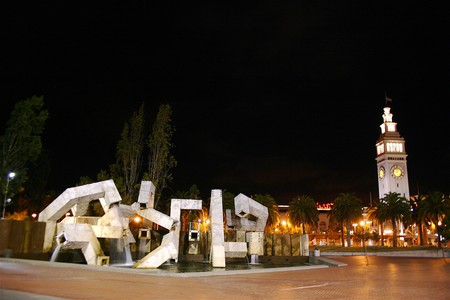 From Justin Herman Plaza, it is easy to catch the BART, Muni or ferry to your return destination.