A History of the Golden Gate Bridge

The Golden Gate Bridge spans the three-mile-long (4.8 kilometers) Golden Gate Strait connecting the Marin Headlands to the city of San Francisco. Completed in 1937 after four years of dangerous, complicated work, the bridge stands as a testament to human ingenuity and intelligence.

Why the Golden Gate Bridge was built

Before the Golden Gate Bridge was constructed, much of the Bay Area was connected by ferry services. In the late 19th century, San Francisco was one of the fastest developing cities in the United States, but it hit a major speed bump as it started to develop into a major city center. With a lack of quick, reliable transportation (especially after the development of the affordable car in the early 20th century), the city stagnated and stopped growing. Although the ferry service was popular at the time, many locals called for a bridge to be constructed so that people could travel more easily and quickly. One of the first propositions was to have a monumental suspension bridge built over Fort Point at the tip of the Golden Gate Strait. 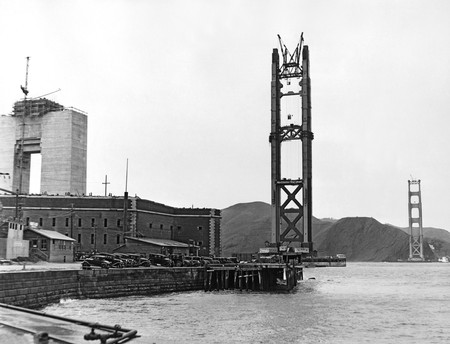 Fact: Fort Point was originally the Spanish-held Castillo de San Joaquin and was built in 1794 with an adobe structure housing nine to 13 cannons.

Conception of the bridge

Although proposals had been around since the late 19th century, many engineers and architects believed it impossible to build a bridge over such a long channel, with its strong tides, deep water (372 feet at its deepest) and heavy outbursts of wind and fog. It wasn’t until 1916 that James Wilkins, a former engineering student, created one of the first feasible proposals for a complicated bridge costing around $100 million (over $2 billion in today’s money). Although many shrugged off the idea, engineer and poet Joseph Strauss believed he could pull off the impossible feat. Following concerns from the Department of War and the competing ferry services, Strauss finally began construction in 1933,

Fact: The Golden Gate Strait was originally named Chrysopylae (or Golden Gate) by US Army Captain John C Frémont. Supposedly, it reminded him of a harbor in Istanbul named Chrysoceras, or Golden Horn. 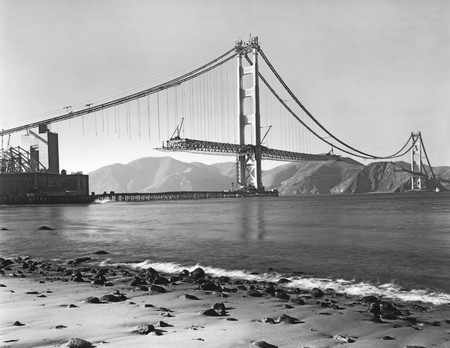 Who built the Golden Gate Bridge?

Although Joseph Strauss is remembered as the main engineer and designer behind the Golden Gate Bridge, he ended up having very little to do with its iconic look. Strauss, although accomplished at building smaller inland bridges, had never completed a work of this scale and magnitude. Like any good leader, he pooled engineering and design talent from all over the country. The three major heads under him were Leon Moisseiff (who designed the Manhattan Bridge), Irving Morrow and Charles Ellis. Morrow, a relatively unknown architect at the time, added some of the most important designs to the bridge, as he envisioned the overall shape of the bridge’s towers, its lighting scheme, its Art Deco elements and the famous international orange color.

Fact: The US Navy originally planned to paint the bridge with black and yellow stripes to ensure visibility for passing ships. 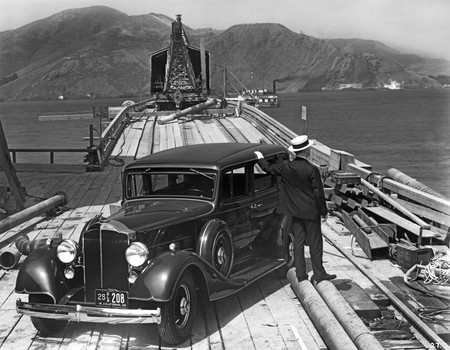 On January 5 1933, the $35 million project began. As of 2016, it’s still unknown how many worked on the bridge, as there were 10 prime contractors and their records have unfortunately been lost to time. Strauss was strict about keeping the project on schedule and often oversaw the day-to-day construction. The bridge was finally completed on May 27 1937, purportedly under budget due to Strauss’s supervision. 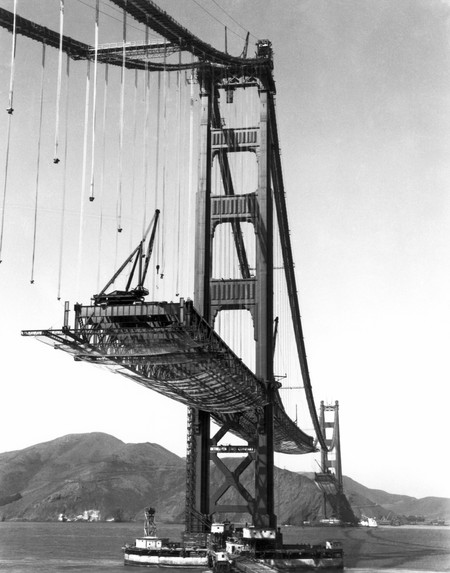 The Golden Gate Bridge under construction, with the roadbed being suspended from the cables | © Underwood Archives/UIG/REX/Shutterstock

How big is the Golden Gate Bridge?

At the time of completion, the Golden Gate Bridge was the longest suspension bridge in the world (it was surpassed in 1964 by the Verrazano-Narrows Bridge in New York City). During construction of the bridge, over 1.2 million steel rivets were used to hold the bridge together; on average, one tower segment contains over 60,000 rivets. The large sections of cable on the bridge were made from over 27,000 individual steel wires and over 80 miles worth of wire was used.

Fact: As of today, the Akashi Kaikyō Bridge in Japan is the longest suspension bridge in the world at a staggering 1.24 miles long.

The dangers of construction

One of the most innovative features of the construction of the bridge was an idea forwarded by Strauss to hang a huge safety net under the bridge so that if workers fell they would (hopefully) be saved from a cold watery death in the Pacific. Even with this safety net, 11 men died during the project; one fell past the net and 10 others perished when a chunk of scaffolding fell with them and destroyed the safety barrier. Although 11 deaths is nothing to shrug off, this was seen as monumental achievement, as construction work at the time was extremely dangerous; a ‘mere’ 11 deaths was seen as a blessing. The implantation of hard hats and the rigorous safety standards by Strauss saved the lives of many workers and created the Halfway to Hell Club, which constituted 19 men who survived a fall into the safety net. 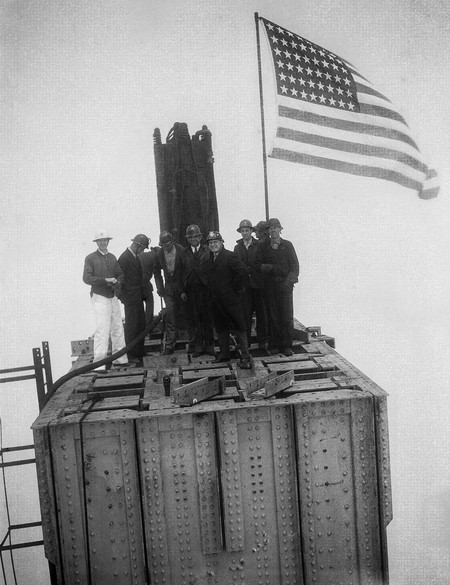 Fact: Members of the Halfway to Hell Club became celebrities in the Bay Area, and one member, Al Zampa, even had a play produced about his exploits on the Golden Gate Bridge.

When did the Golden Gate Bridge open?

The bridge opened on May 27 1937. The opening celebration of the Golden Gate Bridge lasted for over a week and around 200,000 people crossed the bridge before traffic was allowed on it. It was quite the spectacle at the time, as invitations were mailed out inviting people from all over to enjoy the bridge and partake in the parties that accompanied it. There was even an official song: ‘There’s a Silver Moon on the Golden Gate,’ which was created and sung to commemorate the event. 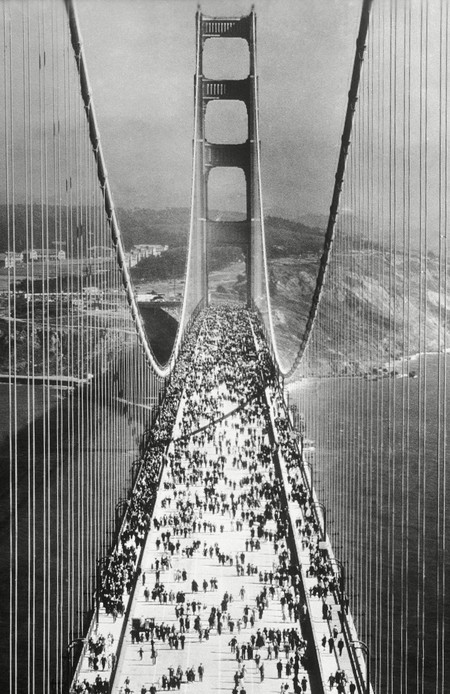 The Golden Gate Bridge, the longest suspension bridge in the world at the time, was opened on May 27 1937 | © AP/REX/Shutterstock

Fact: Strauss wrote a poem called ‘The Might Task is Done‘ after completing the bridge. This is the first stanza:

At last the mighty task is done;
Resplendent in the western sun
The Bridge looms mountain high;
Its titan piers grip ocean floor,
Its great steel arms link shore with shore,
Its towers pierce the sky.

Featured in countless photographs, films, songs and the like, the Golden Gate Bridge rivals the Statute of Liberty as one of the most famous symbols in American popular culture. Today, the bridge regularly ferries thousands of people across the strait and still shines just as brightly as it did when it originally opened in 1937. 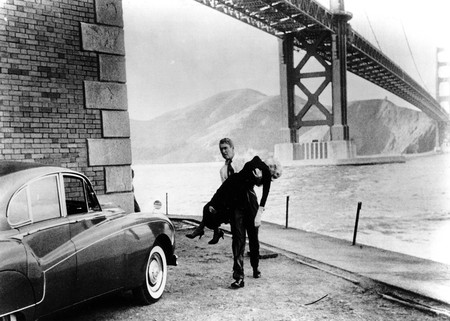 Fact: Many people falsely believe the bridge is re-painted every few years, but in fact, a steady team is constantly touching up the paint as it helps prevent the high salt content of the air from eroding the steel components of the bridge. 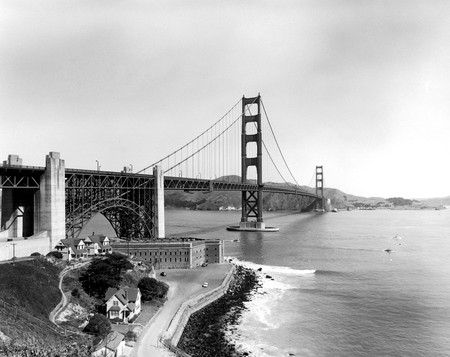