A Guide to LA Awards Season

From the Golden Globes to the Oscars, Beverly Hills hotel suites to Hollywood cocktail bars, here’s our guide to where the stars shine during Los Angeles’s awards season.

The beginning of the year is also the beginning of awards season in Los Angeles. For two months, celebrities don their most expensive jewels and designer duds and tighten up their plastic surgery to work the red carpets. Even the stars who usually shun the spotlight step up their game for the town’s prime time.

Your guides to the award shows

First up is the Golden Globes, usually held at a swanky hotel in Beverly Hills where all the guests get to eat and drink. Honoring the past year’s achievements in film and TV, the Globes are sponsored by the Hollywood Foreign Press Association, a philanthropic organization that funds entertainment-related scholarships and charities. 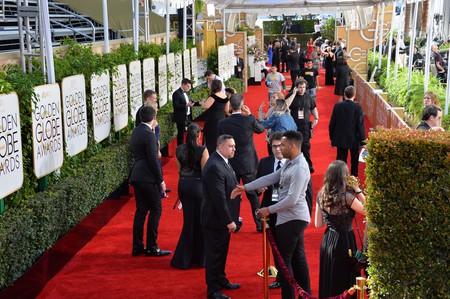 The Screen Actors Guild hands out its awards during a ceremony at the Shrine Auditorium at the end of January. SAG not only honors film and television actors but also stunt performers (who are also garlanded at the Taurus World Stunt Awards in May). The SAG awards are considered a good predictor of which movie actors will triumph at the Oscars.

The Writers Guild of America throws its party in mid-February, when it hands out awards to writers of movies, TV and radio shows, and video games. Usually hosted by an actor or a comedian, the Film Independent Spirit Awards take place under canvas in Santa Monica, with champagne flowing, the night before the Oscars.

Awards season officially ends with its most anticipated event, the Oscars (or Academy Awards) at the end of February. The first ceremony (a private event) took place in 1929 at the Hollywood Roosevelt Hotel on Hollywood Boulevard; since 2002, it’s been held a three-minute walk from the hotel at the Dolby Theatre. 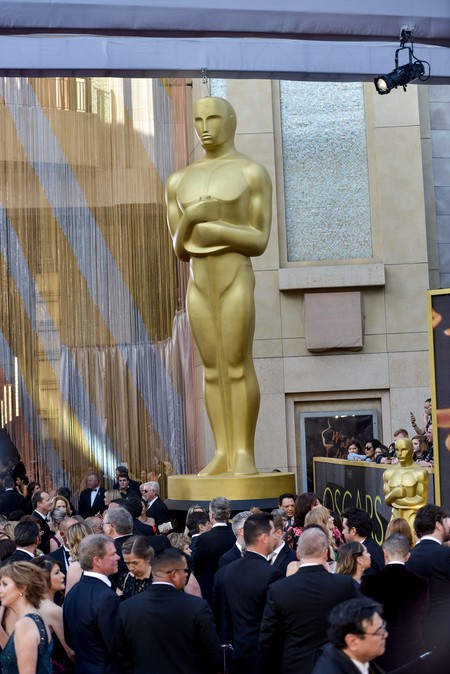 The Art Deco pillars outside the Dolby are engraved with the names of all the Best Picture Oscar winners; inside is one of the largest stages in the world. It’s hard to get a glimpse of the stars arriving for the big night because tight security keeps the public at bay. However, you can try entering the lottery for seats in the outdoor bleachers by registering on the Academy Awards website several months before the event.

Of course, celebrities only spend a few minutes strolling down the red carpet. During awards season, most of their time is spent in the suites and spas of LA’s fanciest hotels. The queen of them all is The Beverly Hilton. Charlie Chaplin and Orson Welles used to drink in the Polo Lounge, and Elizabeth Taylor and Richard Burton once trysted in the bungalows. Also, the famous 1977 “morning after the Oscars” photo of Faye Dunaway was taken by the pool. 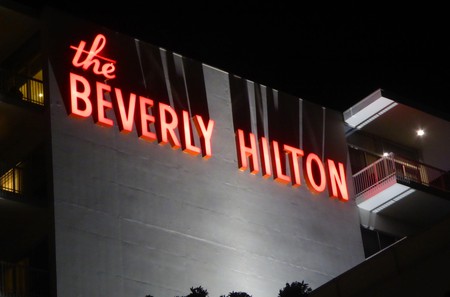 Equally legendary is the Chateau Marmont, a historic hotel that has been home to stars such as Greta Garbo, Jean Harlow, James Dean, Warren Beatty and Lindsay Lohan. You can hang out at the Bar Marmont and have the weird experience of seeing a famous face sipping wine across the room from you and looking down from a billboard across the street at the same time. A-listers also get their glam on at The Four Seasons, filling their suites with racks of gowns and fleets of handlers. The hotel also hosts a variety of screenings, dinners and other events throughout awards season. 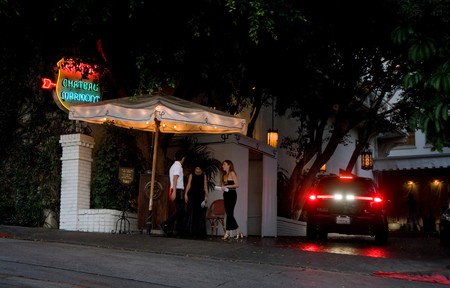 In lieu of seeing the stars in the flesh at awards time, there are plenty of enticing local places to watch them presenting and receiving shiny objects on TV. The popular Hollywood gay bar The Abbey – once a favorite hangout of Elizabeth Taylor – throws a fierce awards-viewing party, where the wit is sharp and the drinks are strong. Located in the Kimpton Everly Hotel, the Ever Bar offers a classy cocktail menu and expansive views of the city, while the Paley is another bar that takes its cues from old-school glamour. But wherever you wind up in Los Angeles, Oscar night – Hollywood’s equivalent of the Big Game – is impossible to miss.