A Brief Overview of Diego Rivera’s Murals In San Francisco 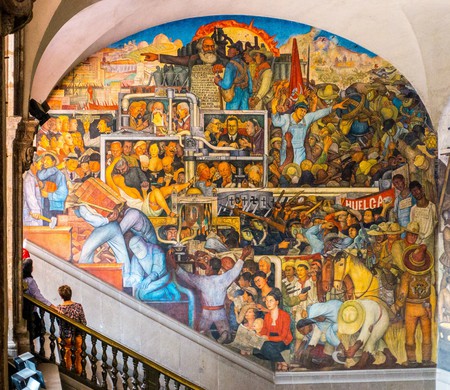 Influential Mexican painter Diego Rivera was born on December 8, 1886 as Diego María de la Concepción Juan Nepomuceno Estanislao de la Rivera y Barrientos Acosta y Rodríguez. Rivera quickly went on to become one of the most important and famous Mexican artists of all time, and his fresco work helped to establish the thriving Mexican Mural Art Movement. Rivera quickly became renowned for his Communist-tinged Latin American works and his rocky marriage to fellow Mexican painter Frida Kahlo. From the 1920s to the 1950s, Rivera traveled all over the Americas and even graced San Francisco with three powerful murals that many citizens forget exist. These three frescos were meant to be an ever-constant reminder of public art, and they continue to inspire new artists to this day. The following are three Rivera murals you don’t want to miss.

The Allegory of California

In 1931, Rivera completed his first mural at The City Club Of San Francisco in the Stock Exchange Tower. The Allegory of California is a relatively small mural with a huge female figure representing the state of California and Calafia, a mythical figure who is often called the Spirit of California. The mural adorns an art-deco staircase and has the ‘state’ of California supporting its citizens and showcasing its natural bounty (the fruits in her left hand). Below California are two men with a blueprint and mathematical tools, a lumberjack next to a downed tree, a man with a model airplane, an elderly man with some farming utensil and two Latino farm workers. This plethora of California blue collared workers was in line with Rivera’s communist/socialist beliefs and was meant to highlight the average worker that kept the state afloat. The mural also extends to the ceiling and details two nude women, a variety of planes and a personified sun. This piece was extremely controversial at the time (mostly due to his political beliefs and ethnicity), and Rivera used Olympic gold medalist Helen Wills Moody as the model for California. 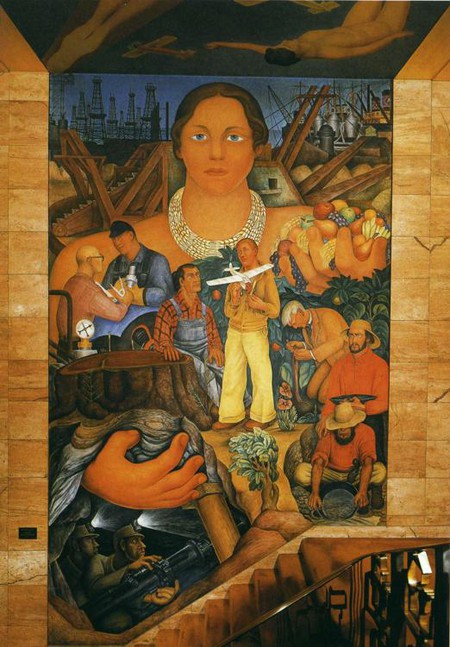 The Allegory of California | © Joaquín Martínez/Flickr

Due to this piece being located in a private location (something that Rivera did not traditionally enjoy doing), it is somewhat hard to see. You can schedule a guided tour when it is open Monday to Friday from 3pm-5pm.

The Making of a Fresco Showing the Building of a City

This famed mural was commissioned by SF Art Institute President William Gerstle in 1931 and was completed in only one month (May, to be exact). The large mural attempts to show the inherent correlation between artistic works and general labor. As an active member of the Mexican-Communist Party, Rivera was heavily influenced by Marxist principles, and his artwork heavily reflected his political views. This five-sided piece shows an internal view of the construction of a large building and has various real life figures (including Rivera) who were meant to represent general designers, builders, painters, architects and laborers. This piece literally shows every stage of the architectural progress and has been seen as an allegory for Rivera’s own work. Like The Allegory of California, this piece was met with considerable criticism but has quickly become one of the most famous murals in the entire city. 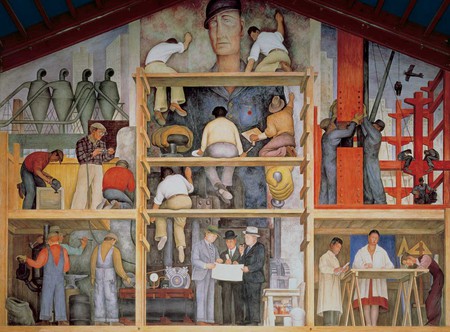 This mural is open to the public everyday from 9am to 5pm. If you’re near the northern end of the city, you owe it to yourself to take a short stop and view this wonderful piece of artwork.

The last mural that Rivera completed in California is often seen as one of his most underrated and impressive art pieces outside of Mexico. The mammoth 22-feet tall and 75-feet wide mural is made of 5 separate panels and is the last major fresco piece he created in the United States. The piece is located in the Diego Rivera Theater and is nearly impossible to describe as it encompasses a huge amount of history, culture and subjects. Rivera said that, ‘My mural will picture the fusion between the great past of the Latin American lands, as it is deeply rooted in the soil, and the high mechanical developments of the United States.’ The huge piece attempts to showcase America development from pre-European tribes to the gigantic skyscrapers that defied 20th century America. You could honestly look at this piece for hours and still find new details or subjects to explore. 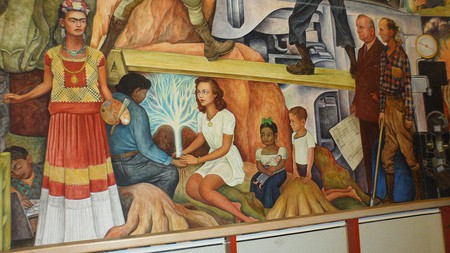 Unfortunately, due to major budget cuts at CCSF, the hours to view this piece are not concrete, and you should call to confirm if the mural is open to public viewing that week.