A Brief History Of The Sunset Strip's Most Iconic Nightclubs 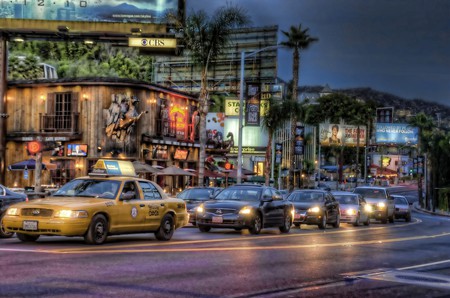 The world-renowned one-and-a-half-mile stretch of Sunset Boulevard, known as the Sunset Strip, has dazzled movie stars, locals, and tourists alike for decades. While the Strip has now somewhat tamed, laden with fine dining restaurants, couture shopping, and fancy hotels, it was once so much more thrilling. The Culture Trip looks back on the glory days when these ten glimmering nightclubs and infamous music venues had Sunset blazing.

The Sunset Strip first became a popular nightlife destination during prohibition in the 1920s, as its location (outside of LAPD jurisdiction but accessible to LA city locals) made it relatively easy for speakeasies to operate. One such speakeasy, Café La Boheme, owned by retired opera singer Joe Borgia, featured a dance floor with live music upstairs and an illegal gambling hall downstairs. While not extravagant, La Boheme had an outlaw allure that brought in crowds of Hollywood socialites and party-enthusiasts. The club was shut down for a short period in 1932 then reopened with the Vaudeville cross-dressing act Creole Fashion Plate before it was raided and permanently closed in 1934. The building was subsequently purchased by The Hollywood Reporter founder, Billy Wilkerson, who renovated and reopened the club as Café Trocadero.

One of the most illustrious clubs in LA history, Café Trocadero (known as “the Troc”), served as the premier watering hole for LA industry elites from 1934 to 1947. Renovated in French style décor, the upscale club saw countless stars, such as regulars Fred Astaire, Bing Crosby, Cary Grant, Nat King Cole and Lucille Ball, walk through its doors. Wilkerson maintained Borgia’s illegal gambling hall downstairs, often playing with an inveterate circle of movie moguls that included the acclaimed film producer Samuel Goldwyn, MGM’s Irving Thalberg, and Universal Studio’s Carl Laemmle. Further, Because Trocadero and The Hollywood Reporter shared an owner, LA’s most beautiful rising and wannabe stars flocked to the club in an attempt to be photographed and written about in Hollywood’s gossip columns. With A-list patrons and roaring jazz, Trocadero was truly a glamorous venue where the old Hollywood Guard reveled in decadence.

A similar Sunset playpen for Hollywood’s rich and famous, Ciros, opened in 1940. The glitzy nightclub entertained the likes of Marilyn Monroe, Humphrey Bogart, and Sidney Poitier (again just to name a few). Ciros is not only famous for featuring some of the ’40s and ’50s greatest performers such as Dean Martin and Sammy Davis Jr., but also for hosting frequent champagne-throwing, spitting-in-faces, scandalous brawls in which Hollywood’s richest, classiest members of society went at each other (Frank Sinatra was the club’s exception to the three-strikes rule about fighting). The luxurious spot where an eclectic mix of celebrities, producers, and gangsters (Mickey Cohen was shot outside) congregated with evening gloves and cigarette holders was arguably the zenith of old Hollywood nightlife. After a 17-year run, its closure in 1957 marked a sort of turning point in the Sunset Strip’s night culture. 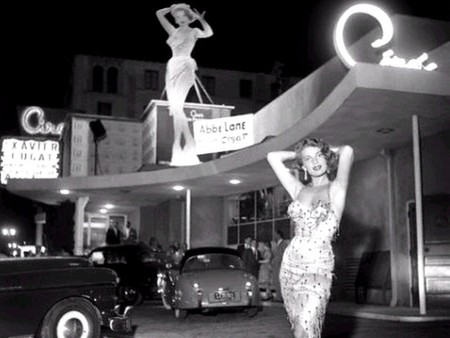 Abbe Lane outside of Ciros | © The World Famous Comedy Store/Flickr

A retail plaza now sits where the wild Macambo nightclub once invigorated the Strip between 1941 and 1958. Sprawled in Latin American-themed décor and caged exotic birds, Macambo was a festive sanctuary for the usual suspects of Hollywood socialites. Just a few blocks from the legendary Garden of Allah apartment building, which housed many of LA’s up-and-coming, Macambo was the place from which the career of the queen of jazz, Ella Fitzgerald, took off and also the spot where actor Myrna Loy and producer Arthur Hornblow threw a lavish party to celebrate their divorce. 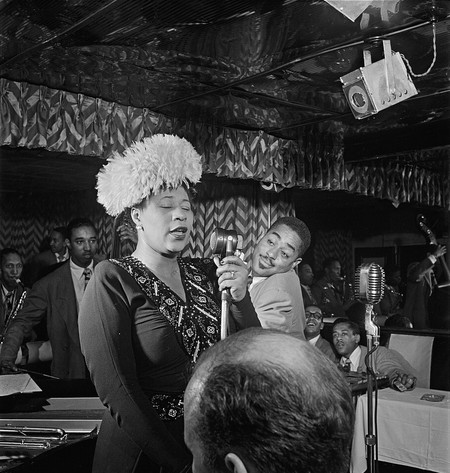 In the ’50s and ’60s, Las Vegas began to replace the Sunset Strip as the capital for glitz and glamour. As a result, the Strip went through a cultural transformation that was met with much resistance from the older generation. A number of rock ‘n’ roll joints popped up all over Sunset, and a new breed of energetic hippie types and wild-eyed kids began to roam the Strip. The ’60s rock club Pandora’s Box was a popular music venue that featured performances by artists such as the Beach Boys, the Byrds, and Sonny and Cher. The club was also the site of the 1966 Sunset Strip riots in which over 1,000 youth (including Jack Nicholson) participated in a protest against attempts to enforce a 10pm curfew and close nightclubs known for their youth scene (such as Pandora’s Box). The rock club was bulldozed that same year, but lives on in many Angelenos’ memories.

Whisky a Go Go is a historic music landmark. Opening on the Strip in 1964, the venue boasted a stage, dance floor, and girls twisting in white boots and fringed mini-dresses hanging in glass cages (later known as go-go girls). Jim Morrison and the Doors became the house band in 1966, and the nightclub served as a career catalyst for many other bands and musicians. The Who, Jimi Hendrix, Neil Diamond, AC/DC, and Led Zeppelin all played on the Whisky’s stage at one point in their careers. In 2006, Whisky a Go Go was inducted into the Rock and Roll Hall of Fame. 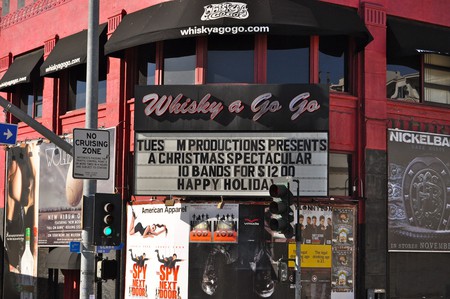 The teen dance club, Gazzarri’s, electrified the Strip from 1967 to 1993. One of a few Sunset launch pads for unsigned rock bands in the ’70s and ’80s, Gazzarri’s gave little known bands like Metallica, Guns ‘n’ Roses, and Poison a chance to perform on the Strip. Owner Bill Gazzarri (nicknamed ‘the godfather of rock and roll’) especially loved Van Halen. The band played multiple days a week for years at Gazzarri’s before they got their big break. The club oozed with an angsty, glam-rock confidence that attracted LA’s rowdy youth for decades. 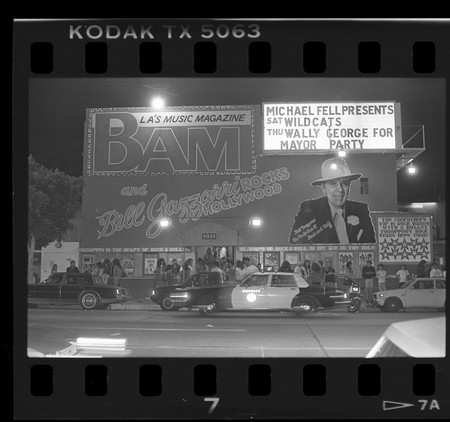 The Rainbow Bar and Grill

The loft of the Rainbow Bar and Grill notoriously moonlighted as a clubhouse for all the famous boys who destroyed hotel rooms. In fact, a plaque still hangs in the Rainbow commemorating the ‘Lair of the Hollywood Vampires,’ the social group made up of rock star drinking buddies Alice Cooper (president), the Who’s Keith Moon, songwriter Harry Nilsson, the Monkees’ Mickey Dolenz, John Lennon, and honorary members Jimi Hendrix and Jim Morrison (the exclusive list goes on), who apparently spent so much time in the Rainbow that they rarely saw daylight (hence the nickname Hollywood Vampires). The ‘glitter girls’ of the Rainbow catered to LA party brats and pretty much every famous person worth knowing in the mid-70s to the early ’90s. With its heyday arguably in the past, the Rainbow Bar and Grill now serves as a rock and roll relic.

Since 1974, well-known and fresh-faced artists, comedians, and actors have graced The Roxy‘s stage. The nightclub, first opened by Elmer Valentine and Lou Adler, replaced the Largo strip club and became a pioneering sort of music venue that sought to showcase many different genres and acts rather than pandering to a single trend or music scene. The Roxy was never confined or swept up in the glam rock of the ’70s or the heavy metal of the ’80s; instead, The Roxy brought Neil Young, The Temptations, and Genesis in ’73, The Rocky Horror Picture Show in ’74, Billy Joel and Bob Marley in ’75, and a diversity of talented performers throughout its continued run on the Strip. 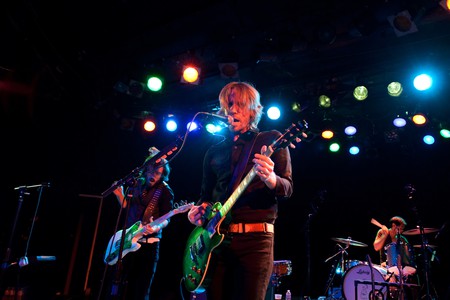 Johnny Depp co-founded the intimate, grungy Viper Room nightclub in 1993. The rock and roll den has hosted numerous musical greats, however it is more enshrined in Hollywood history as the location where actor River Pheonix tragically overdosed on Halloween in 1993. While Depp envisioned a secluded, underground sort of spot, the edgy Viper Room attracted many celebrities and saw plenty of scandals unfold within its dim-lit interior. By the late 90’s, the Strip’s popularity waned as live music moved to cities like Seattle and Austin. Depp sold his share of the club in 2006, and although it remains popular, efforts to renovate have failed to restore the Viper Room to its ’90s glory. 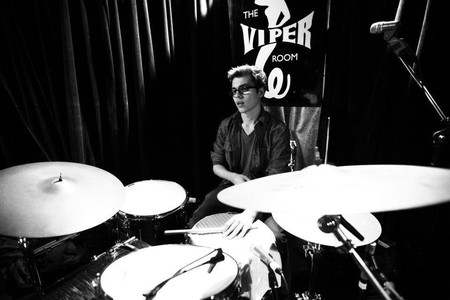 Dylan Fenley at the Viper Room | © Nhollywoodmusicnews/Wikicommons
Give us feedback