A Brief History of the San Jose Sharks

You can’t step foot inside San Jose, California, without being bombarded by teal and blue. It seems that everyone within the city (save for transplants from other major hockey scenes) represents their love for the San Jose Sharks on a daily basis. From tooth-lined license plate holders to plush beanies and even dogs wearing miniature jerseys, the city has a major case of fandom.

However, this wasn’t always true, and in fact, the Sharks have only been around since 1991. So where did these bearded heroes come from and why are they so well loved (even though they’ve never brought home the Stanley Cup)? 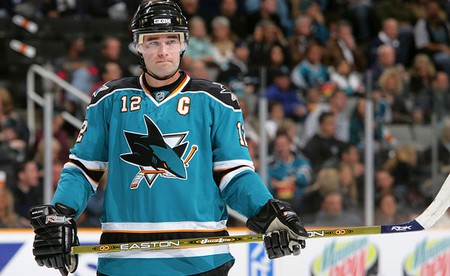 Before the Bay Area had the Sharks, there was another NHL team that dominated the Northern California ice—the California Golden Seals, founded in 1967. The team originally played in Oakland before relocating to San Jose, but after failing to bring in wins or a loyal audience, the team relocated to Cleveland, Ohio in 1976. Once in Ohio, the Seals merged with another team in 1978, the Minnesota North Stars.

Gordon and George Gund were partial owners of the Seals, now North Stars, and were unhappy with the move. They believed there was room for a team to flourish in the Bay Area and eventually sold their shares of the North Stars in order to launch a new San Jose-based franchise.

Blood in the water

The franchise owners tried to get people excited about the new team in town by launching a naming competition for the team. Thousands of people around San Jose submitted team names for consideration. The name with the most votes was the “Blades,” but the Gunds believed it had too many negative connotations, so they went with the second place name, the “Sharks,” instead.

From 1991 until 1993, the Sharks played at an arena called Cow Palace in Daly City. During its first few seasons, the team was made up mostly of minor league players and rookies, as the franchise was new and failed to attract big-name players. From 1992–93, the Sharks lost a whopping 71 games, including a 17-game losing streak, and yet the people of the Bay still rallied behind them.

During the 1992–93 season, the Sharks sold the most merchandise of any NHL team, bringing in $150 million for the league. It was also during these formative years that the team’s mascot emerged, Sharkie. Originally appearing in January of 1992 as an unnamed, finned mascot riding a Zamboni, a contest was held to name the plush oversized aquatic creature. “S.J. Sharkie” was chosen, and today, the fearsome fish is present at more than 450 events per year. 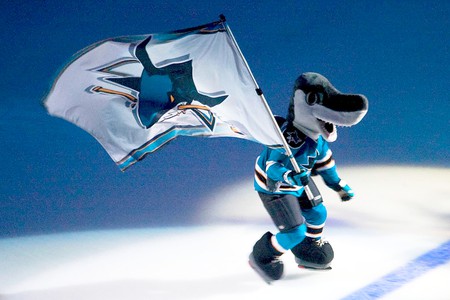 Welcome to the Shark Tank

Due to the team’s commercial success, an arena in San Jose was upgraded, and they were able to relocate closer to the bulk of their fans. The SAP Center, formerly San Jose Arena, is still where the team plays today. Locals and fans know the arena as the “Shark Tank,” and much of the city’s downtown district has been revamped to accommodate the increase in foot traffic that the venue brings in.

The San Jose Sharks bring in a unique mixture of pride and confusion to their fans. During the franchise’s nearly 30-year history, the Sharks have won one conference championship, one Presidents’ Trophy, and six division titles. Despite their successes, they’ve never managed to bring home the Stanley Cup, a.k.a. the granddaddy of all hockey awards. For years, the franchise performs well during the regular season but then seemingly chokes when it comes time to advance through to the playoffs. That all changed in 2016 when the San Jose Sharks went head-to-head against the Pittsburgh Penguins to compete in the finals for the cup, but ultimately, the Sharks lost in the seventh game of the series. 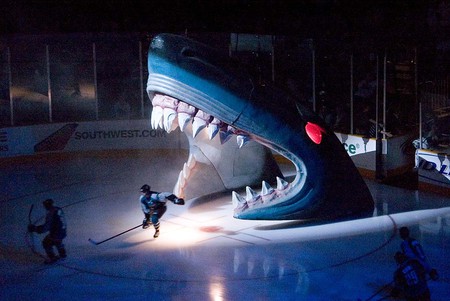 Despite their underwhelming record and relatively short history, the San Jose Sharks draw in fans like no other team in the Bay Area can. When people discuss sports in the Bay Area, they’re usually referencing teams in San Francisco—such as the 49ers or Giants. While these teams have extremely successful franchises, they don’t have the diehard following that the Sharks have cultivated over the past 20-plus years. It could be because San Francisco is full of people from all over the world who bring with them their own sports allegiances and because San Jose doesn’t have much else to offer by way of major sports teams (aside from the Sharks and the Earthquakes, a Major League Soccer team).

However, it could simply be because of the camaraderie the San Jose Sharks have worked so diligently to grow between their players and the surrounding community. San Jose locals frequently see Sharks players at their favorite grocery stores, restaurants, and public parks. In just 25 years, the team has not so much grown to represent the community as it has merged itself into the core identity of the city. You can’t have San Jose without the Sharks, and there would be no Sharks without San Jose. Regardless of their standings and troubled ties to the Stanley Cup, the Sharks will always be celebrated in the Capital of Silicon Valley.