A Brief History Of The Oakland Tribune Tower 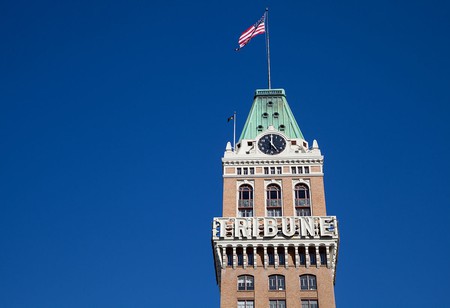 Downtown Oakland is a busy transit hub buzzing with commuters and business activities. On the weekends, the famous Paramount and Fox Theaters light up the Uptown District with world class acts, while nearby hip restaurants and trendy bars put Oakland on the map as the place to be on a Saturday night. And yet, just a few blocks away from the nightlife hubbub is the omnipresent Tribune Tower, illuminating the skyline night after night with its neon sign. Here’s a look at the landmark that has stood as Oakland’s emblem for nearly a century.

The building before the tower

Before the Tribune Tower came into existence, there was the adjoining six-story Tribune Building that dates back to 1906. The building was originally erected for The John Breuner Furniture Company as a showroom and store to provide furniture as people were rebuilding their lives and homes after the destruction of 1906 San Francisco earthquake. Eventually, the furniture company relocated, and the Oakland Tribune newspaper publisher Joseph Russell Knowland seized the opportunity to turn the vacated location into a top grade newsroom.

Knowland’s vision also included a new addition: a tower inspired by the campanile of Saint Mark’s Basilica in Venice, Italy. Knowland commissioned architect Edward T. Foulkes to design it. Using French and Italian influences, including Renaissance, Baroque, and Spanish colonial style ornamentation, the tower was completed in 1924, at a time when skyscraper construction was taking off all across the nation. Standing at over 300 feet tall and 22 stories high, the Tribune Tower was heralded as the tallest skyscraper in the East Bay. 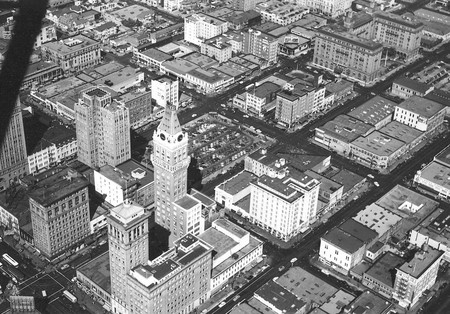 The Tribune Tower reached new heights of national fame even before construction was completed. In 1923, Harry Houdini, an illusionist and stunt performer who was known for his dramatic feats of escape, broke free from his straightjacket while dangling from the ninth story of the tower. Media coverage ensued, making history for both Houdini and the tower itself.

Hot off the press

Once the addition of the tower was completed, its image was emblazoned in the masthead of the Oakland Tribune newspaper for the rest of its time in publication. The tower became the symbol for both the newspaper as well as the City of Oakland. However, the newsroom and printing presses only occupied the six-story building, while the iconic tower housed private residences and the paper’s executive offices. Most notably, it was also home to the radio station KLX on the 20th floor for over three decades.

In 1989, the 6.9 magnitude Loma Prieta earthquake rattled the Bay Area. The Oakland Tribune’s photojournalists captured the aftermath of the big quake amidst the rubble and chaos of collapsed buildings and structures. It earned them a Pulitzer Prize in Spot News Photography, their second one in the category of photojournalism since 1950. Due to the extensive damages to the Tribune Tower resulting from the earthquake, the newspaper temporarily relocated to Jack London Square. The Tribune Building and Tower were left abandoned and wouldn’t reopen for nearly a decade, after renovations and repairs were completed. 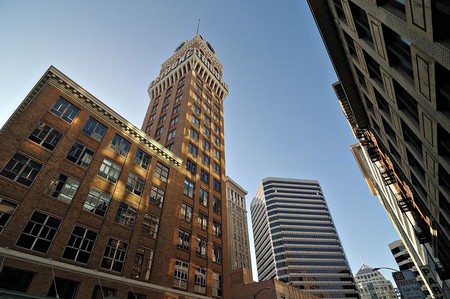 The 11-foot tall neon letters that spell ‘Tribune’ still shine brightly, thanks to Bay Area artist and Burning Man founder, John Law. He started working in the tower in the 1980s as a neon sign technician. A fearless artist with a penchant for climbing buildings, bridges, and other structures, he was the perfect candidate to scale the terrifying heights of the tower. After damages from the Loma Prieta earthquake, Law didn’t return to the tower again until 1996. Now, his office is located in the rafters of the 22nd floor, the very top of the Tribune Tower. Like a modern day Houdini, Law dangles outside the tower a few times a year for routine maintenance, ensuring that the neon signage and clock arms remain in order.

The Tribune Tower has remained a constant throughout various events in the 20th century. Despite the Tribune paper going out of business, various ownerships, and the changing of tenants, the tower has remained a persistent presence overlooking the city. Some things have remained the same: ‘Oakland Tribune’ written in old English script still adorns the imposing edifice’s main entrance, and the tower’s outward appearance has been preserved despite being almost a century old. Nowadays, people gather over food and drinks at Tribune Tavern on the ground level where the newsroom once was. The green roofed tower will continue to preside over the city like a stoic guardian, the clock still keeping perfect time for many years to come. 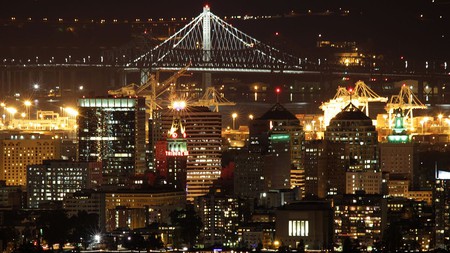