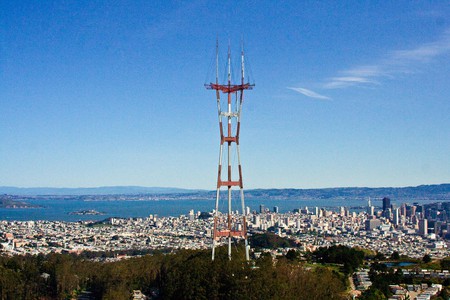 Sutro Tower with a view of the Bay © Matt Biddulph/Flickr

Perched up on a hill between Twin Peaks and Mount Sutro, Sutro Tower overlooks the beautiful city of San Francisco. This prominent feature of the city is as useful as it is beautiful, as it transmits television and radio signals through the peninsula. Check out Culture Trip’s brief guide to San Francisco’s Sutro Tower.

Before Sutro Tower was built in 1973, San Francisco had terrible television reception. Arguably, it was the worst of any major city in America. A good signal required a clear line of sight from a station’s broadcast tower to a house’s television antenna, and the vast hills that the city is known for made this difficult. The solution was to build a giant tower on the top of a hill so it could broadcast signal to the homes throughout the city. 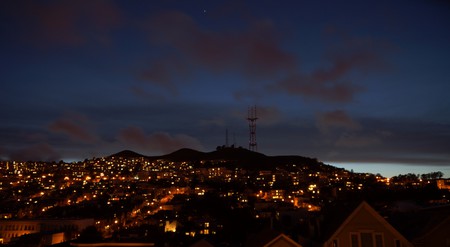 However, Sutro Tower wasn’t always a beloved monument. Despite the fact that their television reception would improve greatly, residents of the city had concerns over safety, property values, and the effect the tall tower would have on the city’s skyline.

One of the largest opponents of the tower was the San Francisco Chronicle. They argued that it wasn’t a wise decision to place the tower so close to reservoirs, an elementary school, and hundreds of homes. The newspaper would rather have the tower placed on San Bruno Mountain, closer to their television station. The Federal Aviation Authority rejected that location, stating it was unsafe because it would be too close to the airport. Shortly after in 1966, the San Francisco Planning Commission approved the site at Mount Sutro. 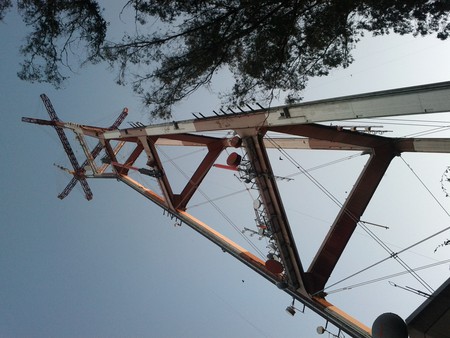 Close up of the structure | © thornet_/Flickr

Creation Of The Tower

The original design plan of the tower was golden in hue, and even had a restaurant at the top, much like Seattle‘s Space Needle. Obviously these plans didn’t make it to construction. The design would undergo a complete transformation before being built, changing both the shape and color of the structure.

Only authorized employees and maintenance workers are allowed on the grounds near the tower, so the restaurant was scrapped, along with the golden shade of paint. Aviation regulations required it to be painted in alternating red and white stripes–the iconic color scheme we know today–, in order to prevent plane collisions. The changes to make it more skeletal and tapered in the center were purely aesthetic, a decision made just to make it more striking.

Construction began in 1971, and on July 4, 1973, Sutro Tower had broadcast its first signal. Shortly after construction was finished, engineers noticed that strong winds caused the antennas to sway, so they added cables for extra stability and security. Unfortunately the wind also rushed through the cables, creating loud sounds similar to a harp. The cables have since been redesigned and replaced, and are now much quieter. 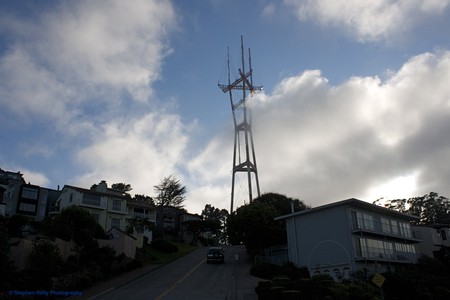 While it’s true that not everyone loves Sutro Tower today, it has managed to nestle its way into the hearts of most Bay Area residents. It has been featured in local art, television shows, and movies as one of the icons of the city. On a clear day, it can be seen as far as the hills of the East Bay. Even when it’s foggy, the top prongs of the tower can be seen peeking out of the clouds, reaching up to the blue sky above San Francisco.