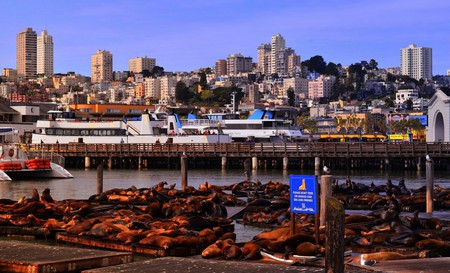 If you have ever visited San Francisco, you’ve probably heard of Pier 39. Pier 39 is the most popular tourist destination in the city, consisting of a shopping center, an entertainment complex, a selection of restaurants and gorgeous views of the water that surrounds San Francisco. Read on to get to know the history of this attraction.

Pier 39 first began development in August 1977, thanks to the entrepreneur Warren Simmons. Construction was completed throughout 1978, and the pier officially opened on October 4th of that year. At its opening, the pier’s attractions included 50 stores, 23 restaurants, a diving pool and street performers. A few of the initial restaurants are still active today, including Pier Market Seafood Restaurant, Eagle Café and Swiss Louis Italian & Seafood Restaurant. 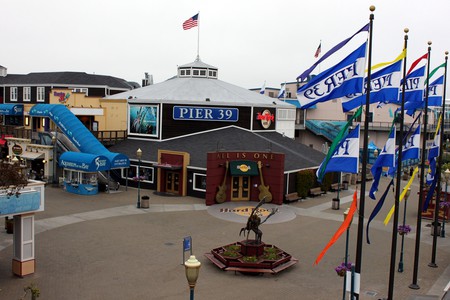 Over the years, more attractions were gradually added. In 1979 the Blue & Gold Fleet began hosting Bay Cruises. Four years later, the diving pool was removed to make room for a Venetian Carousel, which would be replaced in 2008 with the two-story handmade Italian carousel that remains standing today. In 1996, the aquarium Underwater World was opened, which would go on to become the Aquarium of the Bay. By 2002, the Riptide Arcade was added with over 100 games, which would later become Players Sports Grill & Arcade. Later, Magowan’s Infinite Mirror Maze was opened in 2009, followed by the Musical Stairs in 2013 and 7D Experience in 2014. Restaurants were added over the years, as well, including Bubba Gump Shrimp Co. in 1996, Crab House in 1998, Hard Rock Café in 2002 and, most prominently, Forbes Island in 1999, which remains the only man-made floating island restaurant in the world today. 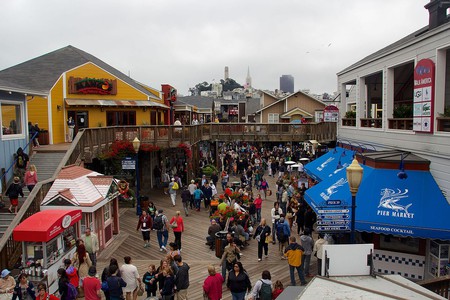 One of the most recognizable features of Pier 39 is the sea lions it attracts. The sea lions first began arriving at the docks around the pier in January 1990, drawing both local and international attention. The sea lion population began to grow over the years, reaching peak numbers in November 2009 when the population was counted to be 1,701. As a result, the city added six new floats to the docks to make room for more sea lions. A few years later, the Sea Lion Center opened at Pier 39, offering visitors a variety of resources to help them learn about California sea lions. 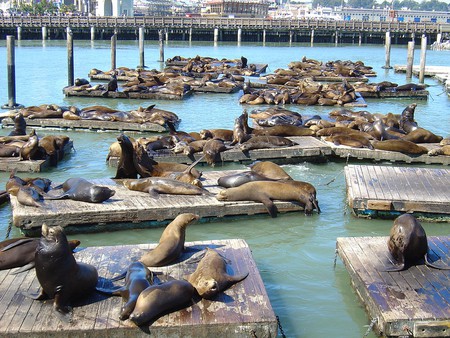