Warm summer air, the smell of hot dogs in the distance, and a nice cold beer in your hand all set to the soothing sounds of 50,000 people cheering. This magic can only mean one thing: it’s baseball season. If you’re celebrating America’s pastime in Los Angeles, the scene for this outstanding game is set in Dodger Stadium. It can be easy to forget while watching the Dodgers in the quest to a World Series title, that the stadium the team calls home has a long history itself. This herculean marvel set among the Elysian Hills almost didn’t even happen. Grab some peanuts and crackerjacks and take yourself out to the history of Dodger Stadium. 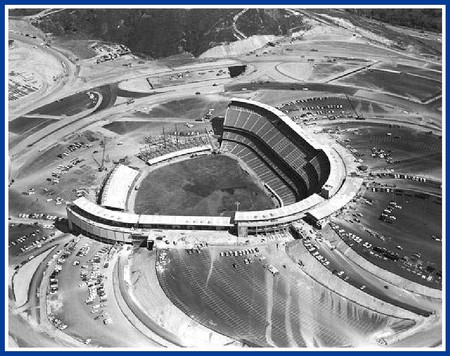 The history of the stadium starts with Dodger president Walter O’Malley in Brooklyn, New York, in 1957. O’Malley was campaigning for a new stadium to be built in New York for his Brooklyn baseball team. After terms could not be agreed upon, O’Malley made the unprecedented move to California. O’Malley’s vision for a baseball park happened to align with Los Angeles County Supervisor Kenneth Hahn looking to scout potential teams for Los Angeles, since the city didn’t have a major league sports team of its own. One of those teams was the Brooklyn Dodgers. Owner O’Malley struck a deal with Los Angeles officials, acquired the minor league Los Angeles Angels and its small ballpark with the promise of a new stadium to be built on land from the Chavez Ravine.

Back in Los Angeles, things were changing in the constantly expanding city, especially the acquisition of land. The Chavez Ravine had undergone a slew of changes over several decades displacing many residents. During the 1950s, as a result of the Federal Housing Act of 1949, the location of the stadium was originally commissioned to be turned into a housing project. The land was originally going to hold housing units, schools, and a college.

Before construction was set to begin, the political climate changed with the election of Norris Poulson as mayor in 1953. The city purchased the Chavez Ravine back from the Federal Housing Authority for a reduced rate under the agreement that the land be used to benefit the public. On June 3, 1958, Los Angeles voters approved a ‘Taxpayers Committee for Yes on Baseball’ referendum, and the Dodgers were able to acquire 352 acres of the Ravine. During construction from 1958-1961, the team played at the Los Angeles Memorial Coliseum.

Dodger Stadium was the first Major League Baseball stadium since the original Yankee Stadium to be built entirely on private financing. Building the colossal stadium in the Elysian Hills just a few miles from downtown was no easy feat given the challenging terrain. Construction began on September 17, 1959. The stadium was designed in part by O’Malley and by the New York-based architect and civil engineer Emil Praeger with some support of Los Angeles-based Edward Fickett. The stadium was designed so each entry was at a grade from the Top Deck down to the Field Level seats. The style and color, which were due to Fickett, gave the building the uniquely Southern California 1960s ‘modern’ style.

In terms of construction, they had to move mountains. Over the course of the three-year building construction, workers shifted eight million cubic yards of earth and rock once known at the Stone Quarry Hills. Modern-day technology such as earthmovers flattened hills and dug through the rough terrain. At the highest point of 726 feet, referred to as Mount Lookout or Silverwood Hill, they severed the peak and carved an amphitheater into the mountainside to serve as the stadium’s foundation. The work only increased from there. The construction of the 124-foot grandstand required 40,000 cubic yards of concrete, 78 precast frames, and over 13 million pounds of reinforced steel. Many old buildings and structures were affected by the erection of the impressive stadium into the hillside. A local elementary school (Palo Verde) was literally buried and still sits beneath the parking lot northwest of third base. The stadium was also designed to be expandable to 85,000 seats, but that has never been pursued. In the end, the total cost of the stadium was in the ballpark of $23 million. 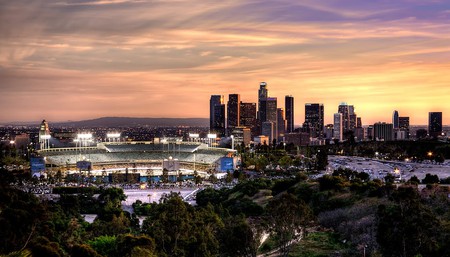 The park opened on schedule on April 10, 1962 to 52,564 fans who came to marvel at the stadium and watch the first game. To this day, it is the third oldest continually used park in all of Major League Baseball and is known as one of the most picturesque places to play. The hard work payed off, creating views that overlooked downtown LA to the south and the San Gabriel mountains to the north.

The Dodgers have gone on to win four World Championships, and the park has hosted eight World Series. The park has also seen a number of perfect games, no hitters, and musical performances such as The Beatles, Michael Jackson, and Elton John. Dodger Stadium continues to be an immaculate ballpark that has undergone renovations to usher the park into the modern world with updated seating, WIFI, and a new scoreboard over the years. The stadium has an incredible ability to adapt to the ever-changing landscape of Los Angeles and new technologies, but remains true to its traditional roots as one of America’s oldest ballparks. Much like the Chavez Ravine, Dodger Stadium will weather any changes, remain a home for the Dodgers, and a beautiful part of the Los Angeles landscape.