A Brief History Of Anti-Chinese Rhetoric In California

Famous Spanish-American intellectual George Santayana once said, ‘Those who cannot remember the past are condemned to repeat it.’ Far too often, the general American population seems apathetic to the historical struggles of many of its most loyal citizens. One of the most criminally forgotten periods in American history is the vast legal and extralegal racism that many Chinese Americans faced when they immigrated to the ‘country of the free.’

The Gold Rush of 1848 is often seen as the catalyst for the development and population boom that singlehandedly created America’s west coast. With the prospect of wealth and stability, people flocked from all over the globe to get their own piece of the pie. The declining power of the Qing Dynasty and the brutal Taiping Rebellion that claimed over 20 million Chinese lives led many young Chinese men to take their chances in America. This initial wave was originally seen as a blessing to the wealthy white elite, as the Chinese workers would often work for lower wages and in worse conditions. Although there are over fifty different ethnic groups in China, the new immigrants were often called ‘Celestials’ or ‘Chinamen,’ a somewhat derogatory mixture of terms that was common throughout the 19th and 20th centuries. 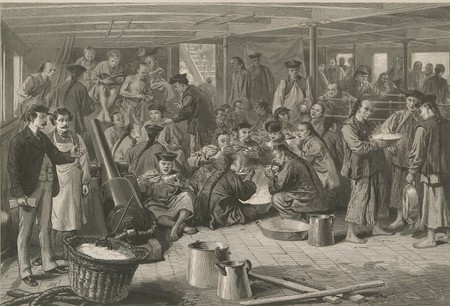 Chinese emigration to America: Sketch on board the steam-ship Alaska, bound for San Francisco. From ‘Views of Chinese’ published in The Graphic and Harper’s Weekly. April 29, 1876. | © The Graphic/Harpers Weekly/Public Domain

One of the first major issues of contention between whites and Chinese was when Chinese workers took over primary construction of the American Transcontinental Railroad. This massive undertaking was intended to connect the western and eastern seaboards. Although the railroad companies initially employed many white workers, they soon found that the Chinese would work as a cheap, expendable labor force. These people often worked in deplorable conditions and took the most dangerous jobs. Many white immigrant workers took issue with the Chinese taking their jobs, and this initial wave of resentment led to conflicts between the immigrant groups. Complaints from white workers created acts like the Anti-Coolie Act of 1862, which imposed a monthly tax on Chinese workers who were barely making enough money to send home to their families. 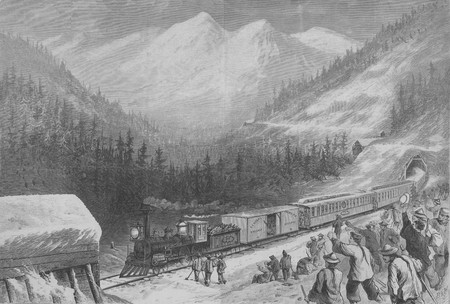 ‘Not a Chinaman’s Chance’ and The Yellow Peril

The phrase ‘Not a Chinaman’s Chance’ (or ‘Not a Chinaman’s Chance in Hell’) signified the negative sentiment towards Chinese workers in the West Coast. Although the origin of the phrase is in contention, many people believe it came from a particularly dangerous job on the railroad where Chinese workers used unstable explosives to tunnel and create holes in cliff faces. Oftentimes, the workers were lowered in flimsy baskets and had to place explosives to create holes for the tracks. Unfortunately, if they weren’t pulled up quickly enough, they were killed by the ensuing nitroglycerin blast. Soon, the Yellow Peril — the belief that Chinese workers were damaging the fabric of white society — spread throughout America and led to racial conflicts which culminated in the 1882 Chinese Exclusion Act. 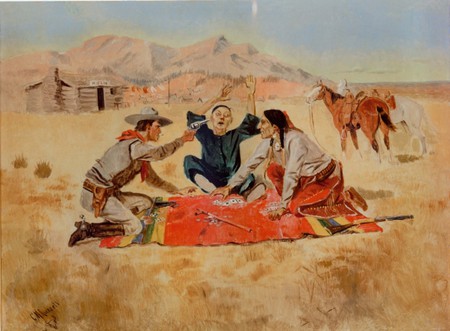 Signed by Chester A. Arthur on May 6th, 1882, The Chinese Exclusion Act prohibited all immigration pertaining to Chinese laborers. One of the most drastic (and forgotten) immigration acts in American history, this act essentially criminalized an entire nationality. Chinese Americans in the west had already faced extreme discrimination and now were unable to bring their wives or family members to the United States. The law also made Chinese workers permanent aliens who legally could not become American citizens. This horrendous act wasn’t repealed until 1943 and essentially froze the Chinese American community. 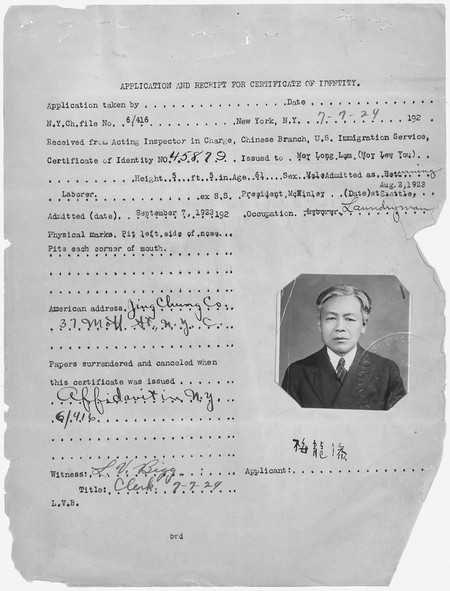 The other hated nationality at the time was the Irish; immigrants from Ireland flooded the East Coast. Many Christian Anglo-Saxon Americans felt that the Yellow Peril (Or Terror) would envelop the West Coast while the Catholic Irish horde would destroy the civility that the East prided itself on. The strange cartoon below shows a belligerent Irish immigrant yelling at Uncle Sam and Columbia in a boarding house filled with various other immigrants. Next to him is a Chinese worker who is attempting to sleep. 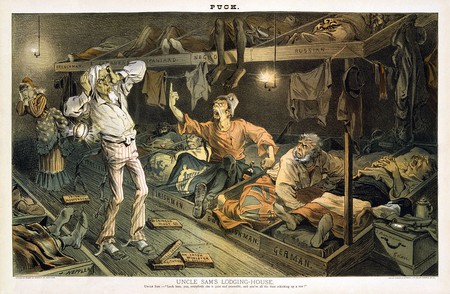 A common way to sway public opinion before radio or the television were political cartoons. These cartoons were infamous for their extremely racist depiction of Chinese Americans as savages who were coming to destroy America. These early forms of propaganda were commonly used to create unnecessary tension. Although political cartoons have certainly advanced from these racist beginnings, it is interesting to see how they often started as works to slander or attack certain nationalities or ethnic groups. 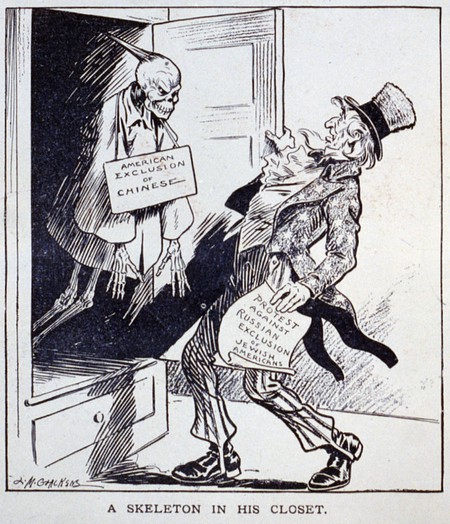 Editorial cartoon ‘A Skeleton in His Closet.’ | © L.M. Glackens/Public Domain

To legally immigrate, Chinese citizens were forced to take one of three major routes. They could attempt to prove that they weren’t laborers and in fact part of the Chinese middle or upper class. This particular route was often taken by members of the Chinese elite or their personal household servants. The second route available was to prove that they had relatives in America. This path was complex, as officials made it extremely hard to prove. Finally, some Chinese peoples attempted to illegally immigrate from Canada or Mexico. This wave of illegal immigration actually created some of the first major border forces, who were set up to crack down on illegal Chinese immigrants. 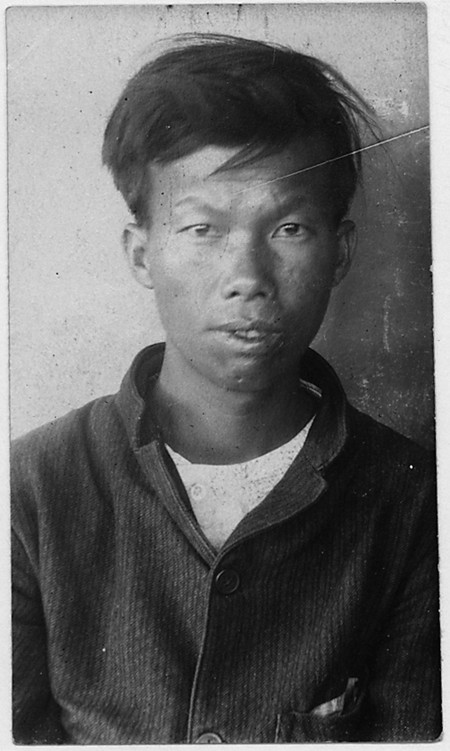 The case file from which this document originates pertains to the arrest and trial of Francisco and Juan Rios and Antonio Solis for smuggling Chinese nationals across the US-Mexico border @ U.S. National Archives and Records Administration/Wikipedia Commons

The Satterfield Cartoon (featured at the top of this article) is unique in the sense that it actually shows Chinese people treating white Americans in the same way that white Americans treated Chinese people. This remarkable cartoon shows how political cartoons could be used to actually help a marginalized ethnic/national group.

One of the major groups that pushed against Chinese workers was the powerful Workingmen’s Party of California, which advocated extreme measures against Chinese immigrants. Founded by Denis Kearney in the 1870s, this group was famous for its slogan ‘The Chinese Must Go!’ and was quite popular among white, working class Americans in California. 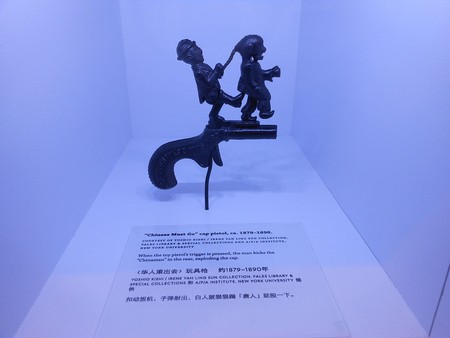 One of the major groups that pushed for repeals against Chinese workers was the powerful Workingmen’s Party of California, which advocated extreme measures against Chinese immigrants @ Alexisrael/Wikipedia Commons

From the 1886 Seattle Riots to the Rock Springs Massacre, the Chinese American population faced countless race riots driven by white workers. Oftentimes extremely violent and illegal, these riots pushed out existing Chinese workers and openly terrorized Chinese Americans. In 1871 the so-called ‘Chinese Massacre’ occurred in the heart of Los Angeles; 18 Chinese immigrants were systematically lynched by a mob of around 500 white Americans. Even today this still remains one of largest mass lynching in American history. 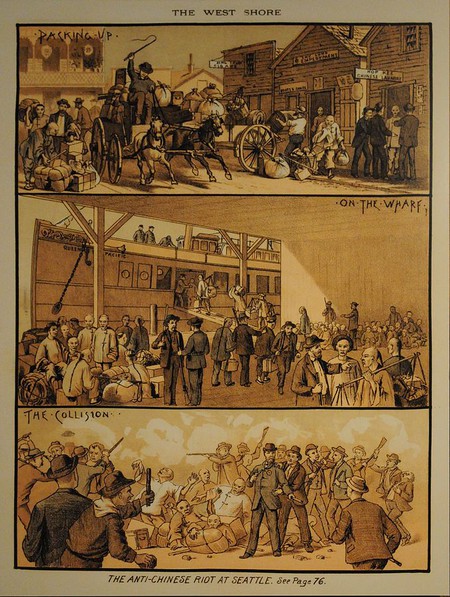 Artist’s conception of the 1886 anti-Chinese riot in Seattle. The three panels are entitled, respectively ‘Packing Up,’ ‘On the Wharf,’ and ‘The Collision’ | © Joe Mabel/Public Domain

Since its establishment in 1848, San Francisco’s Chinatown has become one of the city’s most important symbols. Historically, it is the oldest Chinatown in American, and it is still one of the largest communities of Asians outside of continental Asia. Although many tourists come every year to this colorful neighborhood, very few know and realize the hardships that Chinese Americans faced in the past. From race riots to legalized racism, Chinese Americans have struggled to cement themselves in America for over a hundred years. Hopefully, with a new understanding of the open racism that they faced on the west coast, people can avoid the mistakes of the past and move on as a unified nation working to better itself for all its citizens.

This map mirrors the bias against the Chinese in California. It was published as part of an official report of a Special Committee established by the San Francisco Board of Supervisors "on the Condition of the Chinese Quarter" @ Willard B. Farwell/Public Domain

This map mirrors the bias against the Chinese in California. It was published as part of an official report of a Special Committee established by the San Francisco Board of Supervisors “on the Condition of the Chinese Quarter” © Willard B. Farwell/Public Domain