9 Quotes That Tap The Love/Hate Mythology Of LA 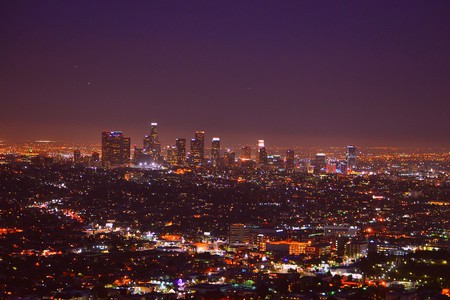 While the reputation of Los Angeles as ‘the city that dreams are made of’ continues to attract those seeking fame and fortune, the city has a dark shadow that is equally revered. From Kerouac to Didion, many authors have cast Los Angeles as a complicated and sordid urban muse, finding motifs in its notorious flaws: the smog as human folly; the plastic denizens as superficiality; the rising heat as inevitable apocalypse; the sprawling concrete as impenetrable loneliness. These nine quotes illustrate a brand of self-loathing that permeates the native mythology. In part, to love Los Angeles is to love to hate it too.

‘The old folk from Indiana and Iowa and Illinois, from Boston and Kansas City and Des Moines, they sold their homes and their stores, and they came here by train and by automobile to the land of sunshine, to die in the sun, with just enough money to live until the sun killed them, tore themselves out by the roots in their last days, deserted the smug prosperity of Kansas City and Chicago and Peoria to find a place in the sun. And when they got here they found that other and greater thieves had already taken possession, that even the sun belonged to the others; Smith and Jones and Parker, druggist, banker, baker, dust of Chicago and Cincinnati and Cleveland on their shoes, doomed to die in the sun, a few dollars in the bank, enough to subscribe to the Los Angeles Times, enough to keep alive the illusion that this was paradise, that their little papier-mâché homes were castles.’ 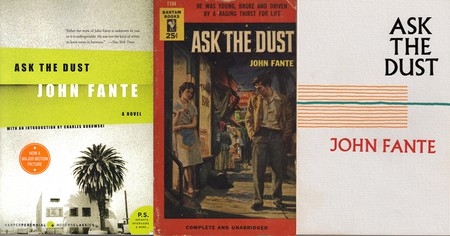 ‘I come to a red light, tempted to go through it, then stop once I see a billboard sign that I don’t remember seeing and I look up at it. All it says is ‘Disappear Here’ and even though it’s probably an ad for some resort, it still freaks me out a little and I step on the gas really hard and the car screeches as I leave the light.’ 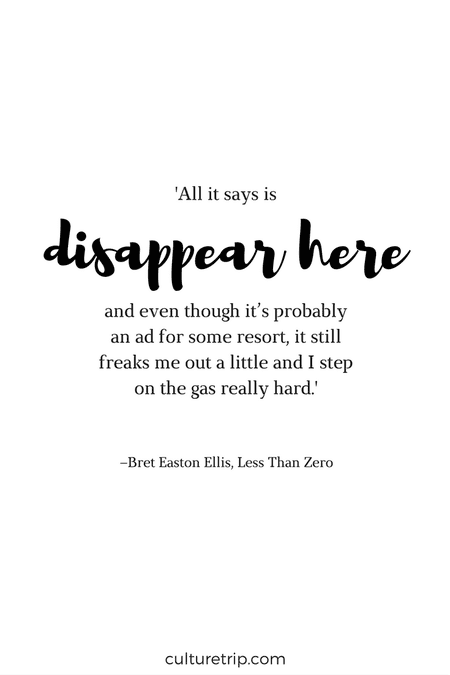 ‘An afternoon drive from Los Angeles will take you up into the high mountains, where eagles circle above the forests and the cold blue lakes, or out over the Mojave Desert, with its weird vegetation and immense vistas. Not very far away are Death Valley, and Yosemite, and Sequoia Forest with its giant trees which were growing long before the Parthenon was built; they are the oldest living things in the world. One should visit such places often, and be conscious, in the midst of the city, of their surrounding presence. For this is the real nature of California and the secret of its fascination; this untamed, undomesticated, aloof, prehistoric landscape which relentlessly reminds the traveller of his human condition and the circumstances of his tenure upon the earth.’

‘I could hear everything, together with the hum of my hotel neon. I never felt sadder in my life. LA is the loneliest and most brutal of American cities; New York gets god-awful cold in the winter but there’s a feeling of wacky comradeship somewhere in some streets. LA is a jungle.’

–Jack Kerouac, On The Road 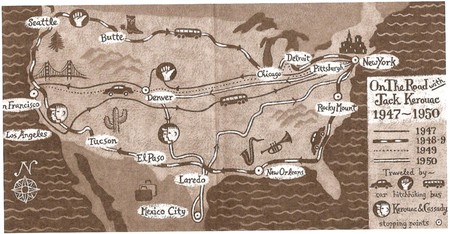 Jack Kerouac, On the road | Courtesy of Viking Press

‘The setting sun burned the sky pink and orange in the same bright hues as surfers’ bathing suits. It was beautiful deception, Bosch thought, as he drove north on the Hollywood Freeway to home. Sunsets did that here. Made you forget it was the smog that made their colors so brilliant, that behind every pretty picture there could be an ugly story.’

‘Los Angeles is a town where status is all and status is only given to success. Dukes and millionaires and playboys by the dozen may arrive and be glad-handed for a time, but they are unwise if they choose to live there because the town is, perhaps even creditably, committed to recognizing only professional success, and nothing else, to be of lasting value. The burdensome obligation imposed on all its inhabitants is, therefore to present themselves as successes, because otherwise they forfeit their right to respect in that environment… There is no place in that town for the ‘interesting failure’ or for anyone who is not determined on a life that will be shaped in a upward-heading curve.’

‘In Los Angeles, everything is 100% organic, except the people.’

‘If Los Angeles is a woman reclining billboard model with collagen-puffed lips and silicone-inflated breasts, a woman in a magenta convertible with heart-shaped sunglasses and cotton candy hair; if Los Angeles is this woman, then the San Fernando Valley is her teenybopper sister. The teenybopper sister snaps bug stretchy pink bubbles over her tongue and checks her lipgloss in the rearview mirror, . . . Teeny plays the radio too loud and bites her nails, wondering if the glitter polish will poison her.’

–Francesca Lia Block, I Was A Teenage Fairy

‘It is hard for people who have not lived in Los Angeles to realize how radically the Santa Ana figures in the local imagination. The city burning is Los Angeles’s deepest image of itself; Nathanael West perceived that in The Day of the Locust; and at the time of the 1965 Watts riots what struck the imagination most indelibly were the fires. For days one could drive the Harbor Freeway and see the city on fire, just as we had always known it would be in the end. Los Angeles weather is the weather of catastrophe, of apocalypse, and, just as the reliably long and bitter winters of New England determine the way life is lived there, so the violence and the unpredictability of the Santa Ana affect the entire quality of life in Los Angeles, accentuate its impermanence, its unreliability. The wind shows us how close to the edge we are.’ 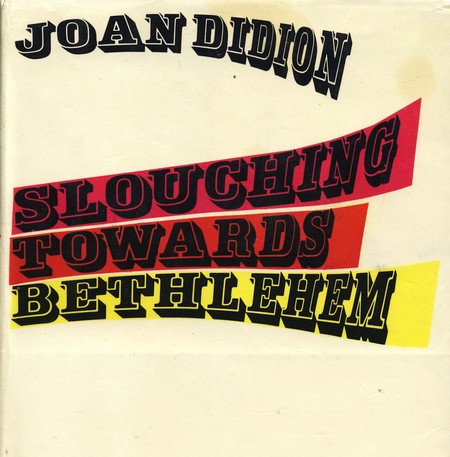