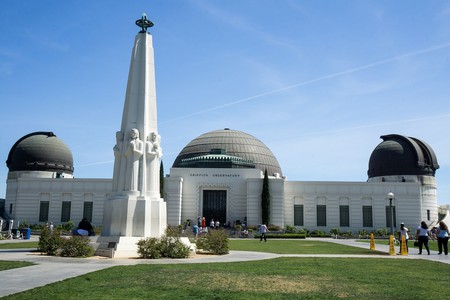 LA’s Griffith Observatory deserves a star on the Hollywood Walk of Fame at this point.

Griffith Observatory is home to the best views in Los Angeles from every foreseeable direction. Looking up, you’ll usually find a galactic ocean (or, at very least, of a video about the galaxy in the observatory’s impressive planetarium). Looking down is equally thrilling—from the corners and balconies, you feel as though you’re standing on top of the world (or, at the very least, the world of Hollywood). And in case you dare look straight and around you, you’ll catch some of the most iconic architecture in LA.

Several scenes from the 1955 classic Rebel Without a Cause were filmed at Griffith Observatory. There’s the infamous knife fight scene and the more obvious planetarium scene, as well as the film’s iconic final shot. Griffith plays such a big part in the movie, in fact, that it’s practically a character in itself. The sprawling views of Los Angeles from the observatory also create a memorable backdrop to the story.

La La Land fantasized Los Angeles to make it seem like an even more magical city than reality (the film somehow managed to romanticize rush hour traffic). Perhaps the most enchanting scene of all is the sequence in Griffith Observatory, where the two feature characters find themselves looking up at the planetarium and dancing among the stars. It’s enough to give even the least romantic person chills.

As a bonus for fans of Emma Stone and Ryan Gosling appearing on screen together, here’s a deleted scene from 2013’s Gangster Squad that also had the actors getting romantic at the observatory. It’s almost easy to presume from their work together that the Griffith Observatory is the duo’s own personal third-character narrative.

Nothing says science fiction like an iconic building dedicated to the study of the stars and the mysteries of the cosmos, right? Well, Griffith Observatory can say “science fiction” a little louder with The Terminator on its steps. In 1984, Arnold Schwarzenegger made his very naked first appearance as the Terminator at Griffith Observatory. Not only does the location tie in thematically with the film, it also gave Arnold’s robot alter ego a chance to literally survey the city before beginning his search for Sarah Connor.

Griffith Observatory made another sci-fi appearance in 2007’s Transformers. The observatory served as the backdrop for the “Autobots, roll out” scene in the first movie in the blockbuster franchise. Since the transformers themselves are CGI, this was probably a fairly low-key shoot for the observatory.

In Jim Carrey’s comedy, Yes Man, his character’s life is transformed when he starts saying yes to every request and opportunity that comes his way; the Griffith Observatory makes yet another cameo. Zooey Deschanel (another Griffith loyalist) plays a woman who runs a photography and jogging group and she invites Carrey’s character to try it out. They start from Griffith Observatory and their jog takes them down the trails at Griffith Park. It’s a beautiful scene and accurate to LA living (Griffith Park is home to a lot of meet-up groups for joggers and hikers).

In the 2003 sequel to Charlie’s Angels, Griffith Observatory is the setting for the pivotal scene when the modern Angels (played by Lucy Liu, Cameron Diaz, and Drew Barrymore) learn that the film’s villain, Madison Lee (played by Demi Moore), is actually a former Angel herself—a Fallen Angel, if you will.

In 1991’s The Rocketeer, the Griffith Observatory is the site of a major showdown between the Rocketeer and the film’s villains. The scene gets bonus points for taking place at night, when the observatory (and the view of Los Angeles below) is particularly beautiful.