7 Poems That Capture the Heart of San Francisco 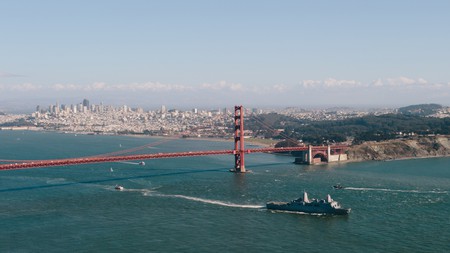 Poetry has a way of getting to the indiscernible truth of a subject and these poems written by famous writers and poets, many of which were integral to the community of San Francisco around the turn of the 19th century, do just that. Some of the poems feature local landmarks belonging to the city, while others include the still ever-present foggy mornings and windy days. The San Francisco featured in all of these decade-old poems is still recognizable to the present day citizen of the city, and yet completely new through the lens of these poems.

‘The City That Will Not Repent’ by Vachel Lindsay

There lies new San Francisco,
Sea-maid in purple dressed,
Wearing a dancer’s girdle
All to inflame desire:
Scorning her days of sackcloth,
Scorning her cleansing fire.

See, like a burning city
Sets now the red sun’s dome.
See, mystic firebrands sparkle
There on each store and home.

The city personified as a person, or a sea-maid in this case, is one of the writing techniques Vachel Lindsay uses to get to the heart of San Francisco. Vachel Lindsay, considered the inventor of signing poetry, wrote this poem of the city that will not repent, using God’s love and hate for this city to give a complicated view of what San Francisco is.

I would speak honestly and of a full heart;
I would speak surely for the tale is short,
And the soul’s remorseless catalogue
Assumes its quick and piteous sum.
Think you, hungry is the city in the fog
Where now the darkened piles resume
Their framed and frozen prayer
Articulate and shafted in the stone
Against the void and absolute air.

This dark and relatively solemn poem written by Robert Penn Warren details a night in the city, the looming eerie vibe as well as mysterious beauty that can be found. The poet was active during the early to mid-20th century and was a literary critic who was a contributing founder of New Criticism.

‘The City By the Sea – San Francisco’ by George Sterling

Ever the winds of morning
Are cool from the flashing sea –
Flowing swift from our ocean,
Till the fog-dunes crumble and flee.

San Francisco native poet George Sterling was active from the 1890s through to the 1920s, which is when he wrote this poem about San Francisco going from dusk to dawn, and the beauty of the city during its voyage from night to day.

‘The Golden Gate’ by Edward Pollock

The air is chill, and the day grows late,
And the clouds come in through the Golden Gate:
Phantom fleets they seem to me,
From a shoreless and unsounded sea;
Their shadowy spars and misty sails,
Unshattered, have weathered a thousand gales:
Slow wheeling, lo! in squadrons gray,
They part, and hasten along the bay.

This poem focuses mainly on the interactions of the Golden Gate (there was no bridge at the time and, in this instance, the strait is being referenced) and its relationship with the natural world around it. The poet Edward Pollock, best known for ‘The Parting Hour,’ wrote this poem during the 19th century.

‘At the Golden Gate’ by Henry Morford

Years, years of waiting, while in shapes terrific
Have loomed the obstacles that held me back;
And now I see, at length, the broad Pacific
Rolling far westward in the sunset’s track.

This poem, filled with the warmth of day and the hope inspired by seeing the Golden Gate Strait, was written by Henry Morford, a travel writer who focuses on other types of writing as well. This poem, seemingly imbued with the warmth of the sunlight depicted within its lines, focuses on what a symbol, such as the Golden Gate, can mean to a person.

Fair on your hills, my City,
Fair as the Queen of old,
Supreme in her seven-hilled splendor-
You, from your Gate of Gold,
Facing the orient sunburst,
Swathed in the sunset gleams,
Throned in an ultimate glory,
City of mists and of dreams!

This passionate and vivid poem written by Ina D Coolbrith, a prominent figure in the San Francisco literary community at the turn of the century, paints a beautiful picture of San Francisco, relating the city to royalty with all the implications that come with it.

‘A Legend of the Cliff House, San Francisco’ by Bret Harte

Where the sturdy ocean breeze
Drives the spray of roaring seas
That the Cliff-House balconies
Overlook:

This poem, detailing a wire walker and the viewers watching him, takes place at the famed Cliff House, a well-known restaurant and venue in San Francisco. The events of this poem, as well as the rhyming scheme and the inclusion of ‘legend’ in the title, give this store a tense and yet fantastical rhythm. Bret Harte, the author who penned the poem, was active in the mid to late 19th century and there are many schools in the Bay Area and around the world named after him in his legacy.