Movie Theater General Image © Blondinrikard Fröberg/Flickr
Movie theaters in the Bay Area are trying gimmick after gimmick to lure audiences away from the easy option of home entertainment. Here are a few of the more intriguing examples.

Amusement Park, Park
Century 20 | © Wonderlane/Flickr
Whereas some modern movie theaters try to emulate the home-viewing experience as much as possible, Century Theaters has taken almost the exact opposite approach for their new feature: D-Box seats. Via advance reservation, you can sit in a vibrating seat that will shake you around a little bit during exciting moments. As the herky-jerky lobby demo shows, it’s not going to make you feel like you’re “in the movie” as advertised, but it does add an amusement park ride element to the atmosphere. It’s worth trying at least once, especially for more bombastic films.
More Info
Open In Google Maps
825 Middlefield Road, Centennial, Redwood City, California, 94063, USA
+16507011341
View menu
Visit website
Visit Facebook page
Send an Email
Give us feedback

The Alameda Theater’s Restaurant and Music

Cinema, Theater
Alameda Theater | © Cody and Maureen/Flickr
The worst part about theater food isn’t just that it’s incredibly overpriced — it’s that most of it is just stuff you can get anywhere else, whether it’s candy, hot dogs, or even a sacred cow like buttered popcorn. The same cannot be said for The Alameda Theater, with its in-house restaurant called the Cinema Grill. Not many movie theaters boast all of the modern hits and a restaurant and bar with sliders and local band performances.
More Info
Open In Google Maps
2301 Central Avenue, Alameda, California, 94501, USA
+15107692000
View menu
Visit website
Visit Facebook page
Send an Email
Give us feedback

Camera 3 in San Jose offers innovative arthouse films and innovative patisserie fare from the nearby Psycho Donuts. The aptly-named bakery believes, correctly, that there is no such thing as too many toppings, with donuts covered in frosting, cereal, candies, cookies, and any other number of delicious morsels that create both an unrivaled treat to accompany any movie and a jitter-inducing sugar high. 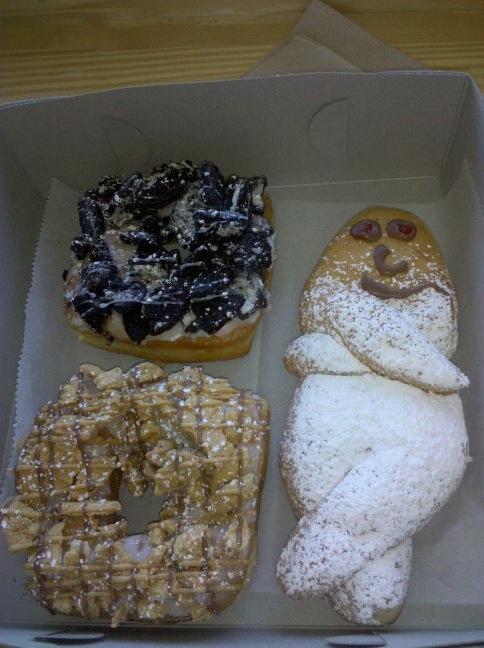 The New Parkway’s Cobbled-Together Everything

Cinema, Theater, Building, Movie Theater
New Parkway | © Sonny Abesamis/Flickr
Oakland’s New Parkway Theater, named in honor of the now-shuttered Parkway Speakeasy, has a misleading name. Eclectic, rather than new, seems like the most apt adjective. The building is an old warehouse converted to showcase a wide variety of films, from newer features to indies and classics. The seating varies dramatically, with options ranging from office recliners and couches to beanbags. The concession stand sells stand-bys like candy and popcorn, but also offers amenities like tofu hoagies, local brews, and pizza. Even the movies are only part of the theater’s offerings, with regular events ranging from comedy to events showcasing local artists. One thing’s for sure: The New Parkway offers something completely and utterly unique for a movie theater.
More Info
Open In Google Maps
474 24th Street, Northgate - Waverly, Oakland, California, 94612, USA
+15106587900
View menu
Visit website
Visit Facebook page
Send an Email
Give us feedback

The Stanford Theatre’s Focus on Days Gone By

Cinema, Movie Theater, Theater, University
With so many theaters trying to fight against the passage of time and recapture the control they used to hold over the motion picture scene, the Stanford Theater’s approach is perhaps the most ironic: they simply refuse to leave the past. Everything about this theater — its modest concession stand that offers small amounts of popcorn, its run-down but still glamorous facade, and its revolving selection of classics from the golden age of cinema — is reminiscent of the origin of the movie theater as a powerful cultural force. Strangely enough, this refusal to adapt to a changing landscape is almost enough to overcome the myriad forces laid against it. When it comes to the work of Humphrey Bogart, James Stewart, and Akira Kurosawa, there’s no better way to watch a movie than in the Stanford Theater with a bag of popcorn.
Looks like it's closed Hours or services may be impacted due to Covid-19
More Info
Open In Google Maps
221 University Avenue, Downtown North, Palo Alto, California, 94301, USA
+16503243700
View menu
Visit website
Visit Facebook page
Send an Email
Give us feedback
Give us feedback