7 of California's Most Epic Bridges 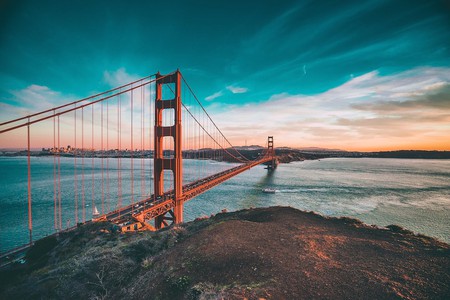 There’s something really exciting about driving, biking, or walking over the architectural wonder that is a significant bridge. California has a number of them, many reaching dizzying heights to connect cities along the coast. The state also boasts one especially gorgeous pedestrian bridge that’s an operational sundial. Here are seven of California’s most epic bridges. 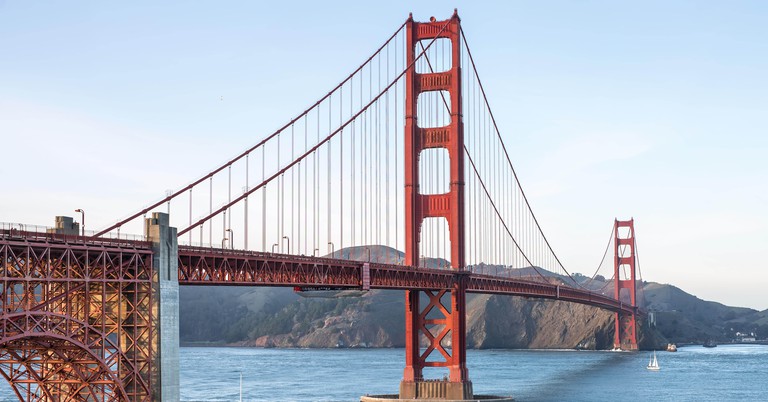 © Andriy Bezuglov / Alamy Stock Photo
Book Now
The Golden Gate Bridge is arguably California’s most iconic, spanning 4,200-feet in length between the San Francisco Bay and the Pacific Ocean. The red, Art Deco bridge opened in 1937, and has since been featured in numerous films, TV shows, magazines, and publications, with pretty much any work set in San Francisco featuring an established shot of the landmark. In the family sitcom Full House, it appears in the opening credits.
Open In Google Maps
Golden Gate Bridge, San Francisco, California, USA
+14159215858
Visit Website
Give us feedback 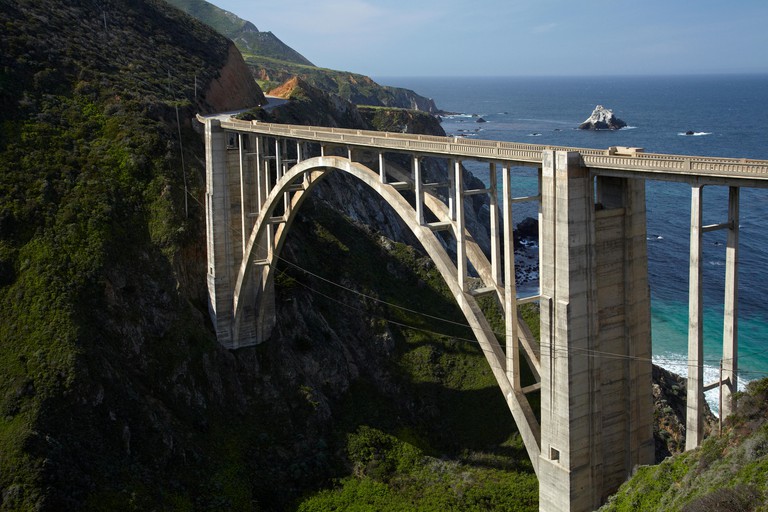 Bixby Creek Bridge, Pacific Coast Highway, Big Sur | © davidwallphoto.com / Alamy Stock Photo
This stunning reinforced concrete bridge opened in 1932, and is frequently photographed and featured in media. It is 714-feet in length and over 260-feet high. When built, it allowed passage for residents of Big Sur, especially during the winter, which often left other roads challenging, if not impassable. Drivers will find it along Highway 1, against the Pacific coast, between Big Sur State Park and Carmel.
Open In Google Maps
California 1, Monterey, California, 93940, USA
Give us feedback 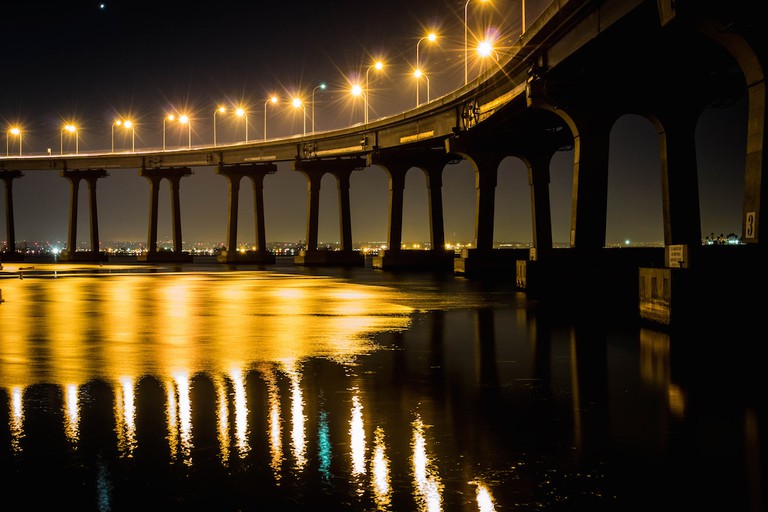 San Diego-Coronado Bridge | © Kenny Chung/Flickr
This bridge towers over the San Diego Bay, connecting San Diego and Coronado. It is 11,179-feet long, and opened in 1969. Its proximity to a U.S. Naval base allows visitors to view ships as they pass, but some of the most interesting art in the San Diego area can be found beneath the bridge. Chicano Park consists of a huge collection of Chicano murals—the largest collection in the world—using the bridge’s pillars as canvas.
Open In Google Maps
San Diego – Coronado Bridge, Coronado, California, USA
Give us feedback 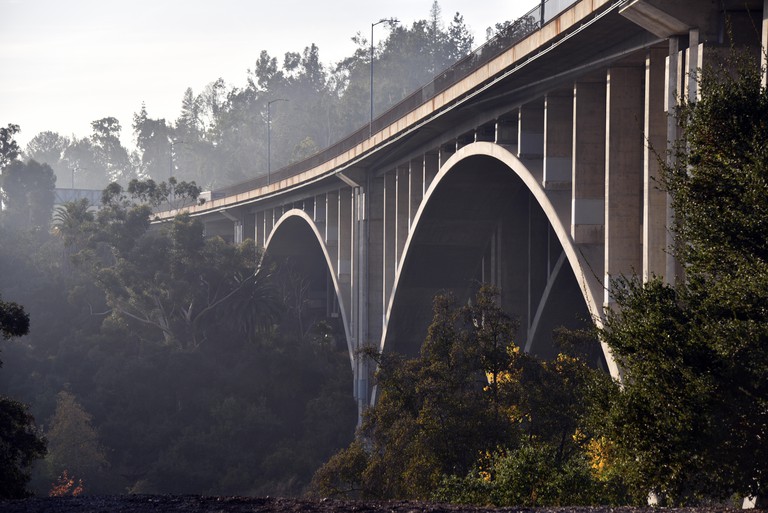 Bridge in Pasadena California known as the suicide bridge | © Mark Stout / Alamy Stock Photo
Built in 1912, the Colorado Street Bridges crosses the Arroyo Seco in Pasadena. It is considered a historic landmark, and is the subject of numerous Los Angeles urban legends and ghost stories, including that of Myrtle Ward who, in 1937, threw her three-year-old daughter from the bridge before jumping herself. The child miraculously survived, some say Ward’s ghost spends her nights searching for her baby.
Open In Google Maps
504 West Colorado Boulevard, South Arroyo, Pasadena, California, 91105, USA
Visit Website
Give us feedback 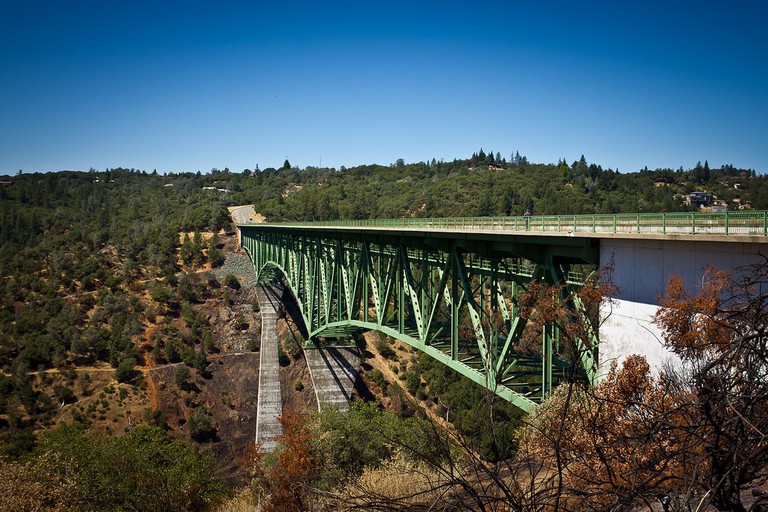 The Sundial Bridge is particularly striking. Accessible to bikes and pedestrians only, the bridge allows guests of Redding’s Turtle Bay Exploration Park (one of our top picks for budget-savvy family vacations) to cross the Sacramento River. The name is not a misnomer; this bridge is actually a huge sundial, as the bridge’s support tower also acts as a gnomon. 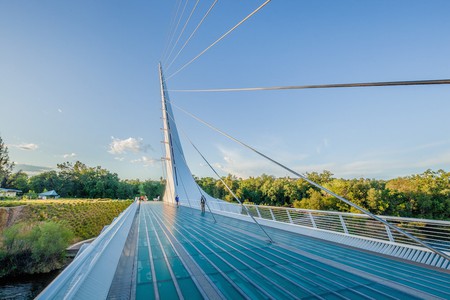 Bridge, Building
Facebook
Email
Twitter
Pinterest
Copy link
Share
Map View
The Oakland Bay Bridge is actually three bridges, which span over the San Francisco Bay to Oakland and San Francisco. Guests might see a light show, designed by artist Leo Villareal, called The Bay Lights. It was installed in 2016, and consists of some 25,000 LED lights that shimmer along a portion of the bridge.
Open In Google Maps
San Francisco – Oakland Bay Bridge, San Francisco, California, USA
Visit Website
Give us feedback
Give us feedback