7 Movies That Were Filmed in LA’s Union Station 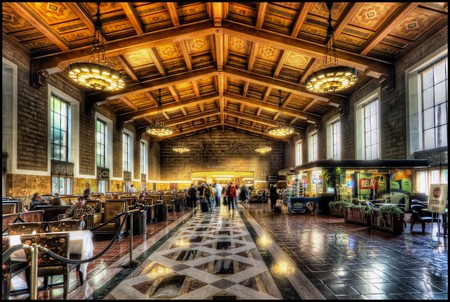 It doesn’t always play a train station, either.

Los Angeles’ Union Station is regarded by many as “the last of the great train stations.” With its Mission Moderne style, Union Station is an architectural stunner—and a place that looks amazing on camera. The train station has appeared in dozens of movies and TV shows over the years. Here are seven of Union’s most iconic appearances.

The famous train station doubled as Crane’s courthouse in 2012’s The Dark Knight Rises in the scene in which Dr. Crane (aka Scarecrow) holds court against Bane’s enemies. The court sequence plays out like a carnival (a very scary, creepy carnival with high stakes) and Union Station served as the perfect backdrop.

One of Union Station’s most memorable onscreen appearances came in 1982’s Blade Runner, in which it stood in for the police station when Deckard is brought in to wrangle the replicants. There’s no mistaking those arches—not that director Ridley Scott took pains to disguise the building, especially since Blade Runner takes place in a future version of Los Angeles.

In Catch Me If You Can, Union Station stands in for Miami Mutual Bank, in the scene where Leonardo DiCaprio’s Frank Abagnale Jr. memorably seduces a bank teller played by Elizabeth Banks. The tiles on the walls gives it away, but otherwise the filmmakers convincingly transformed the train station lobby into a bank. This is a perfect example of Hollywood ingenuity.

Union Station got to play an actual train station in 2003’s Seabiscuit, in the scene when Charles Howard gives a speech before traveling to New York for the match race. Fans have pointed out that, while the scene in the movie takes place in 1938, Union Station didn’t open until a year later. The more you know, right?

Union Station also played a train station (surprisingly few of its roles are actually as a train station) in 2001’s Pearl Harbor. It provides the backdrop for part of Rafe (Ben Affleck) and Evelyn’s (Kate Beckinsale) love story. While Affleck and Beckinsale definitely command the audience’s attention in the scene, Union is unmistakable in the background.

In the Coen Brothers’ film, Hail, Caesar!, Union Station got the true Hollywood treatment when it doubled as a movie studio—the iconic location provided the exteriors for the fictional Capitol Studios. With its gorgeous, iconic architecture, Union Station is a perfect façade for any building that needs a lot of character. Well chosen, Coens.

Union Station got one of its biggest makeovers of all time for 2003’s Charlie’s Angels: Full Throttle, where it served as super villain Madison Lee’s (played by Demi Moore) evil lair. The filmmakers transformed the train station’s old ticket area, turning it into the glam dwelling seen in the film. In this instance, Union Station is far less recognizable than it usually is in movies.