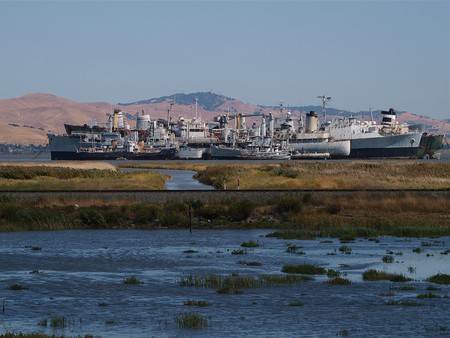 Unbeknownst to many in the Bay Area, a gigantic surplus of steel, armory and weapons was once housed just a few miles from the city of San Francisco. Often called the ‘Mothball Fleet’ or the ‘Ghost Fleet’, the Suisun Bay Reserve Fleet is basically an open-air shipyard run by the United States Maritime Administration. Started in 1946, the shipyard has housed thousands of ships and has created a legacy as one of the largest military holding areas in the United States. In this brief article we will detail seven facts about this fascinating piece of Bay Area history.

Suisun Bay was named after the Suisunes Tribe of Northern California

The Suisunes people (also called Suisun or the ‘People of the West Wind’) were a Native American tribe that lived in the Suisun Marsh region of Northern California. This relatively small tribe survived off a basic diet of acorns, fish and miners lettuce. Their main village, Yulyul, was believed to have been located where Rockville is today. The actual Suisun Marsh is also the largest brackish water marsh on the west coast and supports nearly 80% of the states commercial salmon fisheries by providing regions of water where juvenile salmon can grow and mature. 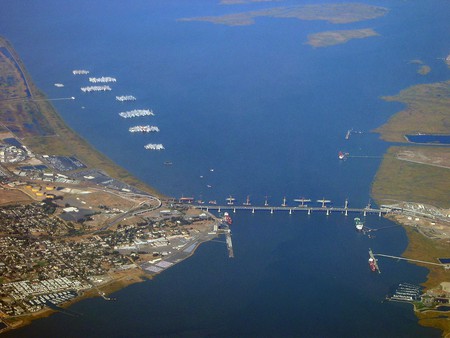 Aerial photo of the Suisun Bay. Benicia to the left, Martinez to the right, and Fairfield/Suisun City to the north @Ryanloney/Wikipedia

Before it moved to Los Angeles in 2011, the historically important USS Iowa was housed in Suisun Bay for ten years

This massive 45,000 ton, 900 foot battleship was commissioned in 1943 and served as one of the most important battleships in the entire United States Navy. In 1943, she ferried Franklin Delano Roosevelt to Algeria on his first leg of a major journey to Tehran where he met Winston Churchill and Joseph Stalin to discuss plans for the war in Europe. (There was even a special Roosevelt bathtub installed for his journey). The Iowa went on to serve the Pacific Fleet in WWII where she shelled the beachheads of Kwajalein and Eniwetok before Allied landings. During the Korean War she bombarded the North Korean coast, and she was finally decommissioned in 1990. She arrived at Suisun Bay in 2001 and stayed there for ten years until she was sailed down to Los Angeles to become a floating museum. 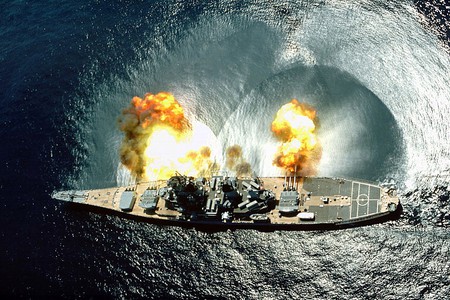 By September 30, 2017, the mothball fleet will be completely dismantled and/or moved due to environmental concerns

Over the years, the Ghost Fleet has been slowly dismantled or shipped to other locations. Today, only a few small ships grace Suisun Bay, which is supposed to be empty in early 2017. Most of the ships have either been sold at auctions or sold for scrap to foreign or domestic buyers. In the terms of settlement regarding the ships in Suisun Bay, there were certain clauses that state: hazardous paint debris collected on vessel decks will be removed within 120 days, the ships will be sent to a local drydock for cleaning before their removal (to remove marine growth from the underwater hull and to clean flaking paint from areas above the water), and the horizontal surfaces of the obsolete ships will be cleaned every 90 days to prevent peeling paint from getting into the water. 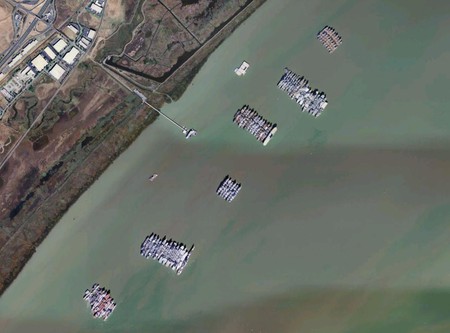 Ships at Suisun Bay, California. Note USS Iowa (BB-61) on the bottom end of the second row from the bottom @ USGS/Wikipedia

On April 28th 2004, a petroleum pipeline spilled 2,950 barrels into the Suisun Marsh

Due to a corroded pipeline, nearly 123,774 gallons of mid-grade diesel oil spilled into the Suisun Marsh. The Pipeline was owned by Kinder Morgan Energy Partners, and many indigenous animals that thrived in the beautiful marsh were injured or killed. There was various documentation of birds covered in oil seen near San Francisco, but no real investigation was ever taken to understand the major ecological impact. The spill was luckily contained to a relatively small area (around 200 acres) but still caused major problems for the wildlife. Kinder Morgan was forced to pay millions of dollars in fines due to knowledge of a corroded pipeline and negligence of operations. Strangely enough, in the same year, Kinder Morgan had a pipeline explode in Walnut Creek when a backhoe pierced a different metal pipeline running to San Jose. 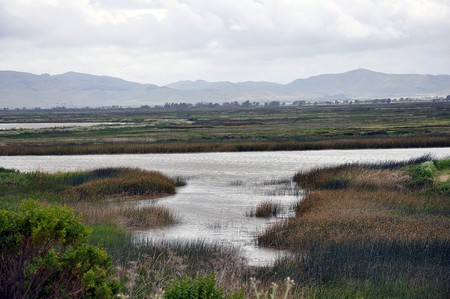 It was also the home to the GSF Explorer, formerly known as the USNS Hughes Glomar Explorer, a deep-sea drillship platform initially built to recover the sunken Soviet submarine K-129, which was lost in 1968

Another incredibly interesting ship that was housed at Suisun Bay was the $350 million ($1.6 billion today) GSF Explorer. The ship was built by the United States Central Intelligence Agency Special Activities Division and was a major part of the top secret Project Azorian, which intended to recover the sunken Soviet submarine K-129. The Soviet submarine mysteriously sank (one of four only major submarine disappearances), and the CIA created this ship with the intent to retrieve its nuclear codes and missiles nearly three miles under the ocean surface. The CIA also created a cover story in which it stated that the vastly expensive ship was to be used in commercial manganese nodule mining. The ship wasn’t used for much else and was mothballed for many years at Suisun before it was eventually scrapped to a Chinese company. 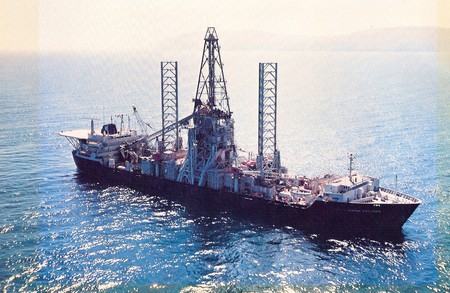 There were major environmental issues related to storing ships in Suisun Bay, as heavy metals and anti-fouling agents in shipboard paint peeled off the vessels and contaminated the surrounding area

Unknown to many officials, the storage of the Mothball Fleet at Suisun Bay created major environmental issues due to rusting metal and shipboard paint contaminating the nearby waterways. After public outcry due to lax environmental standards, Congress assigned the National Oceanic and Atmospheric Administration to oversee a program to deal with the toxic waste. The plan is now in its final stages, and the environmental eye-sore will be soon removed from the Bay Area. Although the Ghost Fleet was certainly an interesting sight for many Bay Area residents, it was essentially an environmental hellhole where these mammoth industrial projects were left to rust and rot away. If you do plan on catching a glimpse of the fleet, you should go now before the remaining ships are scrapped. 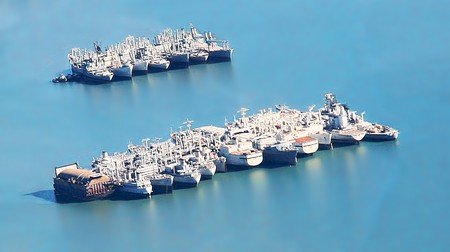 Although it is illegal to visit the ships, daring urban explorers have explored the ships and documented the creepy, rotting innards of the once majestic ghost fleet

Many urban explorers have taken it upon themselves to document the interiors of these once glorious items of the past. The pictures that come out of these adventures are often breathtaking and give an incredible insight into American maritime history. Fair warning for all those possible urban explorers: entering the ships is a federal crime, and security boats do patrol the area at all hours. The areas are also incredibly unsafe and contain various toxic materials. Although we are sure glad to have these incredible photos, we might just want leave this to the urban exploring daredevils.