2016 Bay Area Music Festivals To Get Your Groove On

Muse at Outside Lands Music and Arts Festival | © Edward Betts/WikiCommons
Although Coachella has officially wrapped up, the music festival season has just begun. From big names artists down to the local musicians and plenty of food and art in-between, the Bay Area hosts a wealth of festivities to meet your music festival fix. Indie rock, hip hop, electronica, or whatever your musical tastes are, head bopping awaits you.

Memorial
For those of you who think Napa Valley is good for nothing but vineyards and wineries, think again. Wine country hosts their annual BottleRock Napa Valley Music Festival on Memorial Day weekend. Though only in its fourth year, this three-day jamboree has all the makings of a great music festival, featuring big name artists like Florence + the Machine, Death Cab for Cutie, and Red Hot Chili Peppers, as well as music genres ranging from indie rock and hip hop to gypsy-punk. The legendary Stevie Wonder kicks off the festival on Friday, May 27th. Should you find yourself with a bit of downtime in between sets, the festival also features unique sculptures and art installations that will challenge your selfie game. Though three-day and single day passes are sold out, there’s still a chance to catch some of your favorite acts at the ‘aftershows,’ which features a series of BottleRock artists performing at several music venues across the Bay Area.
Looks like it's closed Hours or services may be impacted due to Covid-19
More Info
Open In Google Maps
575 3rd Street, Napa, California, 94559, USA
+17072534900
View menu
Visit website
Visit Facebook page
Send an Email
Give us feedback

Park
While Golden Gate Park often receives all the fame and attention from hosting a number of festivals and events, nearby Stern Grove’s got their own groove too. Delivering top quality free musical performances every Sunday at 2pm all summer long, the Stern Grove Festival kicks off on June 19th with a big picnic party fundraiser. Janelle Monáe opens the first Sunday show, followed by performances from the San Francisco Symphony, Hieroglyphics, and George Clinton, just to name a few. There’s no excuse to spend your summer moping around.
Looks like it's closed Hours or services may be impacted due to Covid-19
More Info
Open In Google Maps
Sloat Boulevard, Lakeshore, San Francisco, California, 94132, USA
+14152526252
View menu
Visit website
Visit Facebook page
Send an Email
Give us feedback

Want to walk in the footsteps of jazz greats such as Ella Fitzgerald, Duke Ellington, and Billie Holiday? Once known as the ‘Harlem of the West,’ the Fillmore District was an integral part of San Francisco’s jazz history in the 1940s and 1950s. Nowadays, the jazz heritage lives on in their annual Fillmore Jazz Festival. Boasting itself as the largest free jazz festival on the West Coast, the festival takes over 12 blocks of Fillmore Street, filling it with live music, food, art, and all that jazz. Grooving to live jazz beats on multiple stages, you’ll be tempted to shimmy with jazz hands as you stroll through this historic street.

Park
Outside Lands | © The Cosmopolitan of Las Vegas/Flickr
Coachella, meet your Northern California rival. Probably one of the most sought-after music festivals in the Bay Area, the three-day Outside Lands Music and Arts Festival hosts a diverse range of music artists, such as Radiohead, Lionel Richie, Zedd, Third Eye Blind, and Chance the Rapper. Set in the backdrop of Golden Gate Park, multiple stages are nestled in the park’s many grassy meadows and fields, so no need to worry about sound interference. Great musical acts aside, the festival hosts themed lands; with names like Choco Lands, Cheese Lands, Wine Lands, and Beer Lands, one can only take a guess at what culinary delights await.
More Info
Open In Google Maps
San Francisco, California, USA
View menu
Visit website
Visit Facebook page
Send an Email
Give us feedback

Bridge
Want a little local flavor? If you tire of the big acts and high-ticket prices, head across the bridge to the East Bay for some Oakland soul. Now in its 16th year, the Oakland Art and Soul Festival celebrates the city’s rich tradition and culture steeped in music, food, and art. Though the musical artists may not grace the top 40 charts, they are big names known in the community. But music isn’t the only draw at this festival. Be inspired by turf and all styles dance battles, as well as aerialists, acrobatic acts, and vertical dancing from local dance companies. And where else can you find a festival that includes a stage for poetry slam? If the diverse amount of entertainment isn’t enough to convince you, then the food surely will. From Southern jambalaya to Ethiopian, Indian, and Hawaiian cuisine, this is one festival that will feed your mind, body, and soul.
Looks like it's closed Hours or services may be impacted due to Covid-19
More Info
Open In Google Maps
Broadway, Downtown Oakland, Oakland, California, 94612, USA
+15102387402
View menu
Visit website
Visit Facebook page
Send an Email
Give us feedback

What kind of music can you expect at this festival? Well, the clue is in the title. The Hardly Strictly Bluegrass Festival started as a strictly bluegrass music festival 15 years ago but now welcomes a wide range of genres, including folk, psychedelic soul, country pop, rock and roll, and even DJs spinning the best funk, reggae, and disco beats. Past musical artists include Emmylou Harris, Hazel Dickens, Jessica Pratt, and Monophonics. With over 100 musical artists and seven stages, this is a great festival to attend for those looking for a free, fun-filled weekend. 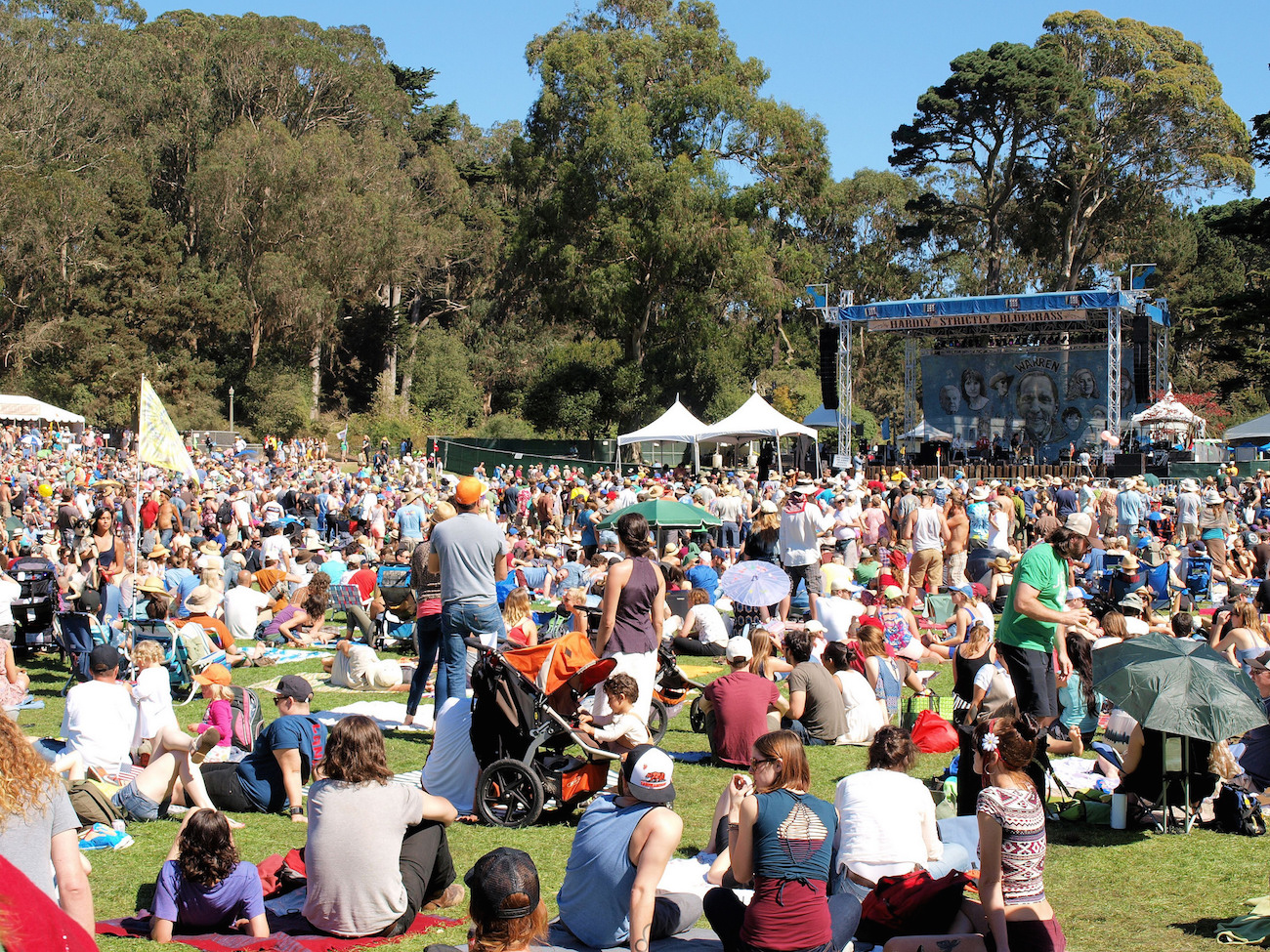 Bridge
Dr. Dog performing at the 2008 Treasure Island Music Festival | © Tyler Love/WikiCommons
With a backdrop of the San Francisco cityscape and a view of the Bay Bridge, the Treasure Island Music Festival is the one music festival that actually feels like an intimate concert. Smaller than most other multiple day festivals, there are only two main stages. No two artists perform simultaneously, making for a more enjoyable music experience since you’re not worried about dashing from stage to stage. Big acts and smaller name acts round out the lineup (which hasn’t been announced yet), with performers representing electronica, hip hop/rap, rock, and indie rock genres. Past artists have included deadmau5, CHVRCHES, Outkast, Beck, and Death Cab for Cutie. Besides having the chance to listen to every performer, where else can you boast about rocking out to neck-breaking beats on a manmade island?
More Info
Open In Google Maps
San Francisco, California, USA
View menu
Visit website
Visit Facebook page
Send an Email
Give us feedback
Give us feedback