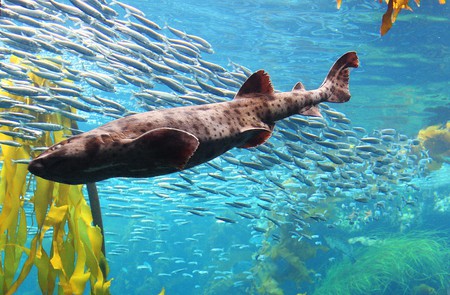 From scuba divers to snorkelers, the island of Santa Catalina gives people the opportunity to explore some of the most diverse underwater life in all of Southern California. The island is well known for its tourism, and is mostly popular with active adventure seekers and energetic student campers. No matter who comes to visit the island, it is almost impossible to not take a leap into the ocean and explore some of the local marine life. Here are a few fish you can expect to see on your underwater adventures.

The Garibaldi is the marine state fish of California. A juvenile Garibaldi starts off bright orange with bright iridescent blue spots. When fully matured, their spots disappear and they become the common bright orange color. Garibaldi have never been known to be fished for, but they definitely are a desired commodity for aquariums around the world. Even though they can be found anywhere from California’s Monterey Bay to Baja California, Mexico, they are most commonly found in the surrounding waters of Catalina Island. 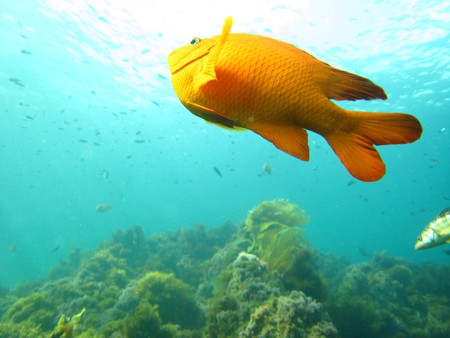 The California sheephead is one of the most interesting fish that inhabits the Pacific Ocean. All California sheepheads are born female. No one really knows why, but when they start maturing into adults, some start becoming males. The males are larger and have red eyes with a black head and tail while their midsection is reddish orange. The females are more of a washed-out pink, and have a white underside. These fish hunt for small animals such as crabs in the rocks during the day, but at night turn into prey for larger sea creatures. They hide themselves in the rock crevasses and cover themselves in a layer of mucus so that no predator can sense them. It’s worth noting that this type of fish should not be confused with the similarly-named sheepshead fish, which is famous for having teeth resembling those of a human’s.

The sunfish, otherwise known as the Mola mola, is considered one of the weirdest fish in the ocean. When they are born, they’re the size of a pinhead, but can weigh up to 822 pounds by the time they are 15 months old, which means they are capable of gaining up to two pounds a day. The adult Mola mola has teeth which are infused together inside a mouth that never closes. Their diet mainly consists of jellyfish, which tend to reside close to the water’s surface, making the fish easy to spot. Mola mola are also known as sunfish because they are frequently seen laying on their sides close to the surface—a practice which lets birds eat the parasites off their bodies. Their flat bodies are unique since they have no caudal (tail) fin, only a dorsal fin on its top and an anal fin on the bottom. 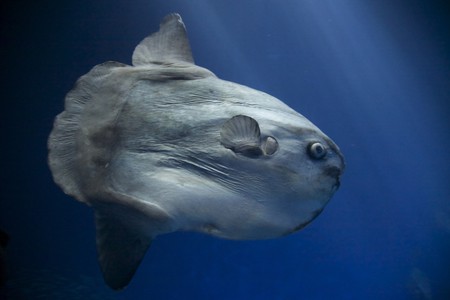 These slippery creatures can be found everywhere in the waters surrounding Catalina Island, but they prefer dark rocky crevasses near coral reefs. Despite its name, the eel is actually brown, but the combination of light background colours and yellow mucus around its body make it look like it has a green complexion. Though they are feared due to their sharp teeth and elongated bodies, the reality is that they tend to stay away from humans where possible, and only keep their mouths open in order to breathe and catch small fish. 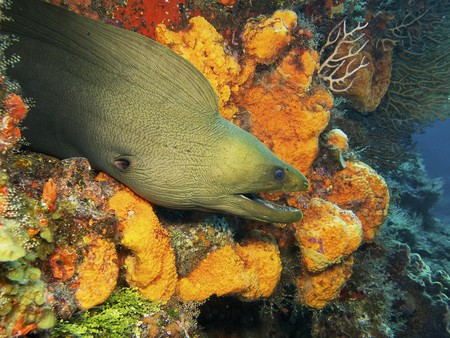 Bat rays are one of the most common fish to catch sight of when on Catalina Island. They’re most commonly found in sandy areas, where they can burrow under the sand to look for food and hide from potential prey. Unfortunately, this means that it’s possible to accidentally step on one and get stung. One way to combat this is by doing a “ray shuffle”—whereby you make sure to kick the sand around you to alert or scare away any rays that may be underfoot. Adult female bat rays are also easily distinguishable as they’re often up to five times the size of the male bat rays.

Leopard sharks are one of the most common sharks seen in California’s waters. They are found in shallow waters and occasionally in kelp forests. These sharks are easily differentiated by the dark grey spots along their backs and sides of their body. Like all sharks, the leopard shark cannot achieve natural buoyancy, so it has to swim continually in order not to sink. They usually hunt for fish on the ocean floor but also live off shelled animals such as clams and crabs. Don’t worry if you encounter them on a scuba dive though—they only like small prey.