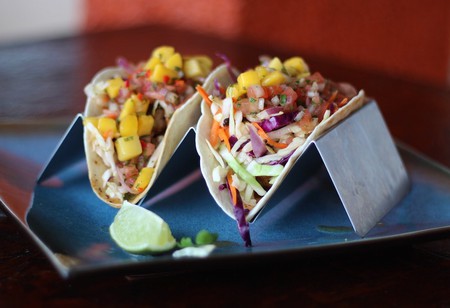 Given its proximity to the border, San Diego boasts both authentic Mexican food as well as its own fusion creations, such as the french-fry stuffed California burrito.

The city is home to countless Mexican restaurants and food trucks, and deciding which one to go to can be overwhelming. The next time you have a craving, try one of these five food trucks serving up inexpensive and tasty bites, from shrimp tacos to gorditas, aguas frescas and elotes.

Specializing in food from Mexico’s Querétaro state, Phatties gets its name from the English translation of the popular Gorditas dish—fat tortillas that come stuffed with a variety of fillings. For those in a less fatty mood, Phatties also serves fresh-fruit waters and smoothies. Their elotes (grilled ears of corn that can come topped with mayo and chili powder) are a great option for a quick snack. The Phatties truck mostly travels around the Escondido and San Marcos area, but follow their Twitter, Facebook or Instagram account for the latest updates on where they are stationed.

Boasting some of the best prices and best seafood, Mariscos Nine Seas is definitely a favorite among locals. They’re a seafood distributor with a food truck stationed in a Target parking lot in South Park. Among their specialties are shrimp tacos, ceviche, and tostadas. For a giant meal, customers should try the “crazy” tostada, which piles gobs of seafood on top of crispy-fried tortillas. The best part? Fish tacos cost less than $2 each.

Help me San Diego, you're my only hope.

Family-run since 1983, Kiko’s Place is known for their OG fish taco, which costs just $1.75. Their spicy octopus taco has also gained recognition, with San Diego Magazine including it on their list of “Very Important Tacos.” The taco mixes octopus with garlic, cabbage, cream, and cheese on a corn tortilla. The truck parks on a corner in the Normal Heights neighborhood.

Started by local chef Aaron Valenzuela, Zoe’s Place frequently pairs up with local breweries for their stops. On Sundays they are often stationed outside Thorn Street Brewery in Barrio Logan, so customers can get a michelada with their tacos. The food is a bit pricier than other food trucks, with tacos starting around $4.00. Zoe’s Place also has breakfast options, such as a breakfast burrito with potatoes and bacon, and chilaquiles verdes with scrambled eggs. While they do have a website with their menu listed, Facebook is the best way to know where the truck will be stationed.

Usually stationed at Third Avenue Alehouse in Chula Vista, Birria Barriga also makes occasional stops at Thorn Brewery in Barrio Logan. The truck gets its name from the puffy birria tacos it sells. Birria is a slow-cooked meat dish marinated in spices that, while often served as a stew, also makes for a flavorful taco filler. Follow Birria Barriga’s Instagram for their weekly schedule and daily menu.