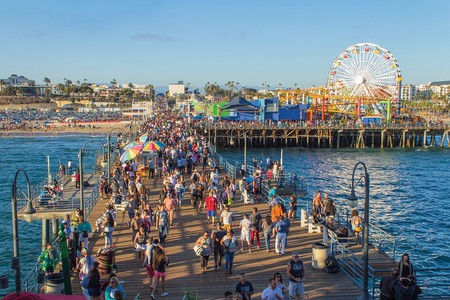 This instantly-nostalgic structure served as a backdrop for a number of Hollywood movies over the years. Here are five memorable scenes set above the crashing waves on the historic Santa Monica Pier.

With a U.S. release date of March 24, 1950, this classic romance and drama stars Micky Rooney and Jeanne Cagney. Considered Rooney’s greatest onscreen achievement, the film follows the downward spiral of a grease monkey named Danny Brady, played by Rooney. The Santa Monica Pier is the setting for the movie’s dramatic climax. This film is an ideal watch for those interested in classic cinema, with plenty of interesting plot twists.

Inspired by real-life events perpetrated by Chicago’s Gondorff brothers, this 1973 classic film stars Paul Newman (as Henry Gondorff) and Robert Redford (as Johnny Hooker). The pair of con artists seek revenge after a mob boss (played by Robert Shaw) murders their mutual friend. Located on the Santa Monica Pier, the Looff Hippodrome is where Newman’s character lives and works with his girlfriend, Billie (played by Eileen Brennan). Constructed in 1916 by master woodcarver Charles I.D. Looff and his son, the two-story building houses a carousel first transferred to the Santa Monica Pier in 1947. It features 44 hand-carved wooden horses spinning around a 1922 Wurlitzer organ.

Released December 13, 1979, this blockbuster parody was directed by Steven Spielberg. The comedic debut of this well-known director, the film has developed a large cult following for its over-the-top delivery and extravagant special effects. The story follows a panic-stricken Los Angeles descending into chaos in the wake of Japan’s attack on Pearl Harbor. Including S.N.L. alumni such as John Belushi and Dan Aykroyd, the film maintains a whimsical and chaotic pacing. The movie also includes scenes with notable actors John Candy and James Caan. During the climax, a Japanese submarine attacks the Santa Monica Pier causing the famous wheel to comically roll into the ocean below.

Based on a novel by Winston Groom and directed by Robert Zemeckis, Forrest Gump was released in 1994 and stars Tom Hanks as the titular character. The story depicts several decades in the life of Gump, who is a slow-witted but good-natured and athletically gifted man from Alabama. Whether meeting Elvis Presley or witnessing the Watergate scandal, Gump becomes involved in many defining moments of recent United States history. The Santa Monica Pier enters the film after Gump decides to start running for “no particular reason.” In a funny twist, a worn out Gump later decides to “go home to Alabama,” leaving a large following of runners wondering “What do we do now?”

Directed by John Favreau, Iron Man was released in 2008, adapting Stan Lee’s 1963 comic book to film. Robert Downey Jr carries the film version of the story as billionaire industrialist and inventor, Tony Stark. Over the film’s duration, Stark perfects a suit of body armor which saved his life from a critical injury he sustained during a hijacking. During the initial test, a child riding the Santa Monica Pier‘s famous ferris wheel notices Stark flying through the air while.