<a href="https://www.flickr.com/photos/aresauburnphotos/3760441055" target="_blank" rel="noopener noreferrer">Sacramento Skyline | © Nick Ares / Flickr</a>
Sacramento once served as a source of wealth for the state during the Gold Rush era now cultivates some of the most uniquely winsome attractions and sights—this humble farm-to-fork capital offers a wide array of attractions and some of the best hidden gems of northern California. Here are the 20 must-visit attractions in Sacramento.

Bridge
Sacramento Tower Bridge | © Latha B / Flickr
This vibrant golden lift bridge across the Sacramento River is difficult to miss as it connects West Sacramento to downtown East Sacramento. Although it is rather a young bridge, built back in 1934, it still holds great significance as it was officially included in the National Register of Historic places in 1982. Interestingly, this art deco-style bridge was initially painted silver at the time of its creation, but after some complaints the bridge actually went through a fair number of color changes; its recent gold coat was the result of the most popular vote back in 2002.
More Info
Open In Google Maps
Sacramento, California, 95814, USA
+19168088300
View menu
Visit website
Visit Facebook page
Send an Email
Give us feedback

Building, Museum
California State Capitol | California State Capitol
The regal capitol building hosts the Californian government, namely the governor and state legislature. Built more than a century ago, the lot and the architecture as whole has been added to the National Register of Historic Places and is considered a California Historical Landmark. Of course, there are many opportunities to soak up the history in the building, as the Capitol features a free museum, offers free guided tour, and even shows free historic films in the basement.
More Info
Open In Google Maps
10th and L Streets, Sacramento, California, USA
+19163240333
View menu
Visit website
Visit Facebook page
Send an Email
Give us feedback

The 30-room Governor’s Mansion has housed 13 governors since 1903, but after then-Governor Ronald Reagan’s short-lived residency of four months, an alternate mansion was built in Carmichael to house Jerry Brown. California governors have lived in different houses and hotel suites, but the original mansion was back to its full swing when Governor Jerry Brown moved into the residency in 2015. Leland Stanford Mansion was also home to several governors and offers daily tours—some even speculate this peculiar mansion is haunted.

This must-visit attraction is a rather unavoidable one. The 56-foot-long and 10,000-pound colossal red rabbit installation located inside of the Sacramento International Airport holds various meanings to all who travel to Sacramento. The suspended rabbit, made from 1,400 aluminum triangles is leaping into a suitcase on the airport floor, giving the whole piece an interactive element to anyone walking by. According to Leap’s artist and the creator, Lawrence Argent, the sculpture symbolizes the innate human desire to acquire “stuff” at a fast pace, and the fragile motions that consequence either attaining or losing the said “stuff.” 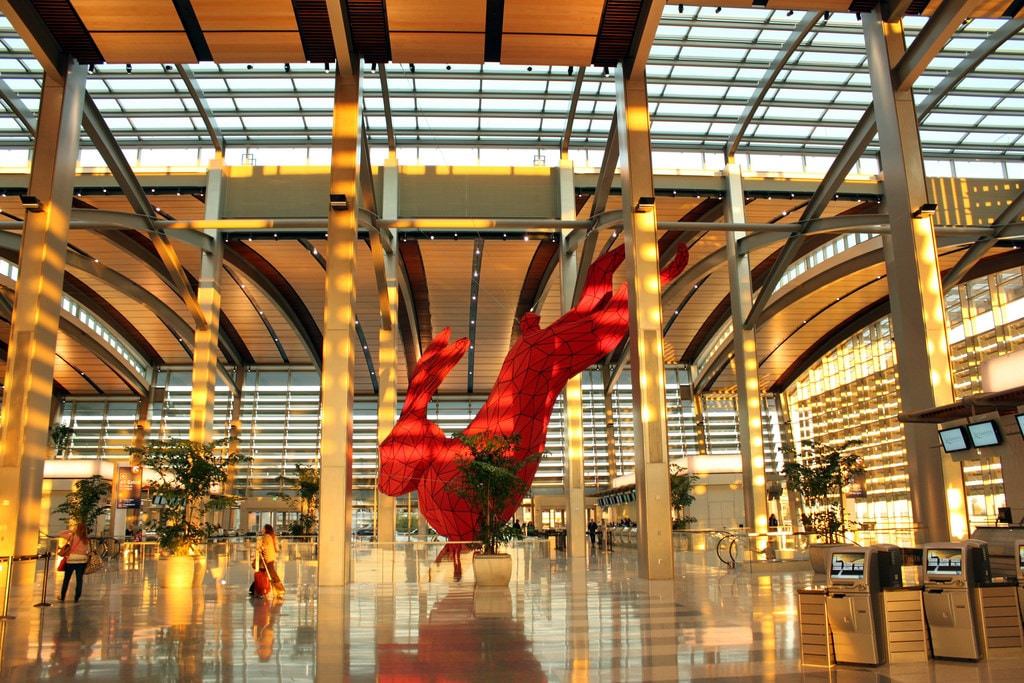 If viewing one-of-a-kind, remarkable art is on the list, Sacramento offers a wide variety of murals adorning even the most unexpected sides of the streets. These eclectic collections of art are scattered across the city and can easily be found by searching the #sacstreetart or #streetsac hashtags on Instagram; better yet, use a map to find current murals in Sacramento. Moreover, Sacramento held a Wide Open Walls mural festival in August 2017, which not only brought together over 40 local, national, and international artists but also left some of the most astounding art all across the Sacramento region.

The #wideopenwalls916 work of @lorazombie on R Street, between 13th and 14th streets. Nice to see more public murals integrate space and science fiction. In her own words: “I don’t really like to use words when I can use paints. And I don’t really like to put some specific sense to my pictures, because the magic happens when each separate person can create, like, the sense of this picture by itself. “But basically this picture is about what was in my mind when I was creating this. Everything that happens with me in my life, I’m always like, ‘Thank you, universe. Thank you, universe.’ So this piece is, like, the boy being in love with the universe, which means he’s super-thankful to the universe for all experiences that happen to him.” Source: http://sacb.ee/aGnt #sacramento #streetsac #sacstreetart #visitsacramento #iheartsacramento #sacramentoproud #wow916

Staying on the topic of art, Crocker Art Museum is one of Sacramento’s most prized locations as it houses some of the most preeminent collections of Californian alongside African, Asian, European, and Oceanic art. Although the doors to this Italianate mansion style gallery opened in 1872, the museum expanded to another connecting building built in a much modern style in 2010 to accommodate their growing art collection patron base. The museum constantly features new exhibitions and has some notable works by artists such as Pierre-August Renoir, Gerrit van Honthorst, and Wayne Thiebaud in its permanent collection. 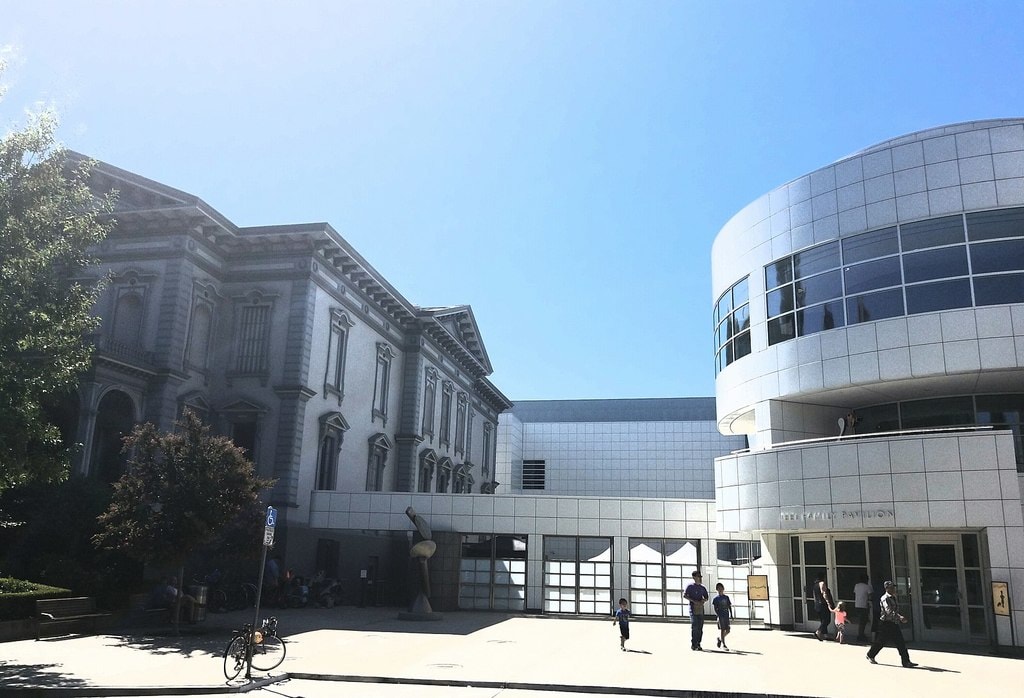 The annual California State Fair, one of the most acclaimed summer attractions (July 8–30), is easily a highlight in the hottest months. This seasonal tradition began in 1854 as the California State Legislature’s way to showcase the state’s best agricultural products like flowers, livestock, and produce but grew over time to celebrate so much more, like California’s diverse cultures, traditions, and achievements. Today, the finest produce is served alongside some atrocious culinary creations (like deep-fried Twinkies). 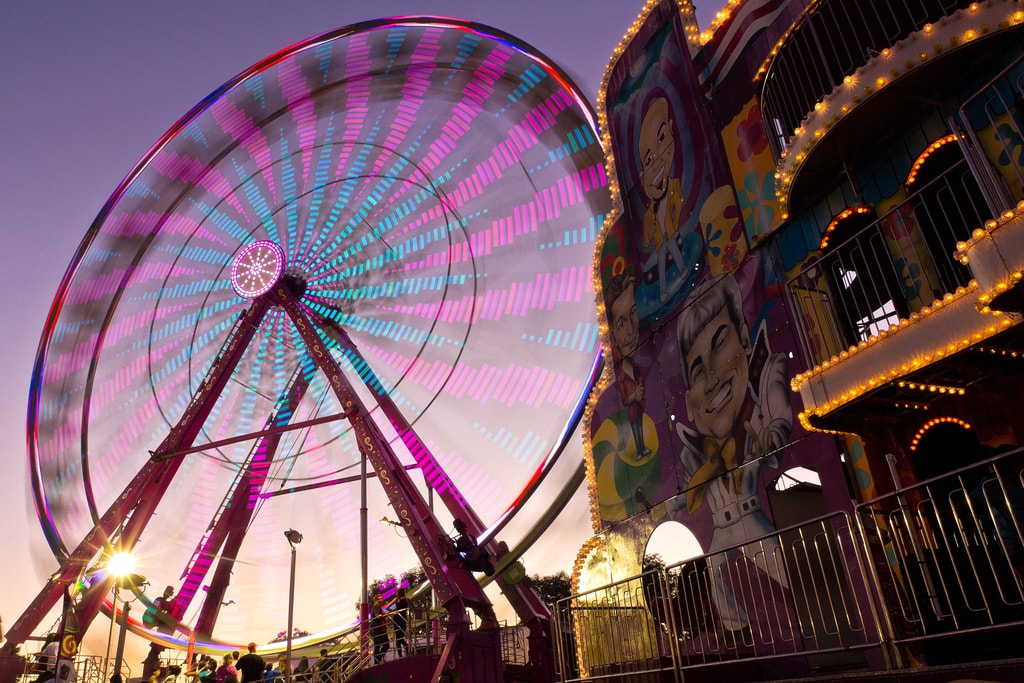 Visiting the market might sound like an odd attraction, but as America’s Farm to Fork Capital, the Sacramento farmer’s market is to be experienced at least once in a lifetime. The agrarian life style has been part of Sacramento’s identity for so long, since there is about 1.5 million acres of farms and ranches in the area. Not only are the locally grown seasonal crops readily available, but many restaurants in the region utilize these fresh sources of nourishment, uniquely distinct to Sacramento. No matter the season, the farmer’s market will always be one of the most appetizing attractions.

American River is one of the two most prominent rivers surrounding Sacramento. Running from the melted snow pack of the Sierra Nevada mountains, the river in entirety runs 120 miles. Taking a significant portion of California history, American River lead to the beginning of the Gold Rush era in 1848 when gold was discovered at Colma. Aside from being a key location in history, the American River comes equipped with an abundance of outdoor activities. The Memorial Trail spans Discovery Park to Folsom Lake and is filled with bikers, runners, and roamers. The river also presents the opportunity to water ski, kayak, whitewater raft, or even fish during the warmer months. There is also the Effie Yeaw Nature Center, which houses information, animals, books, and a gift store at the American River.

Old Sacramento was the result of a city that grew from the waterfronts in the means of better transportation. This ease of transportation meant Old Sacramento served as Western terminus to the Pony Express, as well as having the first transcontinental railroad and telegraph. Sadly, as the result of the convenient location, Old Sacramento also has withstood some historical floods in the past and the whole area had to be raised. The raised streets to this day hold over 50 historic buildings, most of which now are used as shops and restaurants. Some of the more notable destinations in Old Sacramento are the Sacramento History Museum, Evangeline’s Costume Shop, and Wells Fargo History Museum.

More than just the east side of downtown Sacramento, Midtown has become a metropolis of Sacramento’s most popular foods and cultural happenings over the years. During the day, streets bustle with shoppers and periodic festival-goers (Chalk It Up festival), and the popular dining venues, bars, and clubs light up at night. Midtown even offers the oddball Sac Brew Bike, a communal bike-bar-crawl that gets everyone pedaling metal to the next pint. 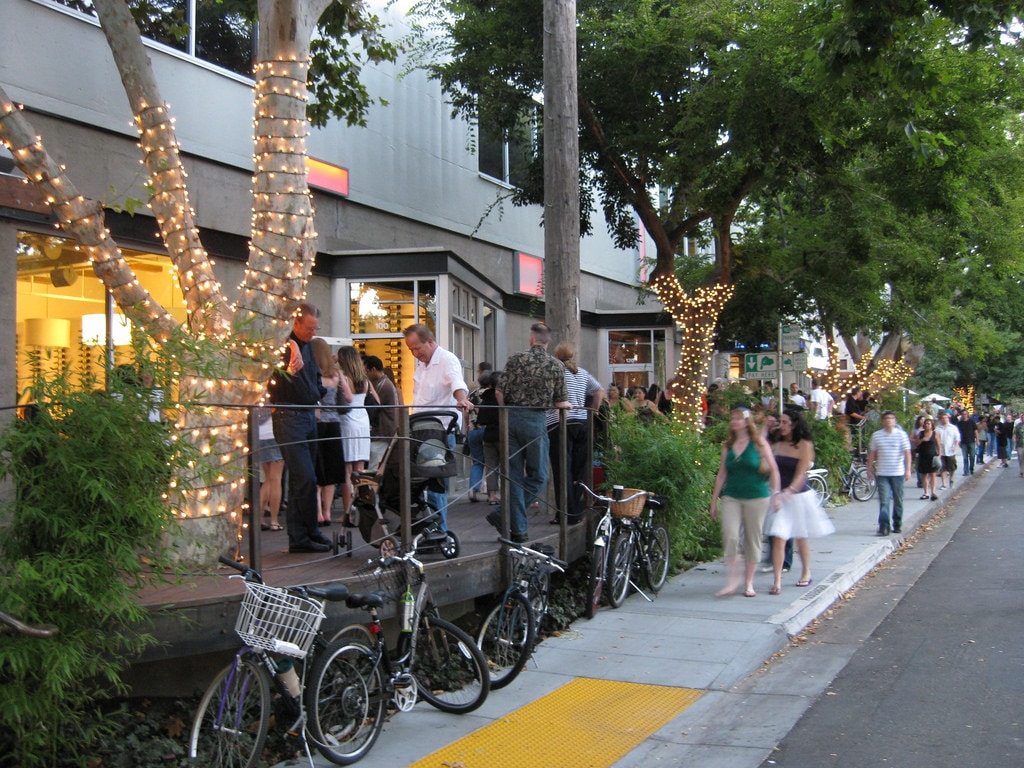 Park
Sutter's Fort | © Lorean Javier / Flickr
Sutter’s Fort was originally granted to John Sutter by the Mexican government in the 19th century and then used for agriculture, trade, and European settlement in Central Valley. After the rise of the Gold Rush, however, Sutter’s Fort was left behind as people migrated to Colma. Named a National Historic Landmark in 1961, the fort was restored and now serves as must-visit attraction, a refreshing way to absorb and take in a historical site that shaped not only Sacramento but California as a whole.
More Info
Open In Google Maps
2701 L Street, Midtown, Sacramento, California, 95816, USA
+19164454422
View menu
Visit website
Visit Facebook page
Send an Email
Give us feedback

A newly refurbished addition to Sacramento, McKinley Park itself opened in 1871 as a 30-acre park, and in 1928 Frederick N. Evans designed and developed a rose garden as the part of the City Beautiful movement. 2012 saw the garden undergo some major renovation with new irrigation systems and replaced roses. To make this possible, the community came together to fundraise and develop a stunning, sustainable rose garden. Now the garden has more than 1,200 roses and serves as a fragrant and delightful attraction to the city Sacramento.

Docked at the Sacramento River waterfront in front of Old Sacramento is a 285-foot (87-meter) long paddle steamboat: Delta King, christened in 1927 and used to travel between San Francisco and Sacramento. Its sister ship, Delta Queen, operated out of the Mississippi River. When the WWII broke out, both ships was drafted into the U.S. Navy; afterward, Delta Queen took the engines of Delta King for spare parts. After years of being towed around, looking for the right home, Delta King was bought by a family in Old Sacramento and historically renovated, and it now serves as a hotel and restaurant. 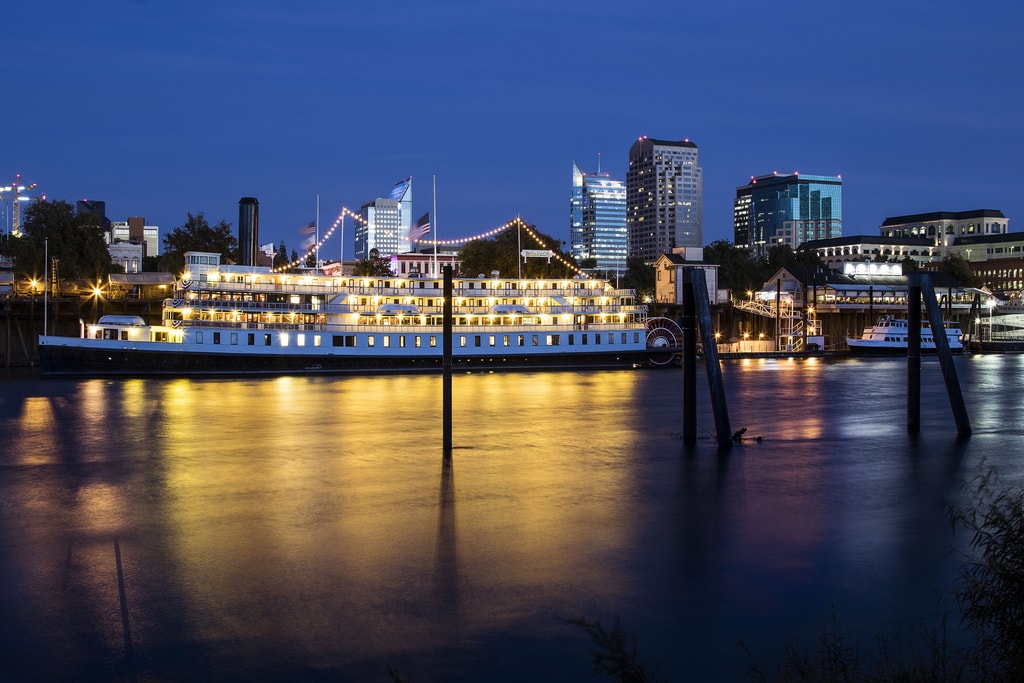 Sacramento Zoo opened in 1927 with a mere 40 animals, but when the Sacramento Union Newspaper sponsored a drive in 1948, the zoo was able to adopt Sue the elephant, later joined by Winky. Today, it has more than 500 animals. The newest members to the Sacramento Zoo were baby flamingos—the adorable hatchlings even caught the eye of Jimmy Fallon. 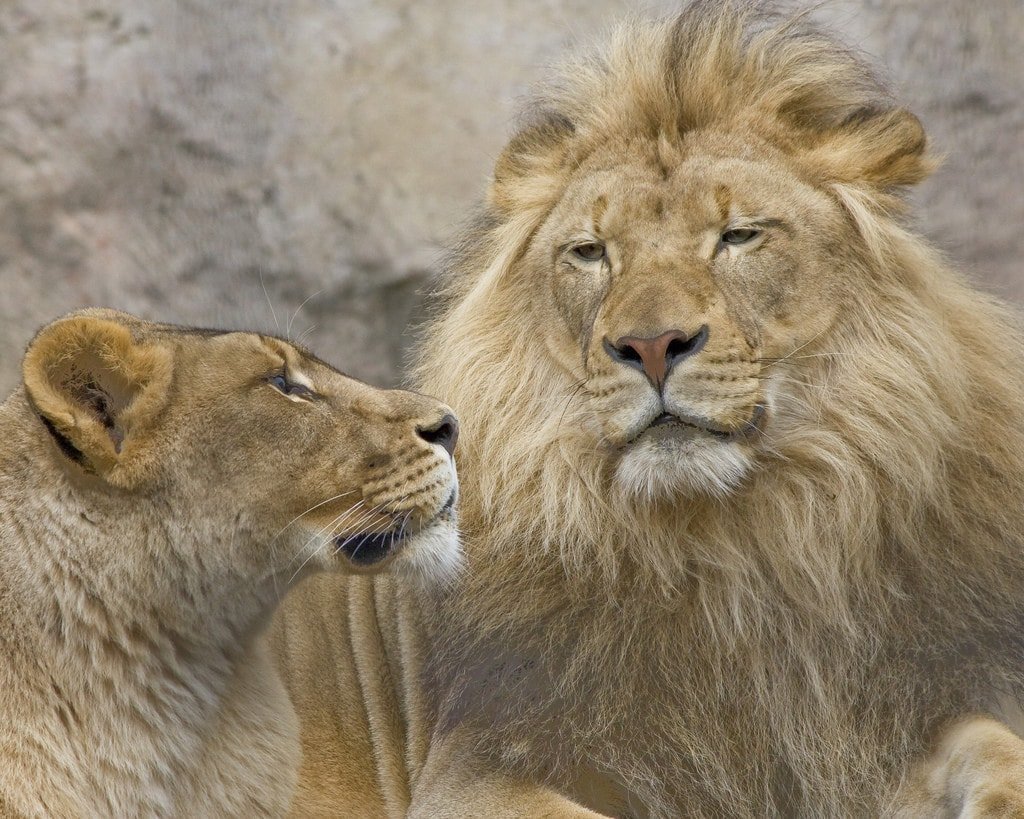 Catering kids and anyone who loved storytime as child, Fairytale Town welcomes imaginative and creative adventure-seekers. This park has over 25 playsets and attractions that allow for fairy tales and nursery rhymes to come to life. From the Giant’s Foot from Jack and the Beanstalk to The Little Engine That Could, Fairytale Town has got it all.

Finding fun stuff me and rylee can do out here and found fairytale town. #sacramento #fairytaletown #ryleemaegantz

Back in 1934, the Old Sugar Mill was created to be used as a beet sugar refinery, but later in the sugar mill was refurbished in 2000 and reopened in 2005. The new aesthetically gorgeous Old Sugar Mill, with exposed brick walls and bucolic décor, is not only a winery but also a wine-tasting establishment hosting over 13 different types of wineries in northern California. The Old Sugar Mill accompanies the diverse wine with music, food, picnics, or seasonal events, depending on the time of the year.

Although Davis is approximately 20 minutes from Sacramento, the Davis Arboretum is the perfect stop to make for a nature walk. Located in the University of California, Davis campus, the Arboretum contains 100 acres of garden and a small flowing creek. The garden is always brimming with diverse plant collections from around the world as well as various wildlife such as frogs, birds, and even otters. This picturesque serene greenery is an absolute sight for sore eyes that can’t be missed. 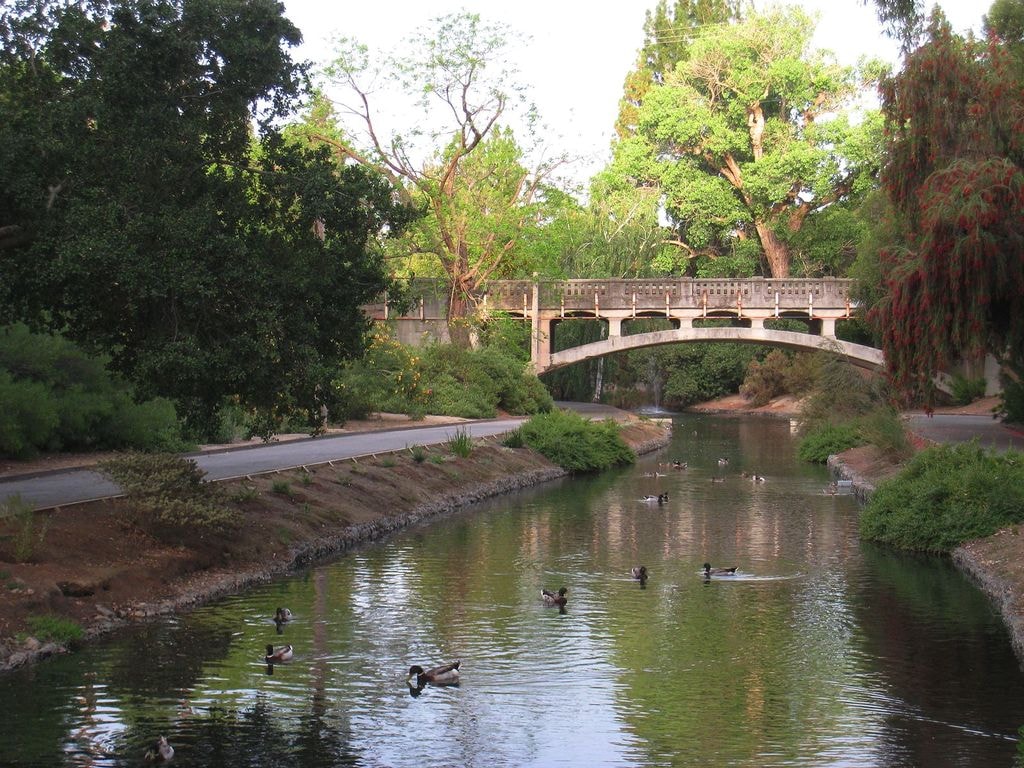 This historic theater originally opened its doors over a century ago as the Empress Theatre; after changing the theater’s name to Hippodrome Theatre, tragedy struck when the marquee fell and killed an unexpected bystander. The theater then changed its name to Crest Theatre and remodeled the venue to look more art deco. Although the theater had a good run of business in the 1950s and 1960s, its gradual decline in popularity led to its shutting down in the 1980s; in the mid-1990s, however, the theater was revived and back in business showing niche films, live performances, and lectures. Crest now also hosts events such as the Sacramento French Film Festival, Sacramento Japanese Film Festival, Sacramento Gay and Lesbian Film Festival, and Sacramento International Film Festival. 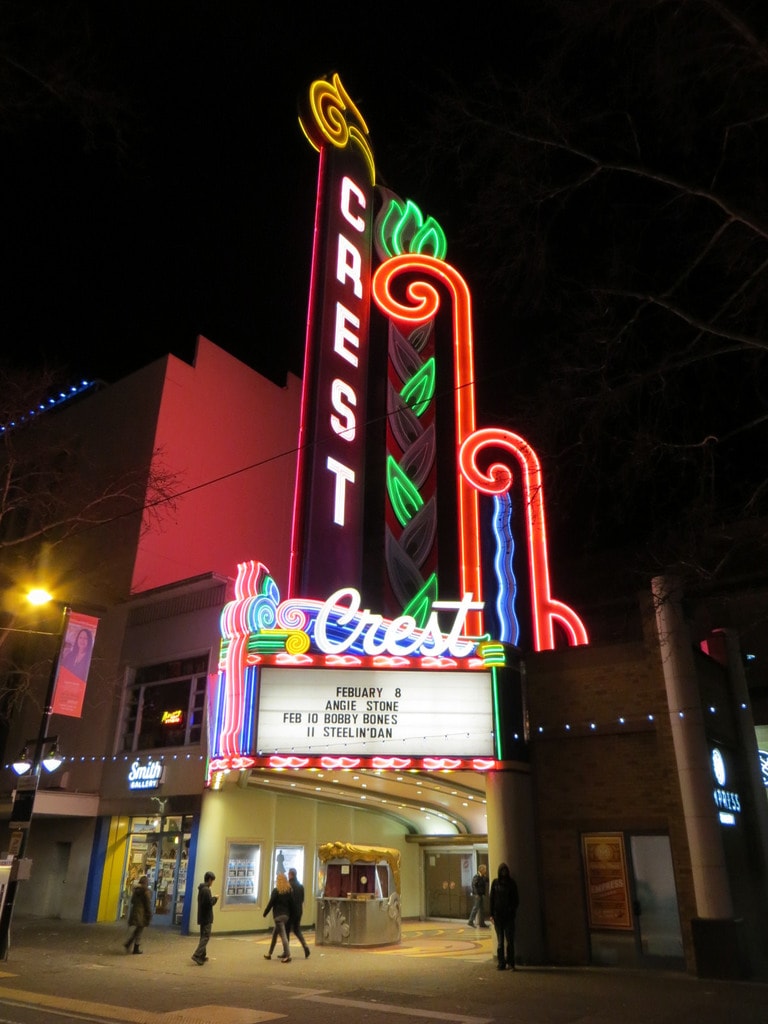