San Francisco is a welcoming venue for creativity, bursting at the seams with the work of unique minds. Plenty of creators have found their outlet here, from fashion to gallery-quality painting, photography, and sculpture. Of the many making gorgeous work, two talented artists have found their niche in illustration. Meet Shannon May and Roman Muradov, masters of their craft and illustrators whose art is as rad as they are. 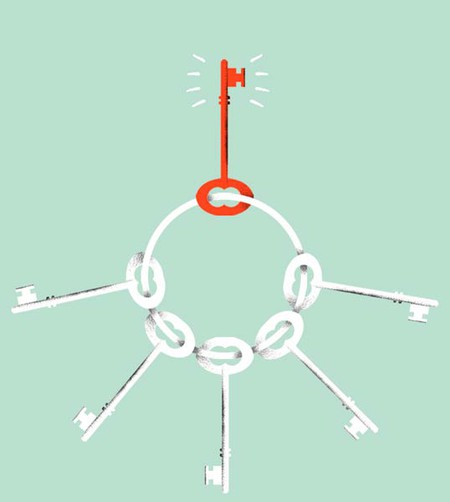 Meet Shannon May. She spent her childhood on the coast of southern Connecticut amongst ruins of the Revolutionary War and monk parakeets. She graduated from Maryland Institute College of Art with a BFA in illustration and printmaking. She is inspired by the aesthetics of science and loves museums, Sailor Moon, geometry, and spends her free time making jewelry, playing ukulele, and listening to records.

The Culture Trip: Let’s start where it all began. Was there a specific event in your life that inspired you to draw?

Shannon May: As I’m sure is the case with most artists, I’ve been drawing pretty much as early as I can remember. I do specifically recall a certain My Little Pony drawing that my dad was particularly impressed with. I think I was copying it from my lunch box. Also a breakthrough piece was titled ‘Slithering Snakes,’ which was just a bunch of wiggly watercolor lines I made in kindergarten, part of my abstract expressionist period. It’s still hanging in my parents’ house and I’m sure it will be worth a gajillion dollars someday.

What would you consider the most important and/or unique aspect of your style as an illustrator?

Ahhh, the S word. The bane of every illustration student’s existence! There’s a weird obsession with style that I’m not sure I subscribe to… I kind of think it’s something that just happens to you and not something you can necessarily be conscious about, but I’ll try to answer. I actually don’t think I’m particularly good at drawing, so I’ve had to find ways to around that, which has maybe resulted in a style? My hand isn’t very steady so I tend to favor shapes over lines. I still draw most things analog, only using the computer at the end to put the pieces together, which seems to be dying a bit, though it’s certainly not unique to me. 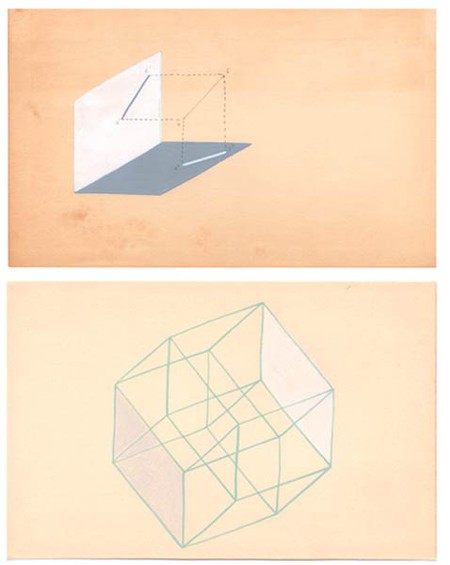 When you draw a blank (pun certainly and exasperatingly intended), where do you seek inspiration?

I have a whole bookshelf full of old out-dated science and math textbooks that I flip through when I’m particularly stuck. I find them really inspiring; I like the idea of Occam’s Razor, that the simplest solution is usually best, and try to use that approach in my illustrations. The diagrams in the textbooks kind of remind me to keep things simple, and also sometimes can be used to describe things they weren’t meant to. What are the fewest elements I can use to communicate the concept? I don’t like clutter.

Have you had any mentors who’ve guided you along the way? If so, what is the most important advice you’d received from them?

My greatest mentor has probably been my high school art teacher, Peter Ziou. Again, I’m sure a lot of people will say this, since high school’s a pretty formative time. I’m not sure he gave me specific advice so much as encouragement and support. He gave me a safe space as a weird, awkward teenager to explore and experiment without judgment. I think that’s really important, especially when you’re young, being allowed to make mistakes and not feel like every piece has to be your best. He also let me build a 6′ x 4′ Lite Brite as my senior project, so that was cool.

So, let’s talk triangles. What do you like about them?

What don’t I like about them? They can be combined to create so many other amazing shapes (prisms, pyramids, icosahedra, geodesic domes). They’re a great building block. 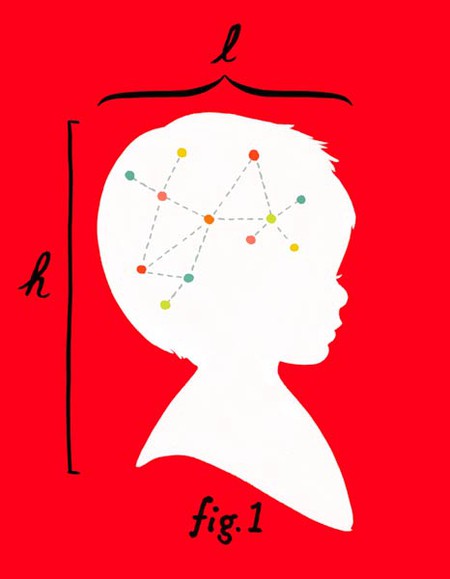 What subjects/topics have inspired your art, if any?

I’m definitely inspired by the aesthetics of scientific diagrams and geometry. This is probably less obvious in my work than it used to be, but it’s still something I think about a lot. To me, illustration is all about communicating a concept visually to as many people as possible. Isn’t that also the work of scientific diagrams? To communicate an incredibly abstract concept visually in a way we can understand. So I definitely look to science for solutions.

How has being in San Francisco fostered your craft? Has it hindered it in any way?

I grew up in Connecticut, where there weren’t a whole lot of venues to show work and also most people wore polo shirts, khakis and boat shoes. San Francisco is full of galleries that I really care about and want to support artists, so that’s amazing. It’s also full of lots of other wonderful weirdos. It’s bright and vibrant. There’s a great art community here. That said, of course the raising rents and evictions are making it difficult to live in the city for everyone, but also driving a lot of artists away. Many of us are using our living rooms as studios because we can’t afford a proper studio space. That can be a bit stifling. 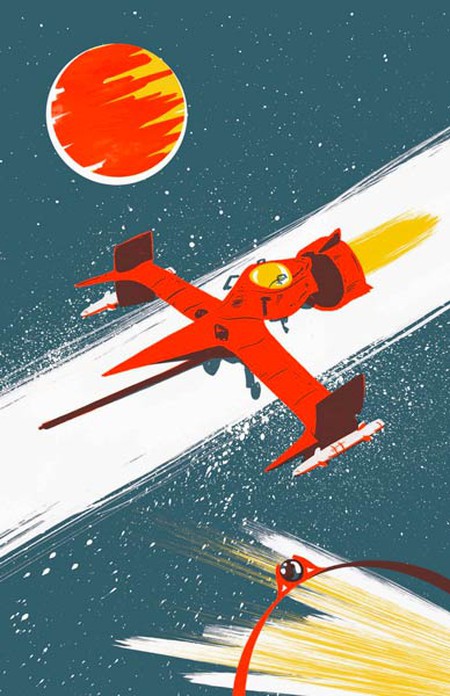 What types of projects most challenge you?

Sometimes I find the less conceptual projects the most challenging. I have a hard time wrapping my head around something that’s just supposed to look nice but doesn’t have to communicate a particular message. I’d like to try to do more of that kind of work since it baffles me so much.

Hard hitting question: as a female illustrator, what are some triumphs and setbacks you’ve experienced?

I think being female anything means facing a lot of setbacks that are so ingrained in our culture we sometimes don’t even notice them. But one moment in particular I can remember that related specifically to being a woman is when I refused to sleep with an older and more experienced illustrator, early on in my career. He threatened that I ‘would never work in this town again!’ like some kind of dastardly villain. I was fresh out of college and terrified that my illustration career was over. I’m not sure if it was an empty threat, or if he tried to follow through with it and failed, but I’m proud to say I’m still working!

Do you have any advice for female illustrators trying to make it out here?

It probably sounds cheesy, but try to be fearless. Make work that you like, not what you think others will like. Sing a lot of karaoke. 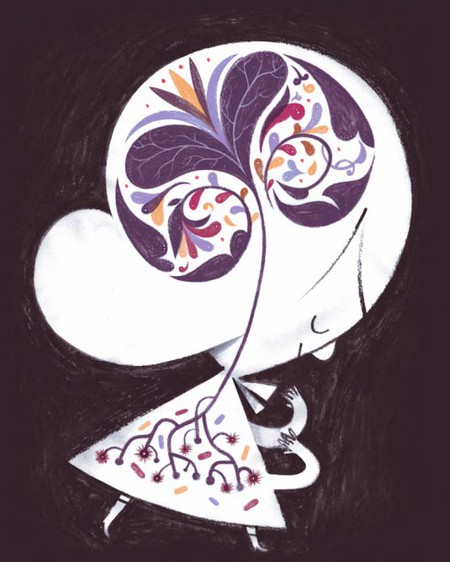 Let’s meet Roman Muradov. He is an illustrator and cartoonist from Moscow, Russia, currently living in San Francisco. His clients include the New Yorker, New York Times, Wall Street Journal, Penguin, Random House, Vogue, Time, NPR, GQ, Washington Post, Google, Lucky Peach and many others. His work has been featured in the Society of Illustrators (Gold Medal), ADC Young Guns, American Illustration and numerous other shows. His graphic novella In A Sense (Lost & Found) was published in September 2014 by Nobrow Press. He likes books, tea and long aimless walks.

Was there a specific event in your life that inspired you to draw?

What would you consider the most important/unique aspect of your style as an illustrator?

Well, there’s no one who does what I do, so I guess that’s good. 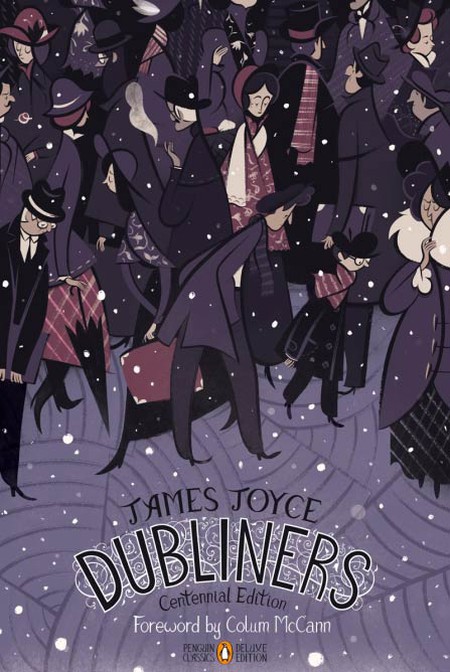 Where do you seek inspiration when you draw a blank?

When I don’t feel like doing anything, I don’t do anything – I walk around or read or watch sitcoms. That takes up most of my day actually, and I think it’s far more important than sitting down and drawing. Unless there’s a deadline of course, in which case my brain usually comes up with something in semi-panic.

Any mentors who’ve guided you along the way? If so, what is the most important advice you’d received from them?

No, but I’ve never wanted one. I guess I see a few dead artists as my mentors, mainly James Joyce and Marcel Duchamp.

Has culture provided any particular influence on your work?

I love all things lowbrow and highbrow, and I detest anything middlebrow: stuff that’s a bit clever, but not clever enough to challenge the reader. Generally, I want my art to exist outside any social or cultural context, so there’s nothing particularly Russian or Armenian or anything about it – I want the force of style to erase any identity I may have. Tom McCarthy in a recent interview said something like ‘the author is a byproduct of literature.’ I couldn’t agree more. 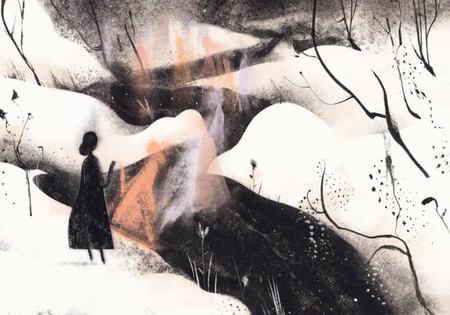 What subjects/topics have inspired your art, if any?

Language, futility. I draw a lot of teapots – they’re very comforting to draw – dogs too (fluffy ones in particular), maple leaves, cats.

How has being in San Francisco fostered your craft? Has it hindered it in any way?

It takes a long time for the environment to seep in – I’m only now living in Moscow of my nightmares – which is far more real than the place I occasionally visit. San Francisco is a great walking city and the walking rhythm is essential to my writing & drawing style; I couldn’t live in LA for instance. Nabokov said that ‘art is exile,’ and I do feel that you have to leave the place and have it reconstructed in your memory to see it in full. Reality is disappointing, anyway. 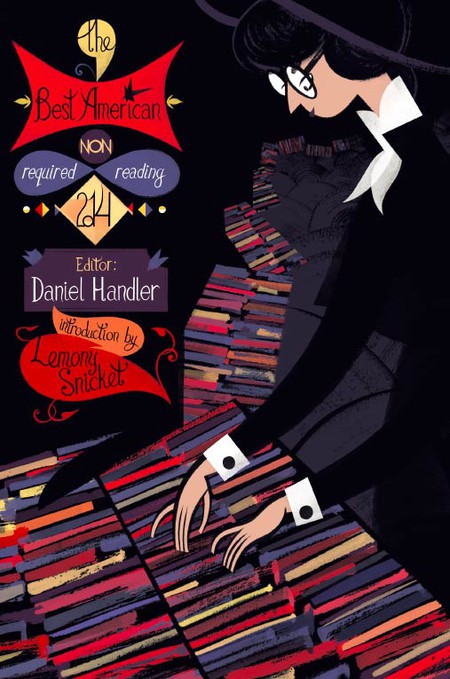 What types of projects most challenge you?

R – Fiction is always a good challenge, since I usually feel that there’s no need to illustrate it in the first place, so I have to attempt something of a visual criticism that could add something to the text instead of simply repeating it in pictures. For my Dubliners cover I attempted to connect some of the dots in the arrangement of the stories without overstating anything, to get the general atmosphere of the tone and rhythm in the flow of the line-work and the feel of the colors.

Do you have any advice for illustrators trying to make it out here?

Spend more time not drawing – take walks, read books without drawings in them, talk to people, listen to birds, get laid, question yourself and others. We live in an age of senseless meliorism, and applying it to art can only lead to complacency and mediocrity. Forget about goals and achievements; in the end, it’s all about the process.

Learn more about San Francisco art–such as street art, past exhibitions, and an iconic bookshop with work by local authors.

Katelyn is a cheese enthusiast, indie video game player, and under-$20 wine connoisseur loving life in San Francisco who spends her free time discovering all of the beautifully unique things the city has to offer.