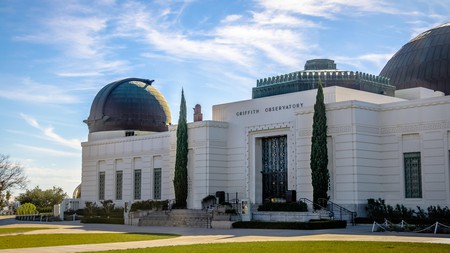 Instead of relying on conventional gatekeepers, people are increasingly asking questions of each other, taking to social media and turning to local apps and services in search of more ephemeral, alternative experiences abroad—things even locals might not know about. 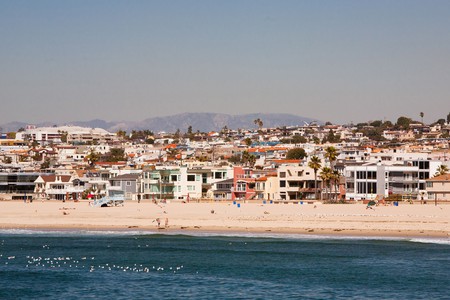 No one wants to feel like a tourist, which is why services that let you assume (at least in some ways) the identity of a local are thriving—and why you’ll hardly ever see someone leafing through a guide book. What better way to get to know a city than by understanding what makes its people tick; where they go to eat, drink, laugh and play, and immersing yourself in that world, if only for a few days.

When it comes to L.A., this is the only way to really get under the skin of this vibrant, sprawling metropolis. Now, with Thomas Cook Airlines flying from Heathrow, Manchester, Bristol and Edinburgh, getting there is easier, more affordable, and more comfortable than ever. Your holiday starts as soon as you board your flight, so use the map below to plan your route, and be ready to L.A. like a local when you land.

Yoga Studio
Facebook
Email
Twitter
Pinterest
Copy link
Share
Map View
This beautiful space in Mid-City is a welcomed reprieve from the L.A. hustle. It was voted by Travel and Leisure as one of the top 10 yoga studios in the world, and it’s clear why. The staff is friendly and accommodating, paper lanterns dot the ceiling and teachers gently nudge you to reach past your limits. There is a strong sense of community and a welcoming vibe; akin to the Cheers of the yoga studios, no matter how many times you frequent, everyone really will know your name and greet you with a smile. You’ll get to participate in some of the most rigorous, playful, cathartic classes you’ll ever take, either inside the lovely indoor studio or the enclosed garden studio. Recommended teachers: Sarah and Noelle.

Shop
Facebook
Email
Twitter
Pinterest
Copy link
Share
Map View
Playclothes not only has a vast assortment of vintage clothes (ranging from the early 1900s through the 1980s) for men and women, but also a great selection of housewares, vintage sewing patterns, furniture, and accessories. Oh, and they have a shop cat who loves making friends with customers.

Shop
Facebook
Email
Twitter
Pinterest
Copy link
Share
Map View
At Manly & Sons Barber Company, you can enjoy a variety of services which implement traditional techniques and place emphasis on attention to detail. The grooming tools used are always the newest and best around. If you show up and ask for the works, you’ll get a full haircut, wash and shampoo, as well as a straight-edge razor hot towel shave. The typical haircut styles offered include buzz cuts, razor fades, and full head shaves, but there are plenty more on offer. This shop has been around since 2014, and now offers locations in both Los Angeles and Portland, Oregon. 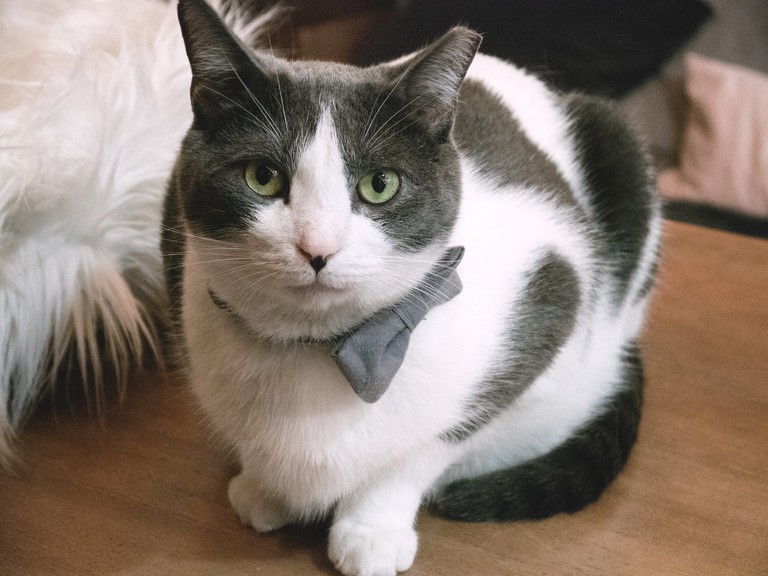 Crumbs & Whiskers combines the universal love of coffee and cats, making for a truly unique cafe experience. Alongside the usual food and drink offerings of a modern day coffee shop, the cosy locale offers patrons the opportunity to play with their feline residents. Crumbs & Whiskers isn’t just another cat cafe, it’s a half way house for cats that have been rescued and are in the process of being adopted. 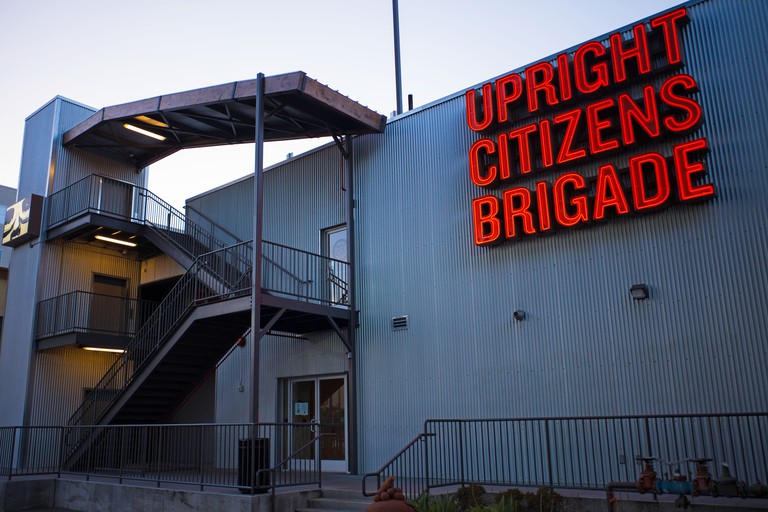 Cafe, American
Facebook
Email
Twitter
Pinterest
Copy link
Share
Map View
If you aren’t much of a cat person, The Dog Cafe’s got you covered—another charitable organization that is both a wonderful cafe and also a perfect opportunity to play with furry friends. Dog Cafe also functions as a shelter for dogs without homes, so if you meet one that you can’t let go, then you can really take the ultimate souvenir home and change a dog’s life! 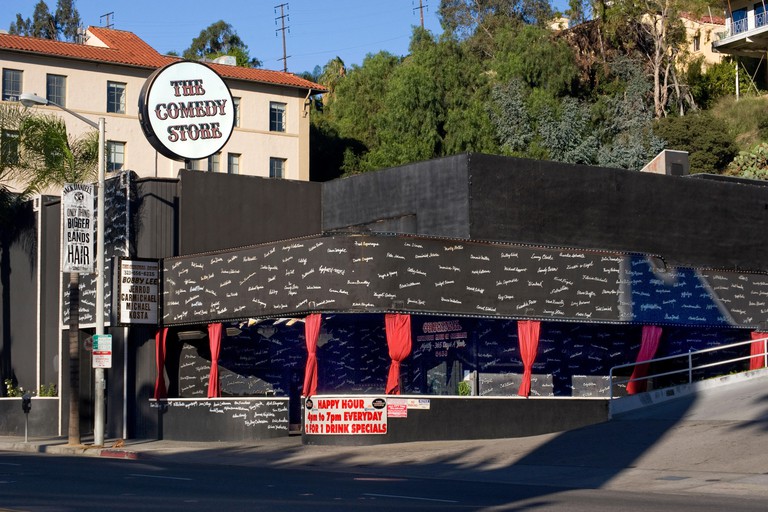 The Comedy Store | © Robert Landau / Alamy Stock Photo
The Comedy Store was first opened by comedian Sammy Shore and his wife Mitzi, parents of Pauly Shore. At the original location on the Sunset Strip, the Belly and Main rooms feature lesser-known talents, while the Original Room hosts frequent visits from nationally recognized comedians. Many famous faces have graced the stage at The Store—Dave Chappelle, Chelsea Peretti, Gallagher, Judy Tenuta, Andrew Dice Clay, Leslie Jones, Andy Kaufman, and Chris Rock, just to name a few. As if your night couldn’t get any better, they even offer discounted parking, which is virtually unheard of on the Strip. 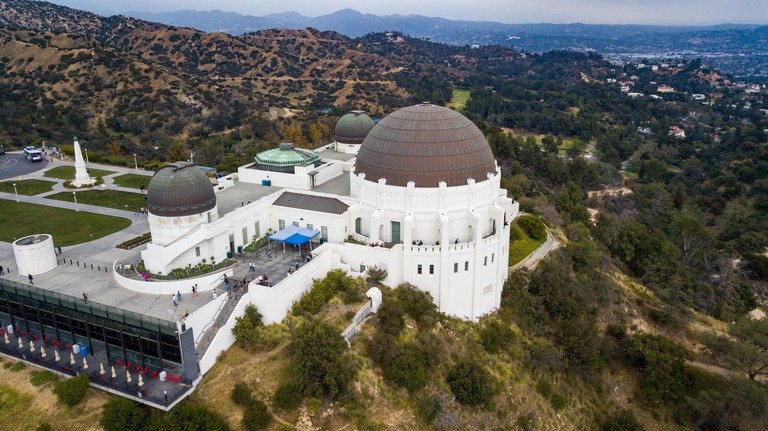 © dbimages / Alamy Stock Photo
Griffith Park offers a variety of activities throughout its 4,300 acres of land. Some of the more popular hiking routes include Griffith Park Drive from the Los Feliz Boulevard entrance; Zoo Drive to the Travel Town Museum; and Crystal Springs Drive to the zoo. Our personal favorite trail is the one that leads from the Observatory parking lot to the summit of Mount Hollywood. The summit is the highest peak in the park and provides views of the entire Los Angeles Basin.

Store
Facebook
Email
Twitter
Pinterest
Copy link
Share
Map View
Owners Liz Tooley and Lance Barresi originally founded the now famous vinyl shop in Chicago before deciding to pick up and move out west. Permanent Records L.A. now offers a hand-picked selection of vinyl releases, both old and new, that caters to the seasoned digger. The records are mostly rock—but good rock. Look out for that one elusive fuzz single that you’ve been looking for all your life. 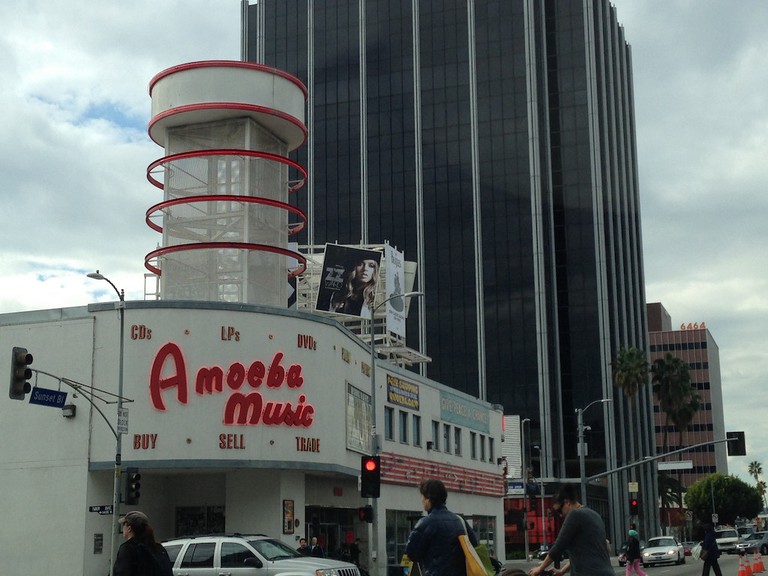 Amoeba Music | © vxla/Flickr
No tour of Los Angeles record stores would be complete without stopping at one of the largest record stores in the world. The selection at Amoeba Records spans just about any form of media related to sound possible, including CDs, DVDs, and cassettes. Amoeba has plenty to occupy even people that don’t know what a record is. 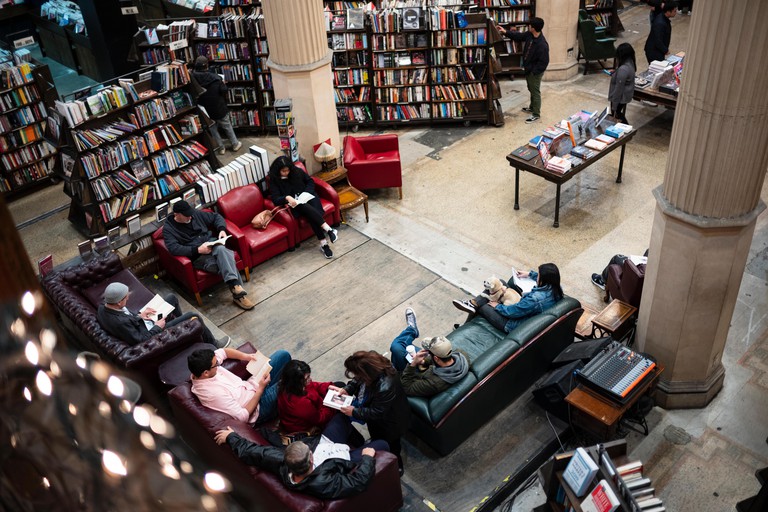 The Last Bookstore, Los Angeles | © Jonathan Cohen / Alamy Stock Photo
This spot is renowned as an enclave for literature lovers, filled with new and used books to please enthusiasts of all genres. There is also vinyl stocked on the first floor, and you can browse through the rotating galleries and craft shops upstairs.

Theatre
Facebook
Email
Twitter
Pinterest
Copy link
Share
Map View
The Vista is a Los Angeles landmark that in less than ten years will be celebrating its hundred year anniversary. It’s located just off Sunset Boulevard, making it a hard spot to miss, and is a prime venue for viewing summer blockbusters and action flicks, all for a relatively affordable ticket price. The Vista presents a very charming and fashionable image of Hollywood’s glory years. Parking is a bit of an issue here, so, if possible, attempt the route on foot.
Give us feedback