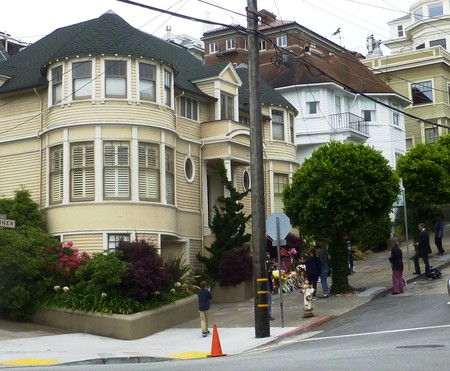 It’s no surprise that hundreds of movies have been filmed in and around a city as beautiful as San Francisco. From dramatic murder-mysteries to hilarious screwball comedies, San Francisco’s movie history highlights the diversity and creativity in the Bay Area.

This beloved identity-swapping movie features Robin Williams as Daniel Hillard, a father who deals with losing custody of his children by pretending to be a housekeeper named Mrs. Euphegenia Doubtfire. After disguising himself as a woman, Hillard is hired by his estranged wife, and hilarity ensues.

Escape from Alcatraz tells the story of Frank Morris, played by Clint Eastwood, who was charged with armed robbery and sentenced to life imprisonment. After escaping from a series of other prisons, Morris is sent to Alcatraz, a maximum security prison from which escape is apparently impossible. This film, which is based on the true story of the escape of prisoners Morris, Clarence Anglin, and John Anglin, provides a glimpse into the history of one of San Francisco’s most popular tourist attractions.

Movie Theater
Facebook
Email
Twitter
Pinterest
Copy link
Share
Map View
Milk is a biographical film that depicts the life of Harvey Milk, the first openly gay individual to be elected to public office in California. Prior to his election, Milk was a resident of the Castro neighborhood in San Francisco. In order to address the violence and civil rights issues against homosexuality, Milk becomes a gay rights activist and then a member of the San Francisco Board of Supervisors. The film honors Milk’s contributions to gay rights and was released around the same time that Proposition 8, a measure to ban same-sex marriage in California, was passed.
Open In Google Maps
San Francisco, California, USA
Give us feedback

Fruitvale Station depicts the fatal January 1, 2009, shooting of unarmed 22-year-old African-American man Oscar Grant by a white police officer after a fight on BART. The heart-breaking film, which is named after the BART station where Grant was shot, portrays Grant as a loving father and boyfriend who is trying to make a better life for himself and his family. Although Grant is not depicted as being entirely flawless, and the film shows scenes of Grant doing jail time for drug dealing, the ultimate goal of the film is to show a more accurate picture of who Oscar Grant was. This event has fueled race riots and debates throughout the country and is a key example of the tension between young black males and white policemen.

Steve Jobs, the co-founder and revolutionary genius behind Apple computers, has often been described as the boss from Hell. His unrealistically high expectations for the people around him led to strained relationships with his family, friends, and coworkers. The 2013 film, which was released nearly two years after Steve Job’s death, stars Ashton Kutcher as Jobs, a Reed College dropout with an idea that would change the world.

The Barbary Coast is a neighborhood that was located in what is currently San Francisco’s Financial District. In the mid-1800s, the city was rapidly growing due to California’s Gold Rush, and many of the Barbary Coast’s residents included criminals, prostitutes, and gamblers. The 1935 film, The Barbary Coast, stars Miriam Hopkins, Joel McCrea, and Edward G. Robinson and shows how their characters navigate the lawless town of San Francisco.

The mystery-thriller Zodiac tells the story of a real-life serial killer who terrorized the Bay Area in the 1960s and 70s. The film’s main character is San Francisco Chronicle reporter Robert Graysmith, who is played by Jake Gyllenhaal. Since Graysmith is a cartoonist for the newspaper, he is not taken seriously by his colleagues when he tries to get involved with the case. Thus, Graysmith is forced to try and identify the Zodiac killer on his own, and creepiness ensues.

The Joy Luck Club, which is based on Amy Tan’s 1989 novel of the same name, presents four mother-daughter relationships between Chinese women and their Chinese-American daughters. All of the mothers live in San Francisco and meet regularly to spend time with each other and tell stories. Throughout the film, viewers learn more about each character and how their lives have been shaped by Chinese and American cultures.

Considered one of the greatest films of all time, The Maltese Falcon is a murder-mystery that involves three different men trying to get their hands on a valuable falcon statue. The main character, Sam Spade, played by Humphrey Bogart, is a private detective hired by a woman named Ruth Wonderly, who claims she’s searching for her sister. This melodrama is full of greed and deceit that will keep you guessing until the very end.

Facebook is one of the biggest players in the tech industry today, but in 2004 it was simply a website operating out of a Harvard dorm room. The Social Network depicts Facebook’s origins, legal battles between founder Mark Zuckerberg and fellow Harvard classmates, and management disputes among Facebook contributors. Although many scenes in the film were set in Boston, the film also portrays the company’s relocation to Palo Alto. This film offers an inside look into the entrepreneurial start-up culture that is currently dominating the Bay Area business world.

What’s Up, Doc? is a hilarious film that stars Barbra Streisand as Judy Maxwell, a young woman followed by disaster wherever she goes. The story takes place in San Francisco, where four different people who all own the same kind of plaid bag spend the night at Hotel Bristol. After a mix-up, all four characters are missing their rightful bag. Although Judy’s bag only contains clothes and a large dictionary, all the other bags are actually quite valuable. Throughout this classic comedy, all four bags are lost and found as various characters try to steal and retrieve a bag that may or may not contain what they’re hoping to find inside.

The 1997 comedy George of the Jungle is loosely based on Tarzan, a story of a man raised by gorillas in the African jungle. The film begins when a San Francisco couple, Ursula Stanhope and Lyle Van De Groot, take a safari in Africa. Lyle and Ursula are separated after a lion tries to attack them, and Ursula is rescued by George, a man who lives in a treehouse with a pack of gorillas. George and Ursula become friends, and after a series of unfortunate events, they wind up in San Francisco where George wreaks havoc on the city due to his uncivilized nature.

Movie Theater
Facebook
Email
Twitter
Pinterest
Copy link
Share
Map View
Based on John Steinbeck’s novel of the same name, Cannery Row is a film about the colorful characters that make up Monterey’s fishing and canning industry during WWI. It stars Debra Winger and Nick Nolte as Suzy DeSoto and Doc, two very different characters who don’t quite fit in with the other inhabitants of Cannery Row. Although the film is not set in San Francisco, it gives viewers a look into what life was like for people living and working along California’s waterfront during the early to mid-1900s.
Open In Google Maps
San Francisco, California, USA
Give us feedback

In 2002, the Oakland Athletics had the third lowest payroll in the MLB, making it difficult to attract big time baseball players to play for their team. In order to get the A’s out of their slump, the team’s general manager Billy Beane re-evaluates the league by analyzing player statistics, or sabermetrics, in ways that had never been looked at before. Despite Oakland’s low budget, Billy Beane’s use of sabermetrics helped the A’s get to the 2002 and 2003 playoffs. The film is based on Michael Lewis’s book, Moneyball: The Art of Winning an Unfair Game, and has led to the wide use of sabermetrics among other teams in the MLB.

San Francisco is a musical drama that depicts the 1906 San Francisco Earthquake. The film stars Clark Gable, Jeanette MacDonald, and Jack Holt. Both Gable’s character, saloon owner Blackie Norton, and Holt’s character, wealthy man Jack Burley, fight for the affection of MacDonald’s character, singer Mary Blake. Soon, tragedy strikes as an earthquake hits San Francisco and the characters must pick of the pieces. This tale of love during a time of tragedy provides a flashback into what life was like in the early 1900s for San Francisco residents.

Although the original novel by Pierre Boileau and Thomas Narcejac, D’entre les morts, was set in Paris, France, Alfred Hitchcock’s film version, Vertigo, was relocated to San Francisco. After developing vertigo, John ‘Scottie’ Ferguson is forced to give up his job as a police detective. In his retirement, Scottie is hired to follow the wife of a man he knew in college, Gavin Elster. The plot thickens after Gavin’s wife commits suicide and may not be the person she said she was.

Susan Blick, a Bay Area native, recently graduated from Colgate University, where she double majored in Environmental Studies and Sociology & Anthropology. As a proud morning person, she lives by Phil Dunphy’s Phil’s-osophy to ‘Watch a sunrise at least once a day.’