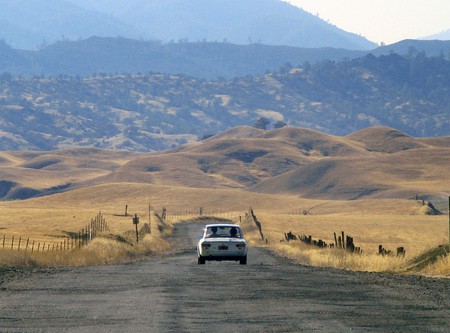 California has had countless songs written about it. But what about songs specifically for Northern California? If you’re heading on a road trip to explore this great region, you’re going to need one epic playlist to get you in the mood for nature, hippies, the Bay, and the beautiful Northern California (NorCal) coast.

“I descended a dusty gravel ridge

Beneath the Bixby Canyon Bridge

Until I eventually arrived

At the place where your soul had died.”

Big Sur on the California coast has inspired many artists. The iconic Bixby Canyon Bridge is the most iconic structure in the area. This melancholy song captures the majestic essence of the bridge and all of Big Sur.

“I Left My Heart in San Francisco” – Tony Bennett

“My love waits there in San Francisco

Above the blue and windy sea.”

“I Left My Heart in San Francisco” is an absolute classic San Francisco song. It becomes even more magical when you get to sing along to it while driving through the City by the Bay yourself.

“Monterey” – Eric Burdon and the Animals

“The people came and listened

Some of them came and played

Others gave flowers away.

Yes, they did, yeah,

In 1967, British band Eric Burdon and the Animals performed alongside other music legends during the Monterey Pop Festival. Artists such as The Who, Janis Joplin, Ravi Shankar, and Jimi Hendrix were among those playing at the event, which moved the British Band so much that they wrote a song about it. This tune is perfect for NorCal outsiders looking to gain perspective on the wonder of Monterey.

“I lost my head in San Francisco

Waiting for the fog to roll out

But I found it in a rain cloud

It was smiling down

Let it pour out of your soul.”

Hippie culture thrives all throughout NorCal, especially in San Francisco. The Mowgli’s let you peek inside this generation’s hippie culture. Contagiously good vibes run throughout the entire song!

“I ain’t seen the sunshine since I don’t know when.

I’m stuck in Folsom Prison, and time keeps draggin’ on.”

Folsom State Prison, located in Folsom, is one of California’s oldest prisons. While the one and only Johnny Cash didn’t actually spend any time in the prison, he wrote this song about it, creating a classic outlook on life in NorCal.

“Save Me San Francisco” – Train

“Every day’s so caffeinated

I wish they were Golden Gated

So wrap me up, return to sender.

Let’s forget this five-year bender – take me to my City by the Bay.”

Rock band Train loves to sing about the greatness of NorCal. If you’re looking to hear a song that names specific locations, mannerisms of locals, and the best San Francisco activities to experience, Train has your back.

“We should move to Sausalito

Living’s easy on a houseboat

Let the ocean rock us back and forth to sleep

In the morning with the sunrise

Look in the water, see the blue sky

As if heaven has been laid there at our feet.”

Singer Conor Oberst captures the relaxed lifestyle of Sausalito, a town right outside of bustling San Francisco. This song gets you ready to sit back and lounge once you reach NorCal.

This song is another one to get you pumped up to experience the laid-back way of life in the area. The beautiful oceanic town of Mendocino is the ultimate NorCal coast experience.

“Sittin’ in the morning sun,

I’ll be sittin’ when the evening comes.

Watching the ships roll in,

Then I watch them roll away again.”

If you are still not convinced of NorCal’s laid-back culture, here’s one of the most popular songs inspired by the area.

“If you’re going to San Francisco

Be sure to wear some flowers in your hair

If you’re going to San Francisco

You’re going to meet some gentle people there.”

Make sure to take this 1967 advice about how to prepare yourself for a visit to San Francisco. It still rings true today. (You can pick your own flowers along the way.)

“Ran out of time and money, looks like they took my friends.

Lodi is one of the region’s most agricultural cities. It’s beautiful and full of nature. Unlike this song though, you’d be happy to get stuck here.

There’s plenty of gold in the world, I’m told,  on the banks of the Sacramento shore.”

Although the title is “California,” Dan Zanes’ song encompasses the simple and lovable qualities of Sacramento. The city was a major part of the historic Gold Rush, so the song pumps you up for mining gold in Old Town Sacramento. It’s also the state’s capital, which, when adding that to the context of the song, makes it even more enjoyable.

“In the city of the future, it is difficult to find a space.

Radiohead could not be more right about the futuristic tech city of Palo Alto. It’s here where innovation, creativity, genius, and overpriced property awaits.

Lettin’ your old man down

The lyrics itself sound a little contradictory, but this is a great way to get into the mood of escaping city life.

“Retreat and live off the land, all around Ukiah.”

Ukiah is one of the most off-the-beaten-path places in NorCal. Jam to this song as you make your way to the tiny town way up the coast. Here, you’ll truly experience the differences between remote NorCal and the always moving Southern California.

Where the warm sun shines

Though you’re far away

Your love is here today.”

The love that flows through NorCal will stick with you long after your road trip. The region will always keep on keeping on, as this song implies.