14 Free and Cheap Date Ideas to Try in Los Angeles 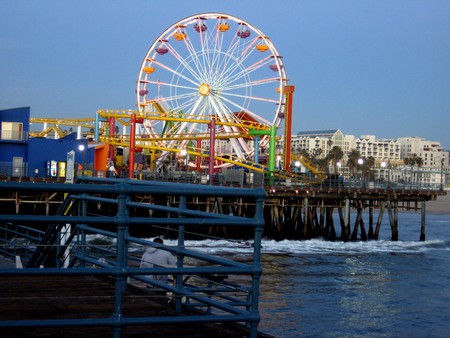 Los Angeles may be famous for many things—glitz, glamour, and fame itself—but affordability isn’t one of them. But if you’ve got a date in L.A. without a lot of cash on hand, there are still countless ways to impress. Here are 14 cheap dates that will leave you both feeling like a million bucks.

As one of the most fitness-obsessed cities in the world, there’s a good chance that your date will appreciate the suggestion to get to know you while keeping fit on Los Angeles’ miles of mountainous trails. Some of the most scenic views of the city (and the Hollywood sign) can be had from the Runyon Canyon trail. For couples closer to the Westside, the trails in Topanga State Park afford breathtaking views of the Pacific Ocean from certain vantage points. And although a pre-brunch Sunday hike is an L.A. classic, elevate a date to the next level by suggesting a sunset hike so that, together, you can watch the city blink to life below you. 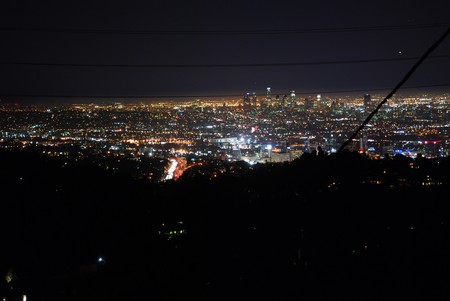 The view from Runyon Canyon at night | © Ben Godfry/Flickr 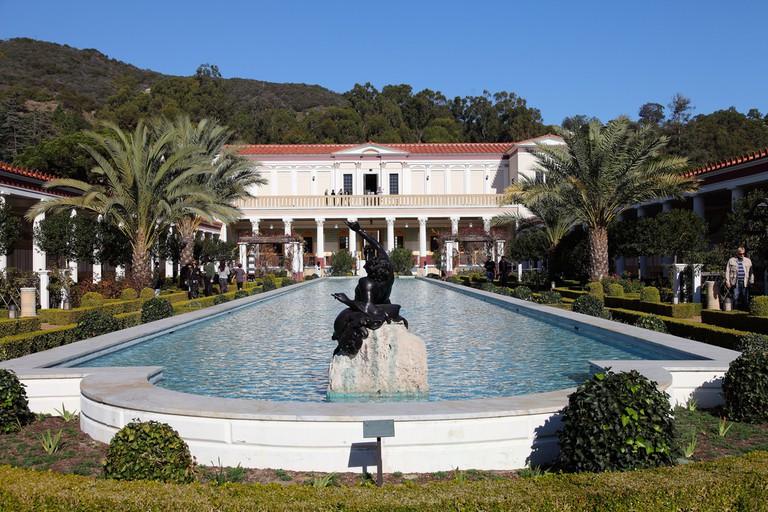 Getty Villa | © CheWei Chang/Flickr
If whisking your date away to Tuscany isn’t in quite within your budget, don’t fret because there is the Getty Villa, built by oil tycoon J. Paul Getty to house his collection of ancient Greek, Roman, and Etruscan antiquities and designed in exact imitation of a villa in the shadow of Mount Vesuvius. The artifacts and the meticulously landscaped grounds overlooking the ocean are worth a wander on their own, and on summer evenings, free performances of Shakespeare plays and Italian operas light up the night. Admission is always free, but parking is $15. Perched on a cliff off the side of the Pacific Coast Highway, you’ll need to drive there.
Open In Google Maps
17985 Pacific Coast Highway, Pacific Palisades, Los Angeles, California, 90272, USA
+13104407300
Visit Website
Give us feedback

Book Now
Don’t be fooled by the Huntington Library’s name—a visit to this destination offers so much more than books to impress your date. (Although showing your date the library’s Gutenberg Bible and the earliest known edition of The Canterbury Tales can’t hurt.) But to really up the romance, take a stroll through the 207 acres of gardens that the property has to offer. From a rosebush-lined English garden to a Japanese botanical layout, the grounds have something to enchant just about everyone. Admission is free the first Thursday of the month, and $25 all other times.
Open In Google Maps
1151 Oxford Road, San Marino, California, 91108, USA
+16264052100
Visit Website
Give us feedback 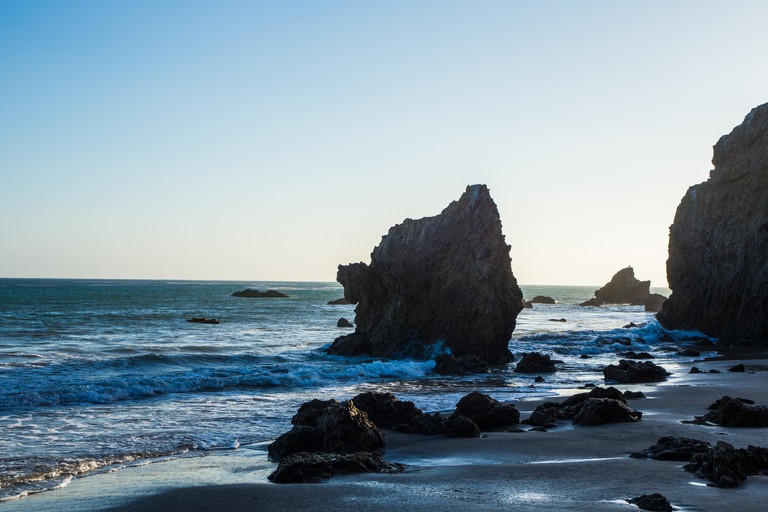 El Matador State Beach I | © Vinh tran/Flickr
Perched on the northern end of Malibu, El Matador State Beach is one of L.A.’s longest, with miles of dramatic coast and cliffs. After a long walk on the beach, head to nearby Neptune’s Net, a dive bar and seafood joint that has been serving devotees for years, with past famous patrons including Elizabeth Taylor and Frank Sinatra.
Open In Google Maps
Los Angeles, California, USA
Give us feedback 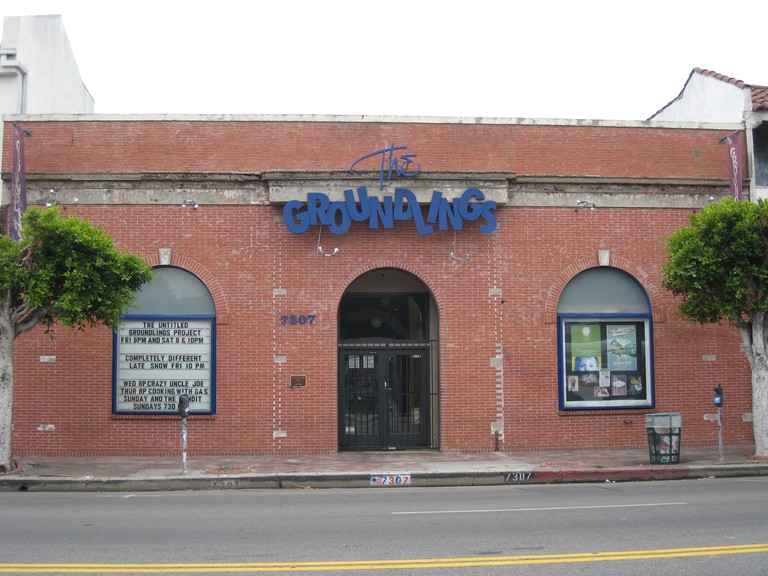 The Groundlings | © Gary Minnaert / WikiCommons
With alums like Will Ferrell and Conan O’Brien, this intensive improvisational and sketch comedy training ground in Hollywood has performances with students in its advanced classes that will have you laughing so hard that you’ll swear they’re pros. And sometimes, they just might be: alum Kristen Wiig is known to sneak on stage some nights to perform. General admission tickets are just $12.
Open In Google Maps
7307 Melrose Avenue, Fairfax, Los Angeles, California, 90046, USA
+13239344747
Visit Website
Give us feedback 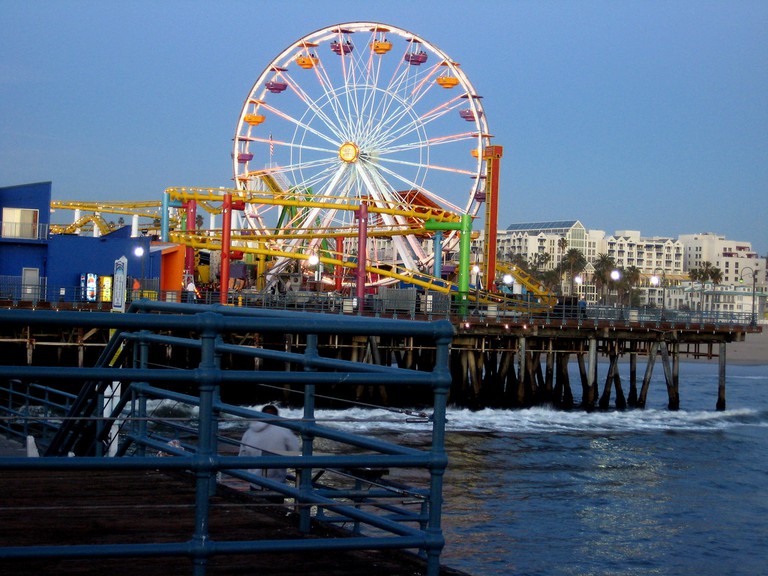 The Santa Monica Ferris wheel | © Matthew Bietz / Flickr
It doesn’t get much more romantic than ascending above the pier on an enormous Ferris wheel overlooking the ocean. While romantic at any time of day, the scene is especially stunning at sundown, so if you time things right, you can give your date a sunset they’ll never forget, with nothing but the shimmering Pacific in sight. Stroll along the boardwalk after and try your hand at arcade games after fish, chips, and a beer.
Open In Google Maps
380 Santa Monica Pier, Santa Monica, California, 90401, USA
+13102608744
Visit Website
Give us feedback

If your date loves music, there’s arguably no better place you could take them than the giant Amoeba Music store on Sunset. Thousands of records, videos, and CDs cram the aisles, which you can browse together. Up-and-coming local acts and marquee names alike fill a jam-packed live show series at the store, which are completely free.
Open In Google Maps
6200 Hollywood Boulevard, Central LA, Los Angeles, California, 90028, USA
+13232456400
Visit Website
Give us feedback

It may be unconventional to suggest a government building as a hot date spot, but suspend your disbelief and whisk your date up 27 floors to the top of the tallest building in L.A. and prepare to be awestruck by the sweeping views of the city in every direction. Even better than the view? The fact that admission is free. After taking in the sights, head down to solid ground and stroll through nearby Grand Central Market, where you can brunch on everything from paella and wiener schnitzel to the famous EggSlut.

Stroll through a farmers’ market with your date on a Sunday morning, stopping to get coffee, crepes, and fresh blueberries. If you’re feeling particularly romantic, any L.A. farmers’ market will afford you the opportunity to buy a glorious bouquet of flowers for less than $10. West Hollywood has an especially quaint farmers’ market, which takes place on picturesque Melrose Place. And if you’re in Santa Monica, buy provisions at the market and head to the beach nearby to enjoy an al fresco picnic. 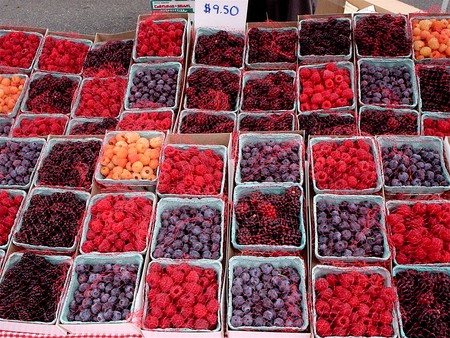 Drive along the Pacific Coast Highway 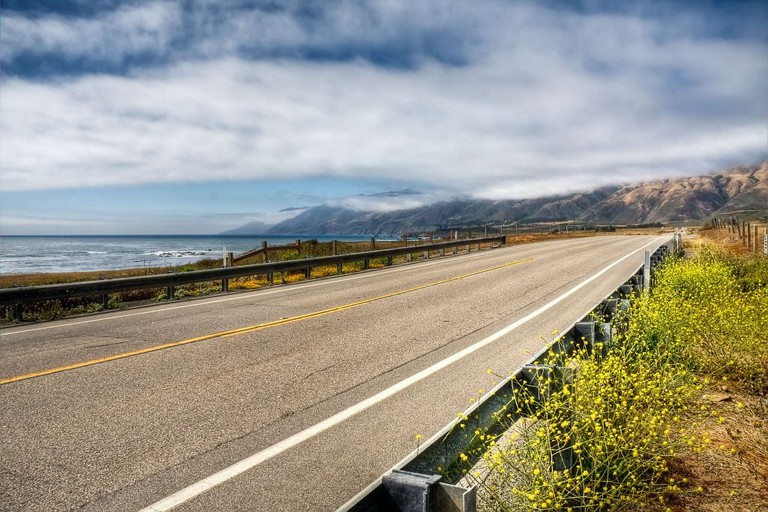 The Pacific Coast Highway | © Ryan Castillo / Flickr
Frequently voted one of the most scenic drives in the world, a drive along the Pacific Coast Highway is sure to take your date’s breath away. With miles of incredible cliffs and coastline heading towards Santa Barbara, there are countless places where you can stop along the way to snap selfies and take in the views. Also, don’t forget to get the world-famous breakfast burritos at Lily’s on your way out of Malibu.
Open In Google Maps
Los Angeles, California, USA
Give us feedback 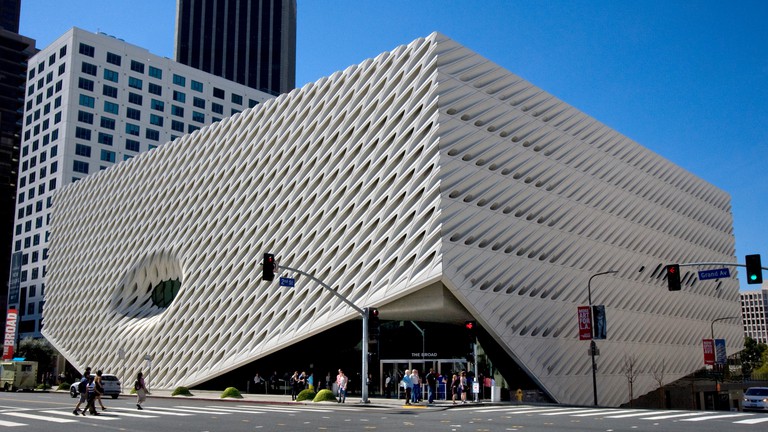 The Broad Museum stands in Downtown Los Angeles | © Robert Landau / Alamy Stock Photo
A visit to the incredible The Broad Museum in Downtown L.A. is sure to impress your date and give you plenty to talk about. Established by the famed contemporary art collector Eli Broad to house his astonishing collection, the artistic immersion begins before you even go in, as you approach the Diller Scofidio + Rendro-designed building, which looks like an enormous honeycomb. The collection itself is a tour de force of contemporary art, including video, installation, photographic, and lithographic works, in addition to a Yayoi Kusama Infinity Room—the place to go in for the kiss, if there ever was one.
Open In Google Maps
221 South Grand Avenue, Downtown Los Angeles, Los Angeles, California, 90012, USA
+12132326250
Visit Website
Give us feedback

Museum, Natural Feature
Facebook
Email
Twitter
Pinterest
Copy link
Share
Map View
Whether the La Brea Tar Pits are an archaeological marvel or simply an oddity of nature is up to interpretation, but whichever you think, they are a unique, and free, place to take a date. You’ll get to see asphalt seep and bubble up through cracks in the earth, as it has been doing for 65 million years, and watch a team of archaeologists at work excavating fossils. If you’re lucky, they’ll discover the remains of a wooly mammoth while you’re there, like they did in 2006. Afterward, you can grab dinner at one of the famed food trucks lining Wilshire Boulevard—El Chato Taco Truck draws crowds in from near and far for their award-winning tacos, quesadillas, and burritos.
Open In Google Maps
5801 Wilshire Boulevard, Central LA, Los Angeles, California, 90036, USA
+12137633499
Visit Website
Give us feedback
Book Now

Go to an author reading and signing at Book Soup

Your intellectual date will no doubt be impressed by an outing to the beloved Book Soup, a local institution and the largest independent bookstore in Hollywood. With an impeccable and sprawling selection of fiction, non-fiction, coffee table books, and magazines, the shelves are sure to hold something for everyone and spark a conversation you can continue long after you leave. Pulitzer Prize-winning authors come by to read from their books—snag your date a signed copy for a souvenir of a night to remember.

Dinner at the Original Farmers Market at the Grove

Your date will not want for options as you stroll among the stalls at the Farmers Market at the Grove. While technically a shopping mall, the open-air Farmers Market feels more like a Middle Eastern souk, albeit one that offers everything from sushi to burgers to Singaporean cuisine served on a banana leaf. And not a single stall should cost you more than $20 for a full tray of food. And a smattering of tables underneath trees festooned with twinkling lights affords ambiance to spare.