10 Works Of Art At LACMA You Can't Afford To Miss 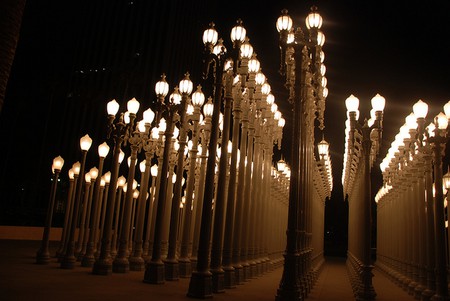 In case you haven’t noticed, Los Angeles is brimming with exhibition spaces. LACMA is home to 100,000 works of art, cementing it as the largest museum in the western United States. The museum opened in 1965 and focuses on the expanse of art history and the globe. Where to start? We profile ten must-see works at LACMA.

Picasso painted this in 1937 in Spain after completing his famed work Guernica, which was in protest to the Spanish Civil War. After that, Picasso shifted his style of painting to surrealism but continued to paint the weeping woman frequently. The woman captured does not only represent his personal turmoil, with many believing it is a portrait of his lover and mistress Dora Maar, but also represents a victim of the war – a wife and mother left in agony by destruction. The painting is incredibly powerful as well as thought-provoking. The museum has a wide variety of Picasso’s works on display from several different periods, so you can explore the collection of this great artist. 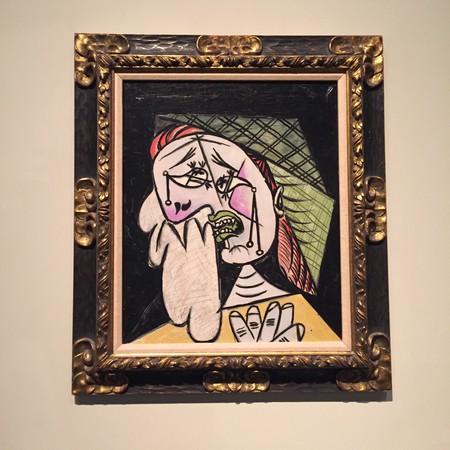 Shiva the Destroyer and Restorer is one of the three Hindu gods. The others include Brahma the Creator and Vishnu the Preserver. Shiva is widely popular and worshipped throughout southern India. Shiva is also known as the patron god of yoga and cosmic dance who created the universe in continuous rhythmic cycles. In this depiction, Shiva dances around a flame rising from a lotus pedestal thought by many to be a symbol of creation. The sculpture has become symbolic of Indian civilization. The work captures Shiva’s grace and divine unity. The sculpture can be found on the fourth floor of the Ahmanson Building, and upon viewing it up close it is easy to see the powerful significance this sculpture has had on Indian culture, as well as why the piece is celebrated around the world. 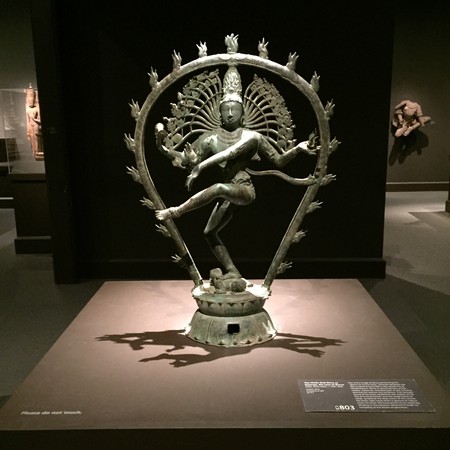 This painting is easy to find in the gallery because it quite simply demands your attention. Suddenly you’re so captivated by the stark image it is hard to look away. Eakins in considered one of the great realist American painters of the nineteenth century, and it is easy to see why. The painting looks like it is taking place in front of you with two wrestlers intertwined amidst a match. The goal in many of his works was to capture the ‘heroism of modern life,’ and he would often spend hours creating these moments. He would often have two athletes wrestle for him and then work out which position he found most stylistically interesting. This painting is also his last completed on the subject of the human form and was finished toward the end of his career. It is thought to be representative of his own frustrations with life. The painting is certainly awe-inspiring. Who knew that wrestling with one’s demons could be so beautiful? 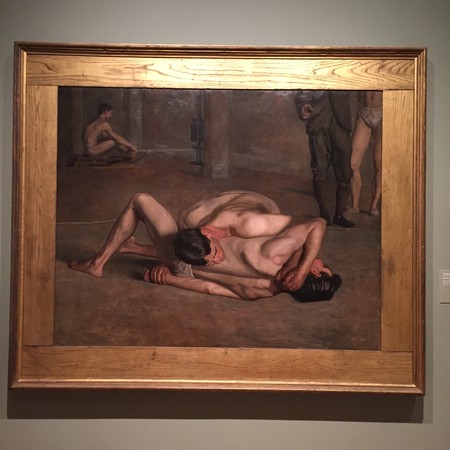 This sculpture is unique not only for the design elements in Alexander Calder’s Three Quintains work, but also because the piece was created for the museum. Before the museum opened, a committee was formed to acquire a fountain sculpture for the location. The museum offered the commission to Calder, who agreed in June of 1964. Laurelle Burton, who was the president of the Art Museum Council at the time, said, ‘To have a man of Alexander Calder’s prominence be the first to design a sculpture specifically for the new museum would set the standards for future efforts, on the part of the artists and donors.’ The fountain is comprised of simple geometric forms, which is characteristic of Calder’s style, floating in the air and propelled by water jets. The piece is one of the few fountain sculptures Calder ever created. The work is on permanent display in the Director’s Roundtable Garden.

Diego Rivera certainly needs no introduction. His paintings, in a variety of mediums, including watercolor and oil, are world-renowned. This painting is a must-see work! The focal point of the painting is the seller of calla lilies. The flowers are viewed from above, which is a unique perspective. Also the composition of the of the piece is interesting because the figures are block-like in style which is a technique that Rivera honed from his cubist painting earlier in his career. After winning first place in the First Pan-American Exhibition of Oil Paintings in 1925, it was obtained by LACMA’s parent institution the Los Angeles Museum of History, Science, and Art. 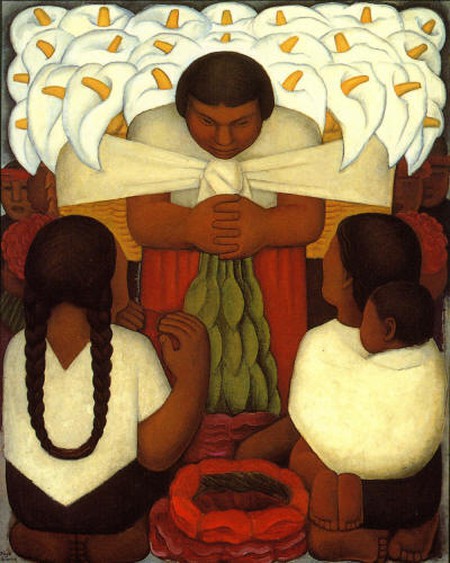 Part of LACMA’s exhibit, Islamic Art Now – Part 2, this ceramic piece dates back to the 15th century. The exhibition as a whole focuses on the blend between past and present art in a variety of mediums and themes. This tile belongs to the Timurid rule in Iran and Central Asia. The Timurids sponsored buildings often adorned with decorative tiles such as this one. Pieces of the tile were cut from different sets of tiles, with an array of different colors, to create a mosaic that would join others in creating a complex design on the outside of the structures. What is most striking about this piece is that despite the age and wear of the tile, the colors of the time still remain vivid. 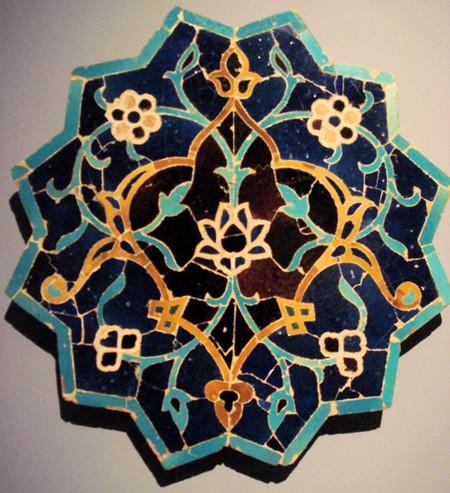 Not only is this painting considered one of René Magritte’s surrealist masterpieces, it is also highly recognized as an icon of modern art. Surrealism was a style of art that heavily drew its influences from Freudian psychology. It symbolized a reaction against ‘rationalism,’ which many believed contributed to World War I. His word-image paintings are his examples of the impossibility of combining words with images and objects. Magritte had worked in advertising, as well as being an artist, and the painting at first appears to be simplistic – almost selling the pipe depicted in the piece. However, underneath the words read ‘this is not a pipe,’ which is at first confusing. The complex element is that a painting of a pipe is not actually a pipe itself, but merely a depiction of a pipe. His use of text in his paintings would go on to influence a generation of concept-oriented artists including: Jasper Johns, Roy Lichtenstein, and Andy Warhol. 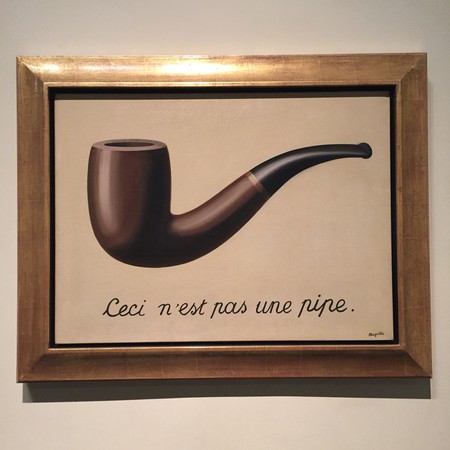 Paul Cézanne is known as one of the legendary post-impressionist painters of the 19th century. His paintings include a variety of subjects from landscapes to portraits and still lifes. His iconic paintings of different table settings are immediately recognizable in and out of the art world. Cézanne used vivid colors and brush strokes to capture the intensity of the images, which is exemplified in this painting. The points of view in the painting are varied. The cherries are viewed from an above focal point, while the peaches, despite their close proximity, appear to be viewed more towards a side angle. The glass and sheet accompany the table setting and are realistic yet more abstract at the same time, which is typical of post-impressionism. This piece is a classic example of the captivating style of Cézanne and a must-see painting in its own right. 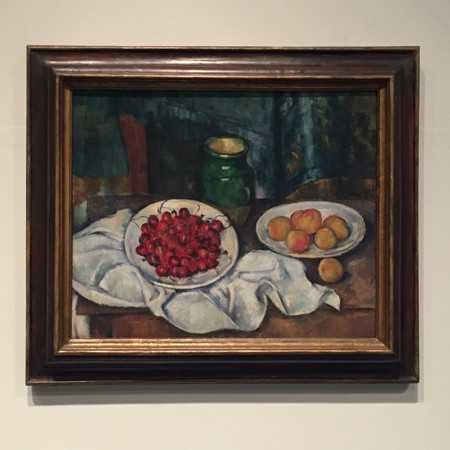 Roy Lichtenstein is one of a group of artists who used commercial imagery in their work and transformed it. These styles became known as Pop Art and came into vogue in the 1960s. The use of bold colors and lines create comic strip-type imagery. The precise drawing also lays flat on the canvas, purposely lacking the use of dimension. Also, the juxtaposition of the text in the piece saying ‘Hello’ with the back-facing woman creates an interesting dynamic. Using the style known as Ben-Day (printer’s) dots, which is a mechanized process used in the production of comics, Lichtenstein creates the woman’s skin with a handmade interpretation of the technique.

The large-scale assemblage sculpture between Wilshire Boulevard and the entrance to LACMA is now a well-associated visual with the museum. It is hard to believe that the piece didn’t exist before 2008. The installation consists of two hundred and two restored street lamps from the 1920s and 1930s, many of which used to light the streets of Southern California. The style of the lamps ranges depending on the original location for which they were commissioned, but they are now painted in a uniform gray and assembled to create a forest-like area of light. The lights are solar-powered and turn on every night. This piece is not only an incredible experience, but Burden has also created a work that has become synonymous with the museum and Los Angeles as a whole.