10 Things You Should Know About The Haas Brothers 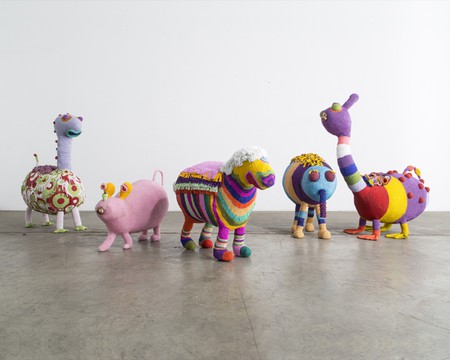 In the last six years, LA-based twins Nikolai and Simon Haas have taken the design world by storm. As the sort-of Lewis Carrolls of contemporary craftsmanship, the Haas brothers have become well-known for their provocative, biomorphic, colorful, and insanely imaginative furniture, ornaments, and commissioned artistry. Here are ten things you need to know about the unstoppable creative duo.

1. For the Haas brothers, art is a family affair

The Texas natives were born into a family of creative professionals. From a very young age the boys’ mother, Emily Tracy, an established screenwriter, and their father Berthold Haas, a painter and sculptor, encouraged Nikolai, Simon and their older brother Lukas (who went on to become a successful actor) to embrace and experiment with beauty — whatever form it might come in. The boys often credit their parents for the aesthetic philosophy that has influenced their stylistic decisions as designers. Furthermore, growing up as twins often meant working on projects with their family, especially their father who not only trained them to be master stonemasons but also taught them different aspects of construction that greatly contributed to their capacity to expertly paint, shape and mold various materials. 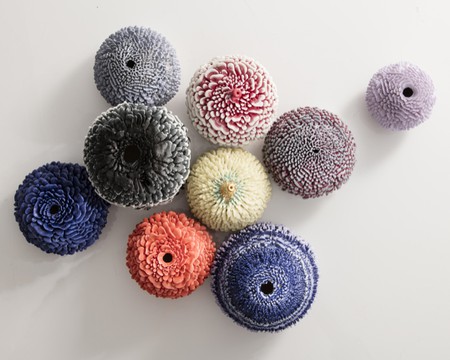 2. Nikolai and Simon are renaissance men

Its not surprising the Haas brothers’ creatively supportive upbringing allowed them to flirt with a diverse array of professional fields. Because their mother and brother often worked in Hollywood, the boys were constantly introduced to unconventional creative types that showed them that their boundaries were limitless. As a result, before they were a famous design team, Nikolai and Simon pursued many other interests. Simon tried his hand at dance, culinary art, and painting, while Nikolai followed his passion for music, touring with the band RRIICCEE, and later delving into construction management. It wasn’t until 2010 that the brothers settled into furniture design, although their dabbling continues and they are always striving to expand their brand.

It was actor Tobey Maguire that first recognized the Haas brothers’ design talent and put them to work. In 2010 the movie star reportedly invited the twins to sit in on a meeting with the architectural firm Johnston Marklee and present ideas for his office renovation. The impressed architectural firm quickly agreed to collaborate with Nikolai and Simon and thus the twins made their first set of furniture for Maguire. They used the money they earned from the project to open the Haas Brothers design studio in L.A. 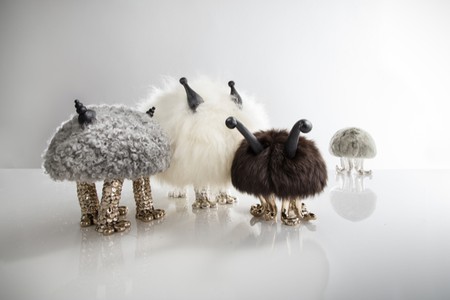 4. The Haas brothers have famous clientele

Following their breakout in 2010, the Haas brothers landed a flood of high-profile gigs. In 2012 Nikolai and Simon were commissioned to design masks for Lady Gaga and were enlisted by American architect Peter Marino to collaborate on outfitting Maison Louis Vuitton Shanghai. In 2013, they began working with legendary Italian fashion designer Donatella Versace, producing an assortment of accessories, like slick brass and black leather furniture and bold, bright animal printed clothing pieces. The following year, the creative director of an interior design firm in Los Angeles, Roman Alonso, recruited the Haas brothers to decorate the lobby of the brand new L.A. Ace Hotel. Beyond Lady Gaga, Louis Vuitton, Versace, and Roman Alonso, the Haas brothers continue to work with renowned artists and patrons from all over the world.

5. Some of their chairs are adorned with brass testicles

Sex, humor, and nature are the underlying themes present in all the Haas brothers’ works. While some of their pieces play with sexual innuendo, many are explicitly and unforgivingly uncensored displays of genitalia. In 2014, the brothers featured, ‘Advocates for the Sexual Outsider,’ at Design Miami/Basel. The collection featured a ‘sex room,’ complete with a vermiculated leather entrance in the shape of labia and large brass, ‘dong lamps.’ The purpose is not to cause offense; instead the brothers have cultivated and instilled in their art a Haas-ian philosophy of acceptance, compassion, and commonality. They attempt to breakdown repressive societal barriers by using their flamboyant and overtly erotic designs to make people laugh and make light of a subject that is often deemed taboo or inappropriate. The Haas brothers view sex as something that everyone has in common and therefore everyone can have a conversation about. In this way, their art is really about bringing people together to challenge what’s ‘unacceptable.’ 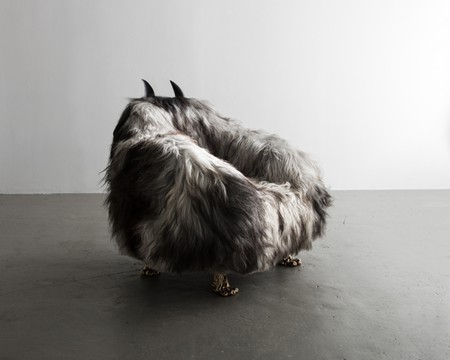 6. They have a high-profile clientele because that’s who can afford their work

Nikolai and Simon’s elaborate furniture and décor come with hefty price tags. According to the website ‘Artsy,’ the Haas Brothers’ ‘Stone Gold Steve Austin’ Hex coffee table (2015) is priced between 75 and 100 thousand dollars, and a ‘Melty Accretion Vase’ (2015) runs between five and seven thousand dollars. While this may seem like a ludicrous amount of money for a coffee table or vase, their work is expensive for a reason. Nikolai and Simon use various raw, quality materials like resin, metal, clay, iron and many others to craft unique and meticulously detailed pieces. Some creations can take the boys and their crew thousands of dollars and weeks of hand labor to construct and perfect. The intricacy and gracefully fluid asymmetry of their designs are the result of a process that takes an extraordinary amount of dedication, time, and care (that might make the price tags sound a little less outrageous). 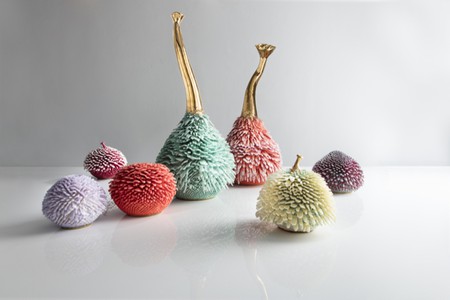 While not entirely co-dependent, the Haas twins have a magnetic and symbiotic relationship through which they are able to bring out the best in each other. There is no sense of sibling rivalry or conflict between the two. In fact, they often comment that their complementary personality traits and contrasting talents have made them the ideal work partners; where Simon is obsessively technical, precise, and analytical, Niki is expressive, abstract and freethinking. The combination of their dispositions results in beautifully calculated works that are both skillfully crafted and full of life. 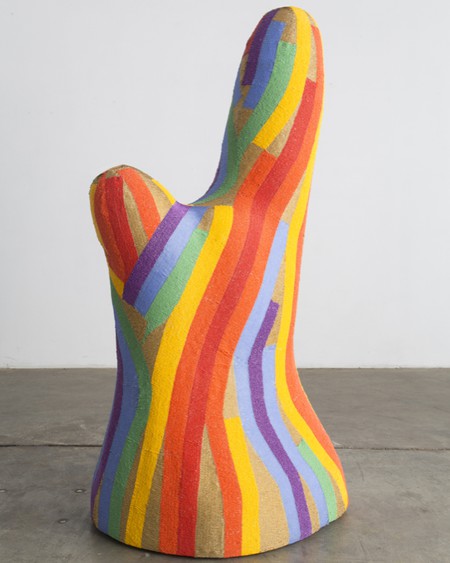 With Los Angeles’ extensive art and culture scene, its no wonder the LA transplants established their design studio in downtown Los Angeles. Not only has the city’s design history, open landscape and energetic vibe served as a stimulus for the Haas brothers, the twins have maintained that the eclectic community has been nothing but supportive and encouraging — an aspect they found lacking from other art capitals, such as New York. It was the wild, warm spirit of Los Angeles that Nikolai and Simon attempted to capture in their celebrity portraits (including a bald Britney Spears) and whimsical line-drawings sprawled over the Ace Hotel lobby in 2014. As maverick artists and LA Kings fans (Nikolai especially), the boys seem to fit right in. 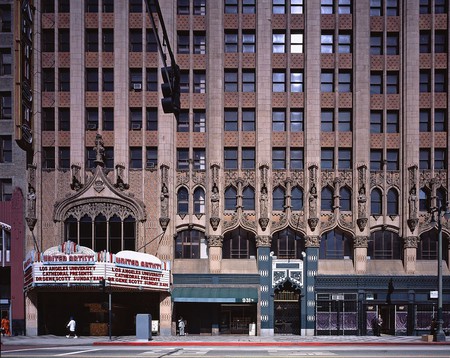 9. Nikolai and Simon have South African associates known as the Haas Sisters

In 2015 the Haas brothers, in collaboration with a group of South African artisans, debuted ‘Afreaks, a critically acclaimed collection of vibrant, playful biomorphic sculptures and decorative pieces laden with masterful beadwork. The project began a few years earlier after Nikolai and Simon discovered the South African female collective of bead workers, known as Monkeybiz, selling tourist trinkets. The boys were so taken by the collective’s skill that they decided to temporarily move to South Africa to work with these women. The team effort resulted in a fantasyland of colorful peculiarities and the women from Monkeybiz began to proudly call themselves the Haas Sisters. 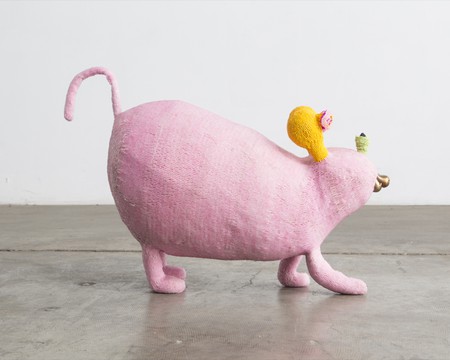 10. Many of the Haas brothers’ pieces have comical names

If the twins’ ideology of aesthetic humor isn’t obvious by looking at their work, it is made painstakingly clear from the titles of their pieces. The Haas Brothers have a beaded sculpture named ‘Tail-or Swift Butt,’ a ceramic object called, ‘Beyoncle’ Accretion,’ and a sheepskin and bronze seat named, ‘Drew Hairy-more,’ just to name a few. The clever puns on celebrity names are just another way the Haas brothers use humor to make their work more accessible. 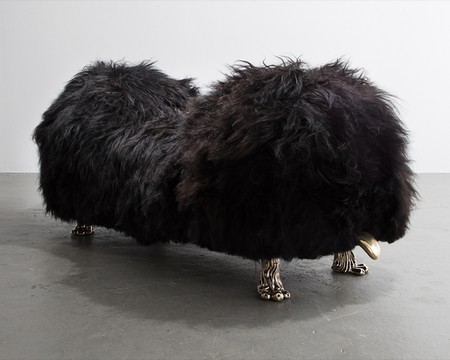