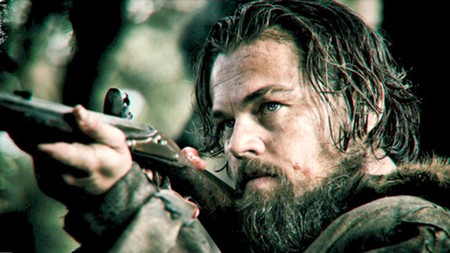 Even though Leonardo DiCaprio is up against some stiff competition, The Revenant seems to be stirring up a great deal of Oscar buzz, in particular for his nomination for Actor in a Leading Role. The film was his toughest challenge to date; sleeping in an animal carcass and eating wild bison liver are only two of the really gross – and impressive – things he did to get a good shot. Here are 10 Leonardo DiCaprio films that probably deserved an Oscar before The Revenant.

Starring alongside a young Johnny Depp, an even younger Leonardo DiCaprio played Depp’s mentally challenged brother Arnie, who enjoys snapping off the heads of bugs in the letter box, and climbing the town’s water tower. The film’s most distressing scenes are driven by DiCaprio; for instance, Arnie often repeats things that Gilbert has said and gets overenthusiastic. In one particular scene he screams ‘dad’s dead’ excitedly over and over whilst slamming his fists on the dinner table, which sends his mum into a fit of rage. This is therefore one of Leo’s most impressive characters due to his realistic mannerisms of a person with a developmental disorder; it demonstrates the range of his acting abilities when he was only a young actor. The academy honored him with the only nomination for the film; best supporting actor. He lost out to Tom Lee Jones as a US Marshal in The Fugitive.

Of course, DiCaprio’s depiction of Romeo in Baz Luhrmann’s modern adaption of the classic Shakespearean romantic tragedy could not be left out of this list. Claire Danes and DiCaprio were a picture-perfect image of the star crossed lovers. Fresh-faced and captivating, DiCaprio brought the intensity of emotion required of this heart-driven, brash and compulsive classic character. In this role DiCaprio proved his capabilities as a male romantic lead; in beautiful scenes like when Romeo and Juliet first meet and curiously gaze at each other through a fish-tank, or in their devastating death scene, surrounded by hundreds of candles, even as a young man DiCaprio proved himself to be an actor to watch. Sadly, he wasn’t nominated for an Oscar or even a Golden Globe. 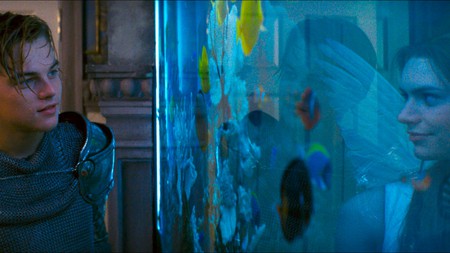 This list would be nothing without DiCaprio’s depiction of Jack Dawson. His performance alongside Kate Winslet was spectacular; his fun-loving, charming, witty, and inspiring Dawson carries the beautiful love story amidst the heartbreaking and devastating context. This is an unforgettable performance that sweeps you away, and DiCaprio once again displays his talents as a romantic lead. Jack holding Rose up at the front of the ship so that she can feel like she is flying is just one of the many scenes in Titanic that have become iconic. It is DiCaprio’s emotional depth as Jack Dawson that makes this performance so memorable; in both the romantic scenes and in the traumatic scenes where the ship fills with water, DiCaprio’s performance is phenomenal. Until the release of Avatar, Titanic was the highest-grossing film of all time. It received thirteen academy nominations and won eleven of them – becoming one of biggest academy award winners of all time. Poor DiCaprio wasn’t even nominated, while his co-star Kate Winslet won her only Academy Award to date. 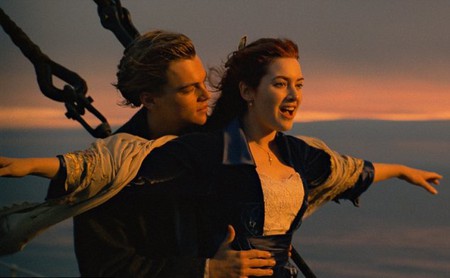 Catch Me if You Can is a wonderful film based on the true story of the life of Frank Abagnale Jr, who fraudulently posed as a pilot, a doctor and a lawyer, and made millions of dollars whilst he was a just a teenager. DiCaprio shines alongside the spectacular Tom Hanks – an incredible feat – and portrays Frank as he is pursued by FBI agent Carl Hanratty (Hanks). Frank is clever, charming and misunderstood; DiCaprio’s character uses his wit to get away with his cons, with one of the funniest scenes being where he convinces Hanratty that he is a Special Agent who is collecting evidence on the fraudster, and manages to escape before Hanratty realises he’s been duped. DiCaprio was nominated for a Golden Globe but only his on-screen father, Christopher Walken was nominated for Best Supporting Actor at the Oscars. 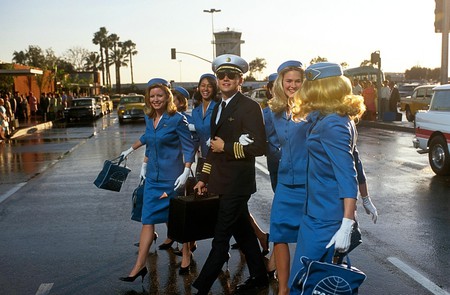 Catch Me if You Can | © Dreamworks SKG.

DiCaprio took on a more gritty biographical role in The Aviator, as he portrayed the life of Howard Hughes, an ambitious business tycoon, aviator, film-maker, and severe germaphobe afflicted with obsessive-compulsive disorder. DiCaprio successfully presented a character in the midst of losing his mind; this thrilling Scorsese film allowed DiCaprio to excel in probably his most defining role as an epic actor, as he took on the challenge of a character who suffered deeply with a severe personality disorder. In one tragic scene he scrubs his hands with soap until they bleed, and has to wait for someone to open the door of the bathroom before he left, so that he did not have to touch the handle. It was this performance which got DiCaprio his first Best Actor nomination at the Oscars. He lost out to Jamie Foxx, who played Ray Charles in a biopic about the famed Soul musician. 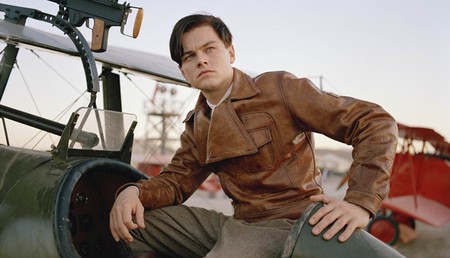 DiCaprio plays Danny Archer, a white South African mercenary and gunrunner, in this political war thriller set during the Sierra Leone civil war. The film is dramatic, thrilling and fast-paced, and depicts the desperate search for a rare blood diamond amid the atrocities of the war. As a confident, cocky, and hard-bitten diamond smuggler, DiCaprio really expressed his prowess as a masculine actor in this film, but also deployed his emotional mastery through a lonely character who desperately tries to have a different life. In one scene, Archer convinces rebel soldiers guarding a bridge that he was a prisoner, before shooting all three of them expertly, shocking his companion, skilfully presenting a flawed yet confident character with ease. The Academy noticed and honoured him with his second Best Actor nomination. Fellow Oscar-snubbed veteran Peter O’Toole was also nominated. Unfortunately, both lost out to Forest Whittaker and his brilliant performance in The Last King of Scotland. 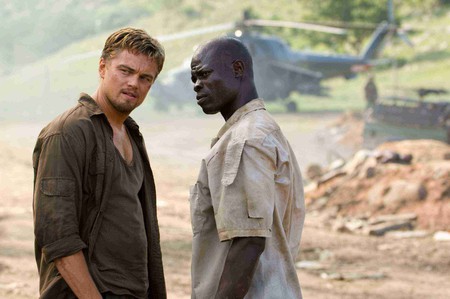 Scorsese once again supplied DiCaprio with an incredible foundation to build his character upon in this psychological thriller. Set in an asylum for the criminally insane on Shutter Island, two US marshals, Edward ‘Teddy’ Daniels (DiCaprio) and his partner, investigate the disappearance of a patient. DiCaprio’s portrayal of a flawed, mysterious character is thought-provoking, stirring, and purposefully perplexing. His outbursts of emotion in this film are exceptionally realistic, and representative of the character who doesn’t know who he is. Daniels is dark and inquisitive amid an incredibly clever film with dynamic twists and turns, and it is DiCaprio’s power as a master of emotions that supplies realism to the confusing and twisted plot. While the film went on to become director Martin Scorsese’s second highest-grossing film, the film didn’t receive a single nomination by the Academy or even by the Golden Globes. 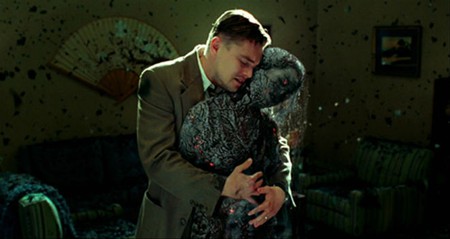 2010 was a great year for DiCaprio, as he also starred as Dom Cobb, a professional thief who extracts information from the subconscious of his targets. Amidst a large cast, DiCaprio shines as the leader of a team of criminals, given the task of implanting an idea into another person’s mind. Cobb and his team must delve into the different levels of their target’s subconscious, with the risk of entering into limbo if they do not succeed. DiCaprio successfully portrays a flawed character with a troubled past in this visually exceptional film, that brought a science-fiction vibe to ideas of the unconscious. Inception was big at the Oscars but most of its nominations were based on its stunning effects and cinematography, and amazing music and sound effects. If it eases anyone’s mind, none of the other actors were nominated either. 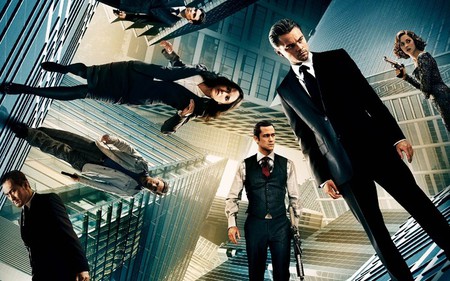 Nominated for Best Actor and Best Picture (DiCaprio was a producer)

In yet another Scorsese film, DiCaprio plays Jordan Belfort, who was involved in rampant corruption and fraud on Wall Street in the 1980s. Starring alongside an incredible cast – including Margot Robbie, Matthew McConaughey and Jonah Hill – DiCaprio presented the corporate greed, criminal activity, moral ambiguity, use of hard drugs, and explicit sexual experiences of Belfort in a humorous and captivating but serious and focused way. Through this role, DiCaprio was able to excitingly and disturbingly provide an illuminating look into excess. A particularly incredible scene of drug abuse shows Belfort losing all control of his body and having to crawl and then roll down a flight of stairs to get to his car; DiCaprio’s performance in this scene is so spectacular that you forget he is actually acting. It netted him his third Best Actor nomination and the film was nominated for Best Picture. It was tough year though with other big-hits such as 12 Years a Slave and Dallas Buyers Club also competing for awards. DiCaprio lost out to Matthew McConaughey in the latter movie, who ironically portrayed Belfort’s mentor and boss. 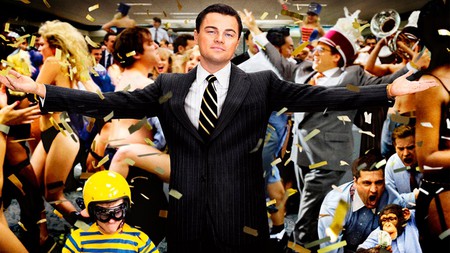 Tarantino’s masterpiece Django Unchained pitted Jamie Foxx against DiCaprio in a dark and brutal modern take on the Western genre. DiCaprio played a wicked plantation owner, Calvin Candie, a vain, evil, and aggressive character within a backdrop of barbaric, gory, and cartoonish violence. DiCaprio really gave this role his all; in one scene he slams his hand down on a table and slices it open on a glass, but continues to act, even beginning to pick pieces of shattered glass out of the wound in an unsettling manner, speaking to his dedication to the role. While fellow co-star Christoph Waltz was nominated by the academy (and eventually winning Best Supporting Role), DiCaprio received no Academy nominations. As if to rub salt into the wounds, he lost out on a Golden Globe too, losing the Best Performance Supporting Actor to of all people, Christoph Waltz. 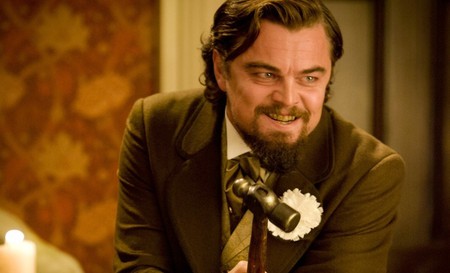